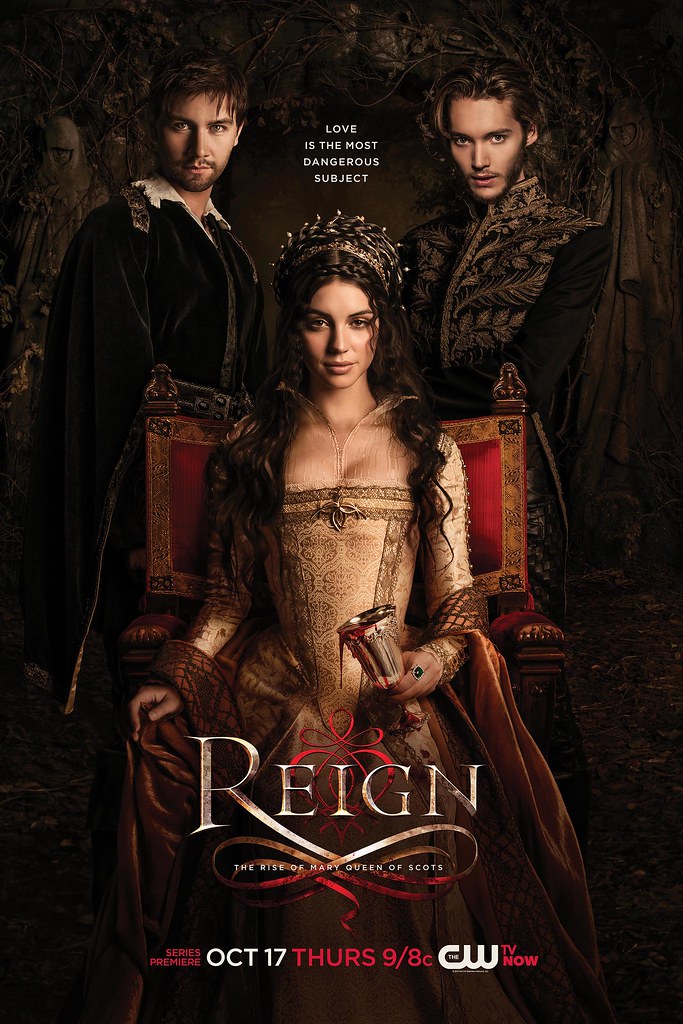 The highly fictionalized series follows the early exploits of Mary, Queen of Scots. The first season opens in 1557, with Mary living in the French court and awaiting her marriage to Prince Francis, to whom she has been engaged since they were six. Mary has to contend with changing politics and power plays, as well as her burgeoning feelings for Francis and the romantic attentions of Francis’s bastard half-brother, Bash. Francis’s mother, Catherine de’ Medici, secretly tries to prevent the marriage following Nostradamus’s confidential prediction that the marriage will lead to Francis’s death. The series also follows the affairs of Mary’s Scottish handmaidens Kenna, Aylee, Lola, and Greer, who are searching for husbands of their own at French Court.

The second season opens after the death of King Henry II and follows the rise of Francis and Mary as King and Queen of France and Scotland. Together they have to balance their marriage with their roles as monarchs and deal with the rising religious conflict between Catholics and Protestants, as well as the ambitions of the rival House of Bourbon for the throne of France.

The third season follows Francis’s declining health and his death partway through the season, leaving Mary a widow and struggling to find new footing since she’s no longer bound to France as its queen. Francis’s brother Charles is crowned the new underaged king, with Catherine as regent. The third season also introduces the court of Queen Elizabeth of England, who plots against Mary, fends off marital prospects, and deals with her secret love affair with Robert Dudley.

The fourth and final season has Mary returned to Scotland and trying to regain power in her homeland. She has to manage her allies, such as her bastard half-brother James and the outspoken Lord Bothwell, as well as her enemies, such as the Protestant preacher John Knox. Tensions mount between Mary and Elizabeth, with Mary marrying Lord Darnley, an English Catholic claimant to the English throne, in the hopes of taking England. In France, Catherine has to protect her son, King Charles IX, from the ambitions of her daughter Queen Leeza of Spain and her younger son, Henry.

I’ve watched Reign since 2014 when the series was in the middle of its second season. My best friend told me about Reign and I decided to watch it too. Basically, Reign is about Mary, Queen of Scots. To those who don’t know about her, please allow me to explain.

Mary, Queen of Scots, or Mary Stuart was the Queen of Scotland in 1542-1567. She was crowned when she was only six days old when her father, King James V of Scotland died and she’s the only surviving legitimate child. She spent her childhood in France while the ruling of Scotland was taken over by her regents. She then married the Dauphin of France, Francis. When Francis was named King of France, Mary became the Queen Consort of France. That’s all the knowledge of Mary, Queen of Scots, that I knew of, the first time I watched Reign. Though, later on, I read more about her because I wanted to know what happened to the real Mary Stuart.

The first time I saw Reign, my first thought is the amazing clothes. The dresses worn by the ladies were beautiful. However, I don’t think the dresses really fit that era. Not that I’m an expert on that department, but from what I’ve seen so far in several historical films in that year, those dresses really didn’t fit in. Some maybe but others looked to modern to be in that era. I am not complaining, really. At the end of the day, those clothes made all the settings of Reign looked more beautiful. 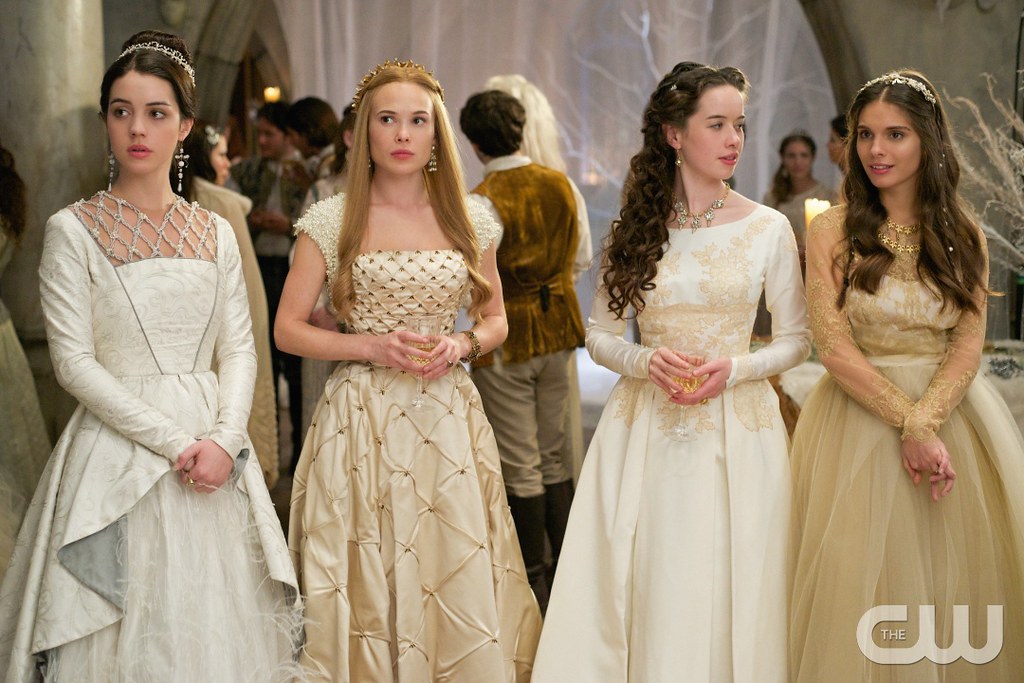 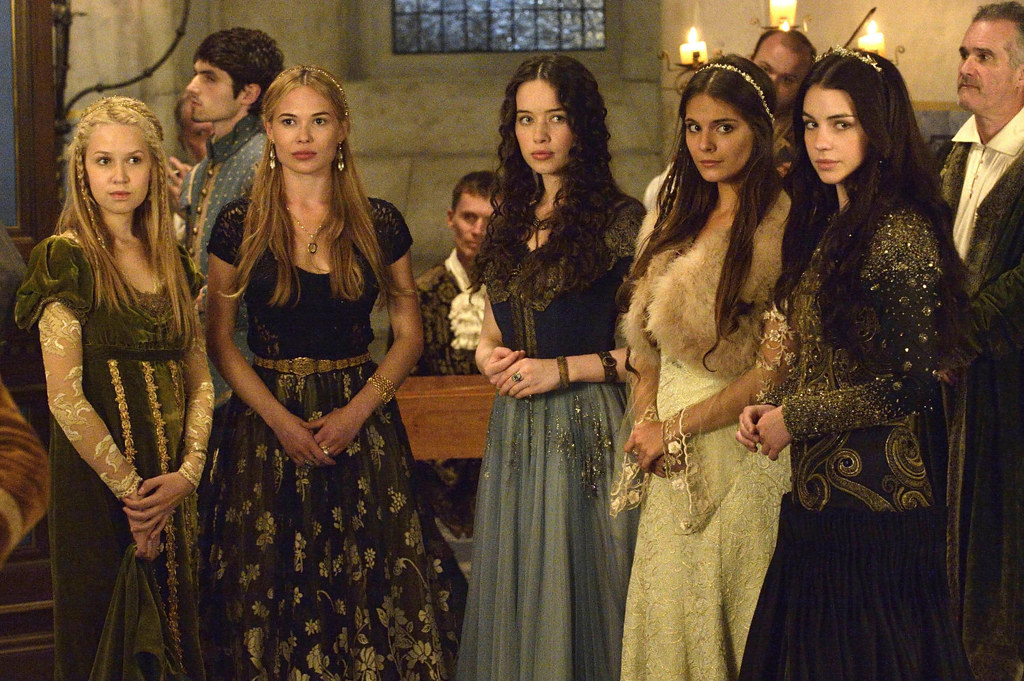 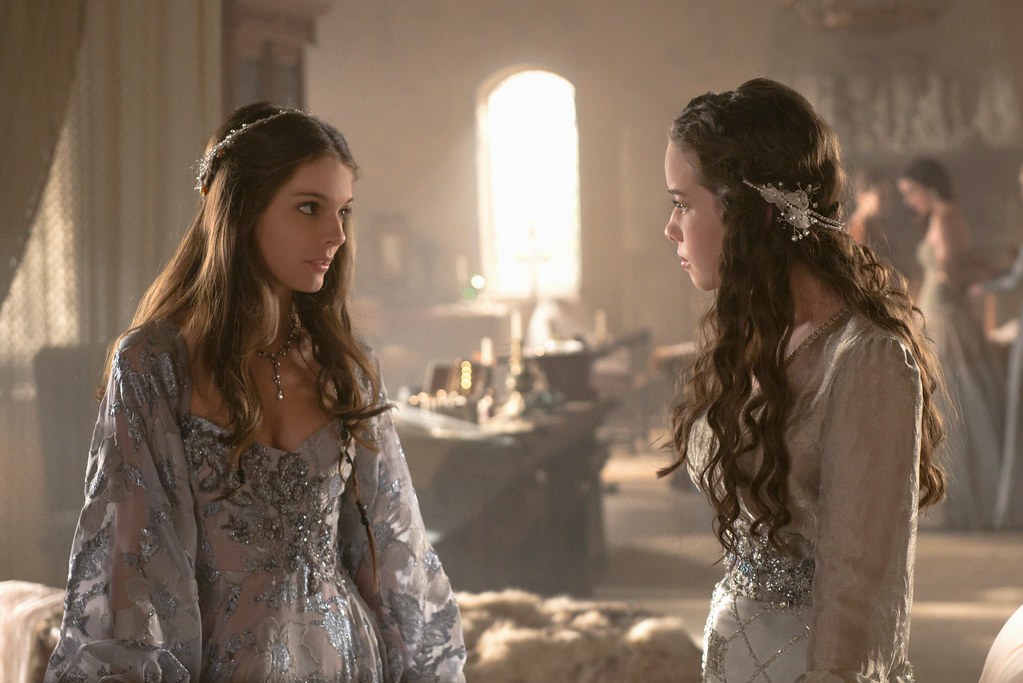 All the characters spoke English really well even though Reign was supposed to take place in France. I am sure they switch language from French to English is to make the story easier to tell and easier for the viewers to understand. I am sure if they wanted to, they could make it in French. But let’s face it, it must be a lot easier if they used in French seeing all the cast are either from Australia, Scotland, Canada, England, or America. Neither from France. So, despite being impossible for all of them to speak English, I will let it slide this time. Besides many other royal historical films used the English language as their main language for the films even though they were telling a royal family from a country who doesn’t speak English.

Every actor and actress played their roles really well. I’ve never seen any of the actors and actresses before except Anna Popplewell who played Susan Pevensie in The Chronicles of Narnia films. I didn’t know what to expect from all the actors and the actresses, but they did great throughout the series. It wasn’t always perfect but I still enjoyed watching them for four seasons. It wasn’t rather unfortunate when some cast left the show too soon for whatever the reason was. I was hoping to see the story of Francis and Mary longer but seeing how the history went, we would know that eventually, it wouldn’t happen. At least not as long as anyone hopes for.

The love story of Mary Stuart and Francis was beautifully made. No matter what the obstacles were, they would overcome it and eventually proved us their true love. The writers seemed to want to make another royal true love story after Prince Albert and Queen Victoria. First of all, the story of Mary Stuart happened five centuries ago and so we would never really know whether Mary did love his first husband or it’s just another marriage of political issue. We all know Queen Victoria and Prince Albert married because of love, seeing how loyal Queen Victoria towards her husband even until her death. She always wore black for the rest of her lives because she was still grieving of his husband’s death. She even laid down all of Prince Albert’s clothes every morning. Or so I’ve heard. So I believe the love of Queen Victoria and Prince Albert is real and true. Queen Victoria never married again, though some rumours about she was closed with some men were surfaced. I can’t say the same about Mary because she married two times more after Francis’s death. So either she really loved Francis and the other marriage is just a matter of political issue or each marriage is just about politics, I really can’t say. Therefore, let’s just judge her story by the story told in Reign. Let’s assume that Mary Stuart and Francis are really true love couple. The chemistry between Adelaide Kane and Toby Regbo as Mary and Francis is just great and therefore making the audiences hoping that the real Mary and Francis were just as sweet as them. Though I rather doubt it, but one can hope, right?

I think Adelaide Kane and Toby Regbo have shown us a very nice chemistry. They made Mary and Francis a very nice couple that everyone is rooting for. You can clearly see the love in their eyes when they looked at each other. It’s just amazing. It’s hard to imagine Mary ended up with other men when her chemistry with Francis was just so strong. However, as amazing Adelaide Kane is, she managed to make good chemistry with Mary’s next love interest. My favourite will be when Mary is with Lord Bothwell, portrayed by Adam Croasdell. They too have great chemistry, but I can’t lie, I prefer Mary with Francis. I don’t know historically how Mary ended up with Lord Bothwell but I think in the series, how they ended up was a bit different from the history. I prefer they stick with the history but I don’t mind some changes. After all, the series is not entirely true to history. Some were made up as fiction. 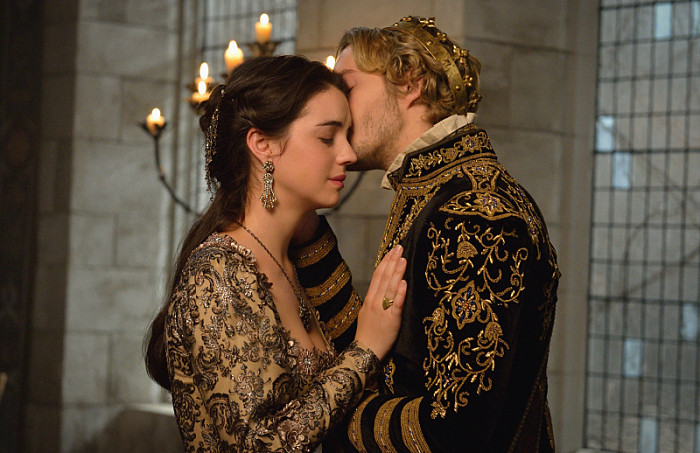 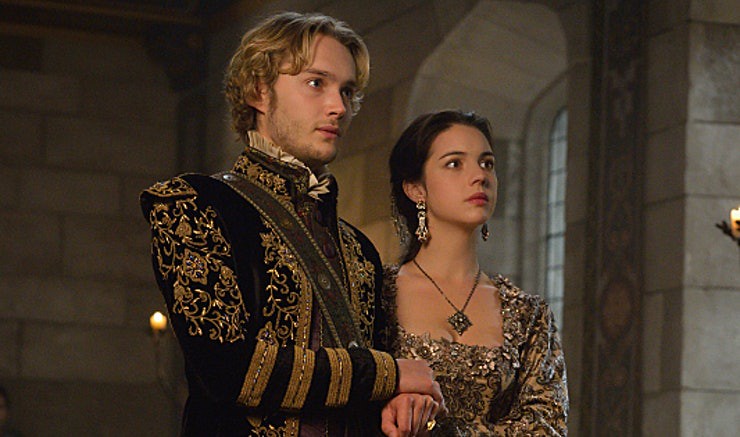 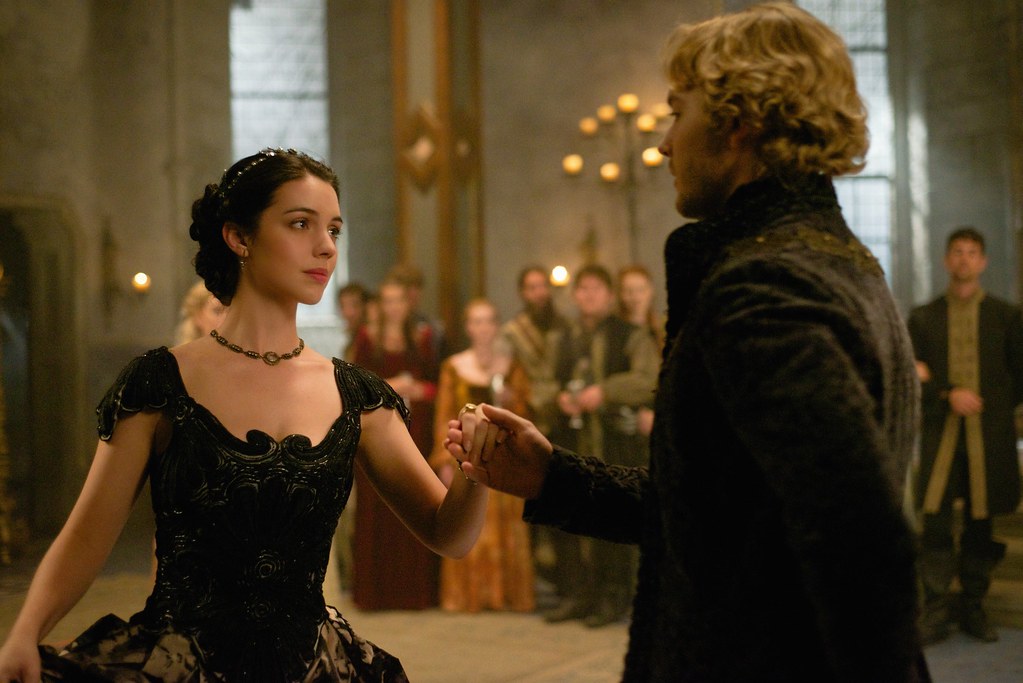 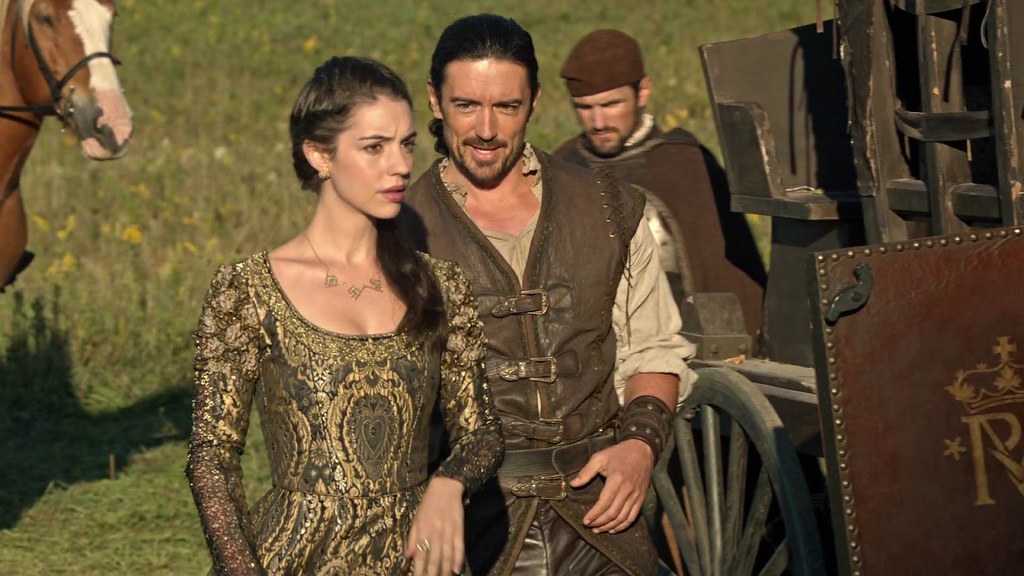 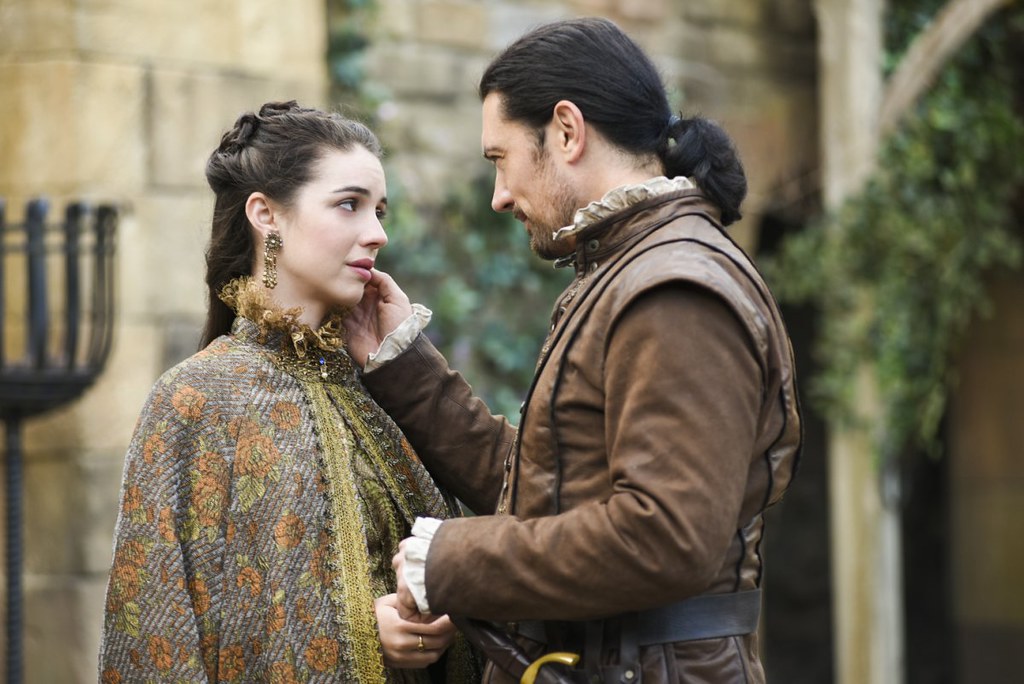 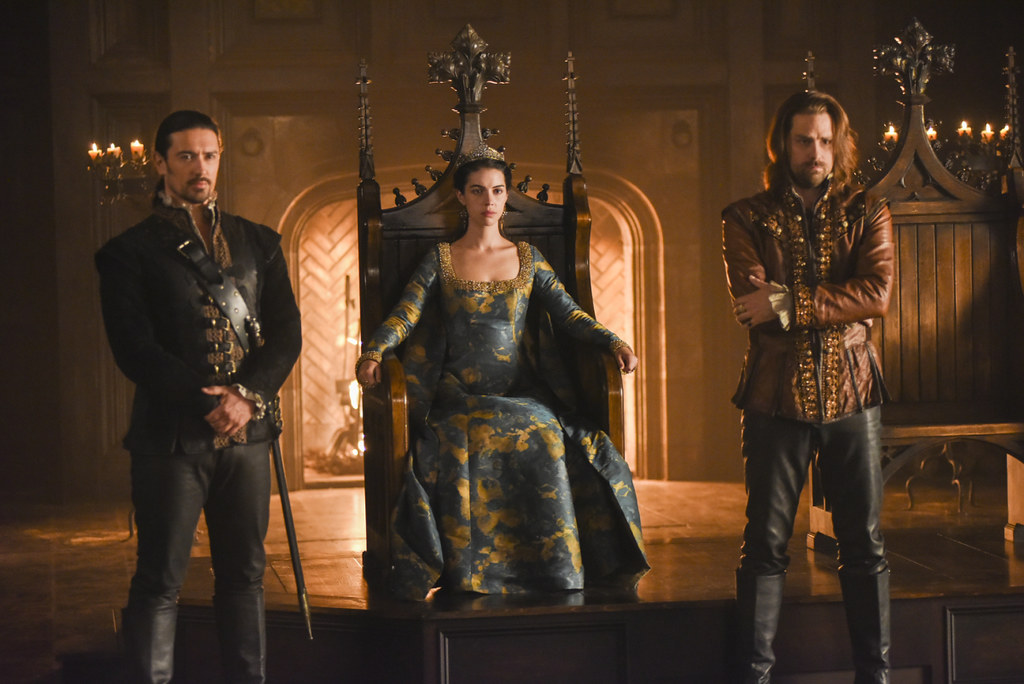 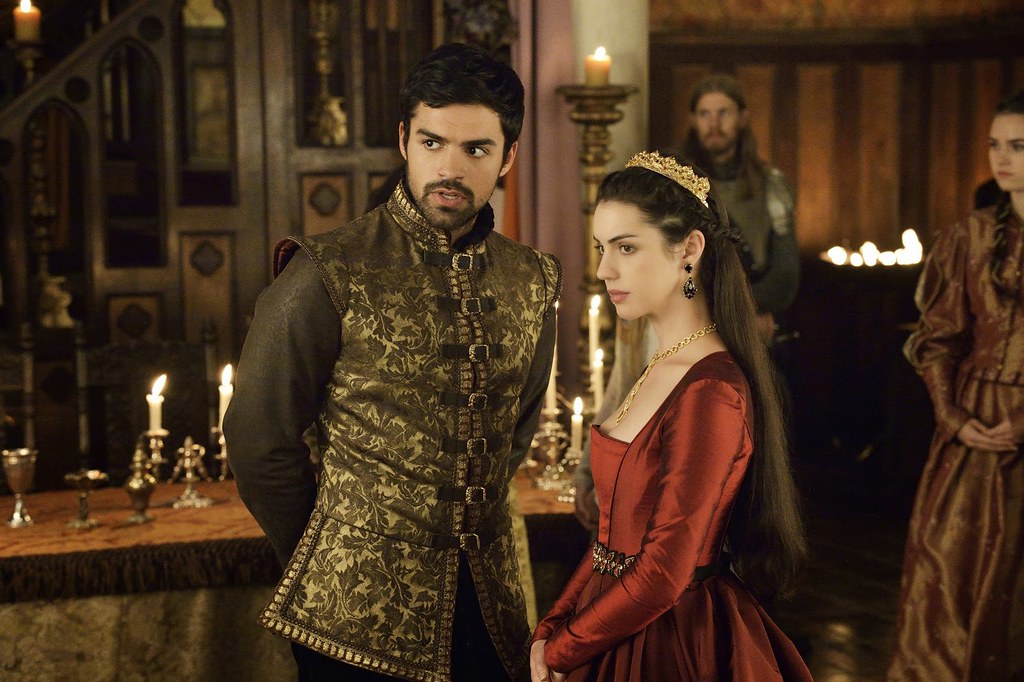 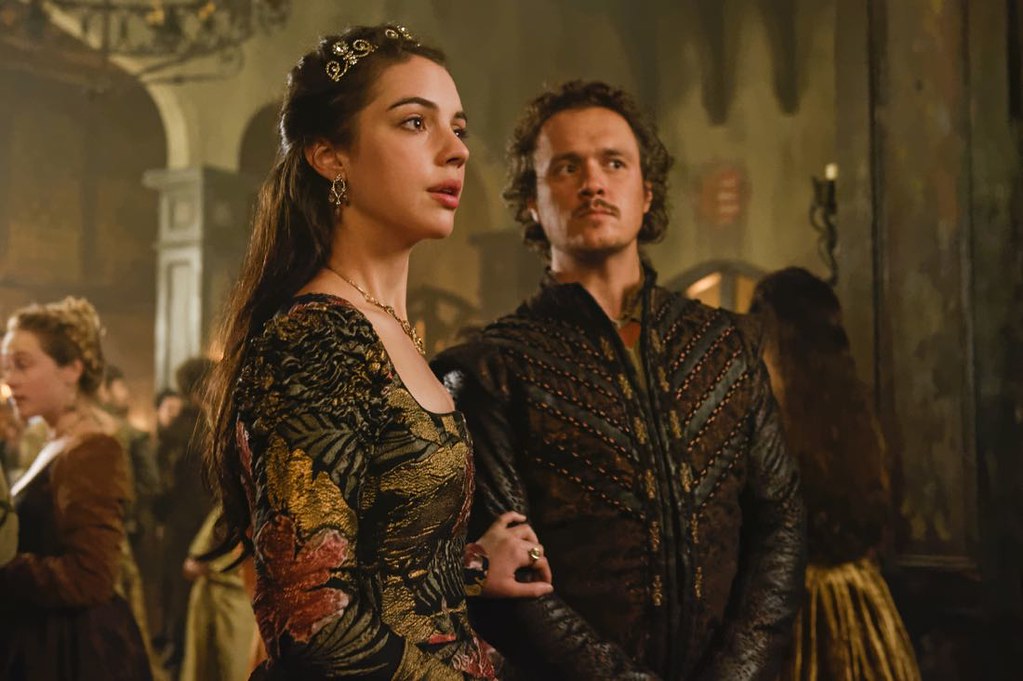 Anyway, I knew from history how the end of Francis will be. That is why, throughout the series, I was pretty anxious. I love his character and his relationship with Mary. At certain points, I felt bored with the story but eventually, I finished watching it until its finale. I am quite disappointed with its ending but I think it does fit everything historically. It does fit, yes, but I felt like everything was being rushed towards the end. It’s like they wanted to end the series so quick, that everything was done in the final episode. Yes, not the final series, but the final episode. That’s how quickly things turned out to be. It’s not shocking how things turned out for Mary since I know the history, but still, I am sad. I don’t know what happened in the past but since Reign is about Mary, I grew fond of her instead of Queen Elizabeth I, which they made as the antagonist here.

Many characters turned out to be good after looking so bad in the beginning. And some even turned to be bad after looking so good during their introduction. I certainly like watching the relationship between Mary and Catherine de’ Medici. Their love-hate relationship is just funny and thrilling. They were enemies at one point and then best friends at other points. After being friends for so long, they can back to square one and be enemies again. One time they tried to stab each other’s back or put a knife on each other’s throat, the next thing they would gang up and destroy their enemies together. It kept going on and on throughout the series. Although it sounded boring, it actually didn’t. It’s actually exciting to see how much their relationship will end towards the ending. 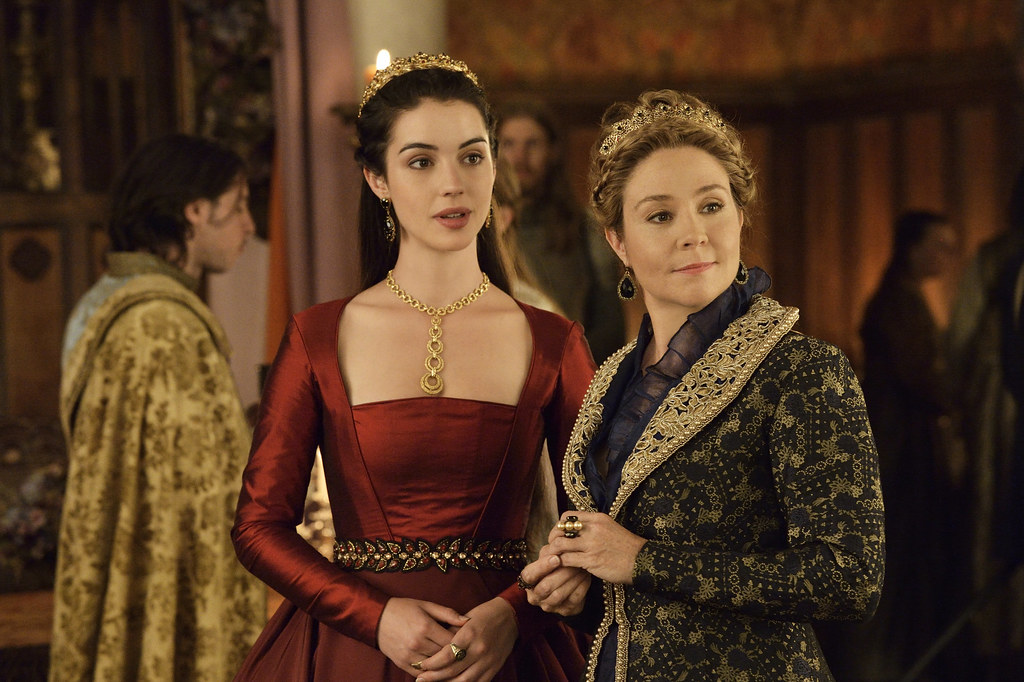 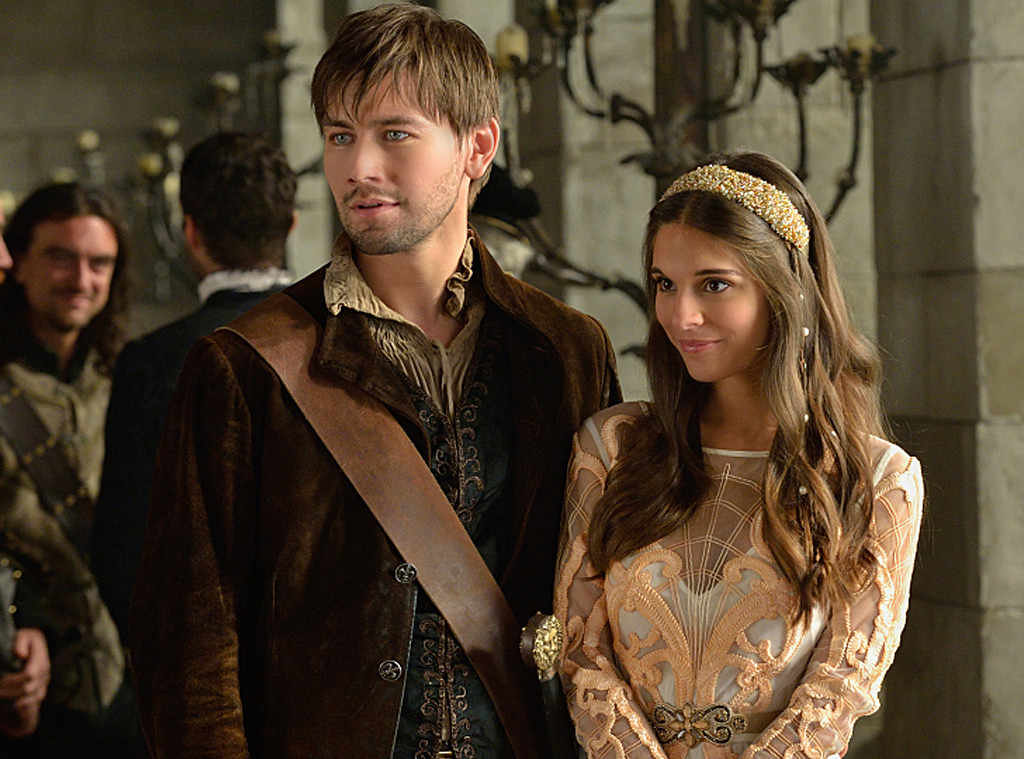 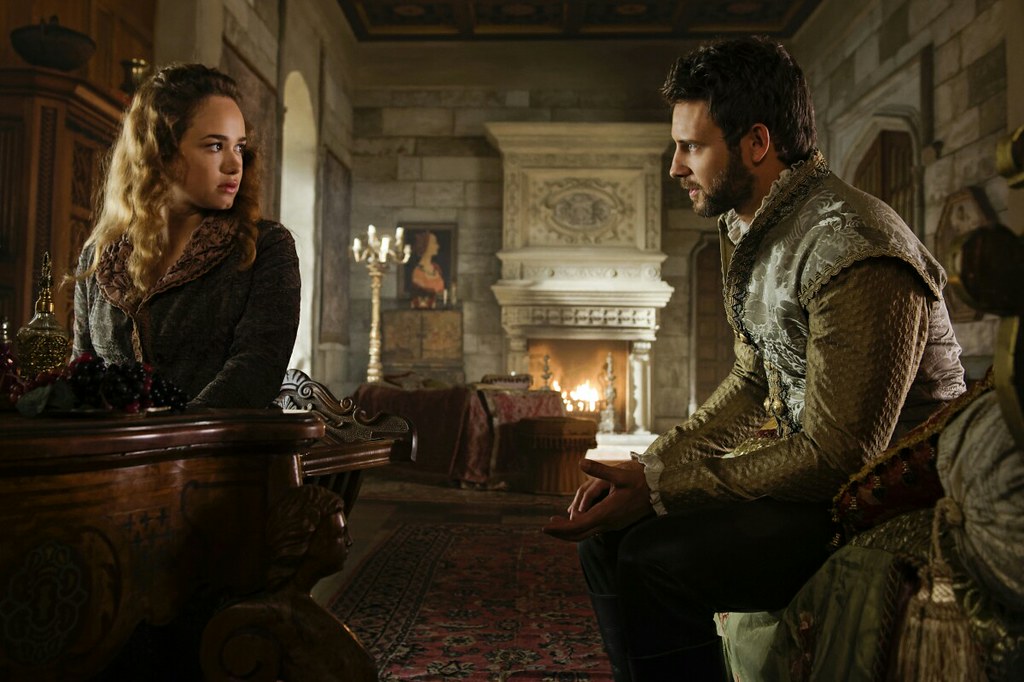 There are certain characters that I would like to see the ending. I mean a real ending, not just a hung up one. Like Kenna, played by Caitlin Stasey. I love Kenna ended up with Sebastian ‘Bash’ de Poitiers, played by Torrance Coombs. However, how things ended with them, that’s what I don’t like. It’s like their problem has not yet finished but all of sudden Caitlin Stasey decided to quit the show. I don’t know if it’s the actress wanted to quit or the writers wanted to scratch her character from the story. Either way, I don’t like how things turned out. I also like Princess Claude, portrayed by Rose Williams. She seemed annoying at first but became more likeable as the series went by. I like her chemistry with Jonathan Keltz who played Leith Bayard. Princess Claude and Leith Bayard are funny and cute together. They may be one of my favourite characters in the series. However, I also like the chemistry between Princess Claude and Lord Luc Narcisse, portrayed by Steven Lund. It is very disappointing how Princess Claude got her ending after all she’s been through.

All in all, I like Reign. Despite its disappointing ending—well, kind of disappointing. I always love historical drama. I love the clothes, the setting, and the love story. I also like the conflict and the overall plot story. I wish they could do more about the ending, but Reign is still one of those TV series you need to watch if you love watching historical dramas.