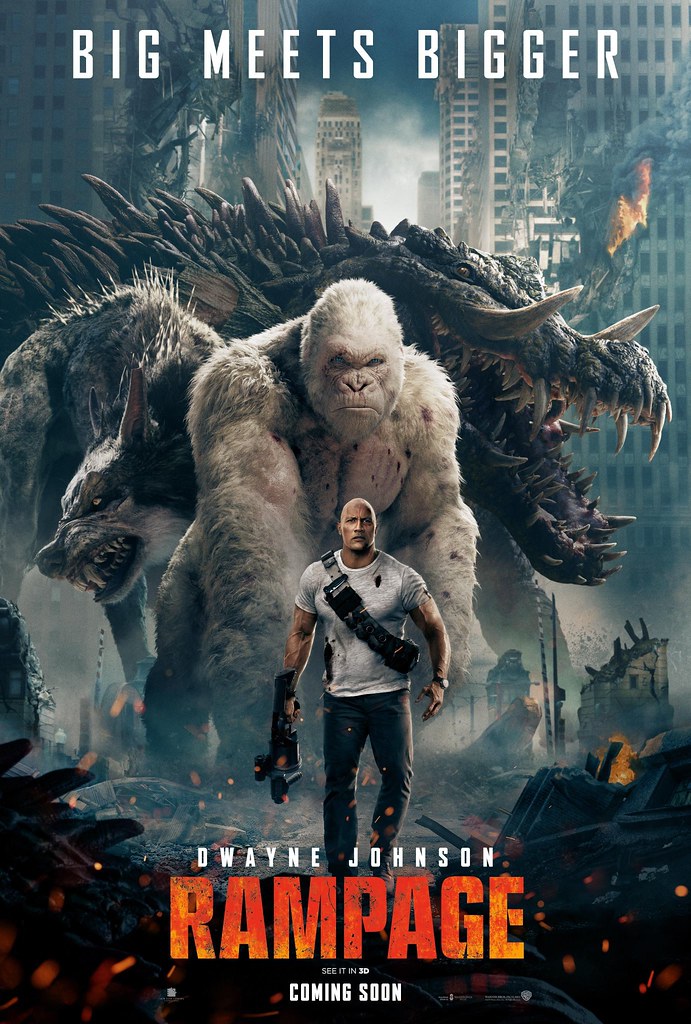 Davis Okoye (Dwayne Johnson), a man who keeps people at a distance but shares an unshakable bond with George, the extraordinarily intelligent, incredibly rare albino silverback gorilla who has been in his care since he rescued the young orphan from poachers. But a rogue genetic experiment gone awry mutates this gentle ape into a raging creature of enormous size. To make matters worse, it’s soon discovered there are other similarly altered animals. As these newly created alpha predators tear across North America, destroying everything in their path, Okoye teams with discredited geneticist Kate Caldwell (Naomie Harris) to secure an antidote, fighting his way through an ever-changing battlefield, not only to halt a global catastrophe but to save the fearsome creature that was once his friend.

Anyway, let’s start this new month by talking about Rampage. I know this film is so last month but I have just barely watched it last week either. Luckily before Avengers: Infinity War because apparently when that film came out, all other films went down, including Rampage. Only a few theatres were still playing this film. I have no idea what Rampage is about, except it was played by Dwayne Johnson and Naomie Harris. It’s about virus or something genetic and finding a cure and involving an albino gorilla which based on the one and only real albino gorilla named Snowflake which died in 2003. As far as I can tell, that’s the only thing about Rampage that I knew.

Basically, Rampage is San Andreas with gorilla and monsters in it. The main character is still played by Dwayne Johnson, but the woman was now played by Naomie Harris. The antagonist is played by Malin Åkerman, whom I first thought was Briana Evigan who played as Andie West in Step Up 2: The Streets (2008) and Step Up: All In (2014)—seriously, they looked so similar. Well, of course, Rampage does not really have the same story like San Andreas but both films basically have the same feeling. Not the story, but only the feeling.

As always, Dwayne Johnson knew how to entertain the audience when showing off his fighting skill and survival actions. In a film like this, people will often think ‘how the hell he can still be alive?’. Well, of course, the answer would be, ‘because he is the main character’. But still, this kind of film will make one thinks such thought. If it’s a real world, I don’t think anyone can survive after falling down from hundreds of meters tall or being thrown away here and there and yet survived without any broken bones but just a few drops of blood or scratches and bruises. It’s just too impossible to imagine. However, knowing all that impossibility, the audiences are still pretty much entertained by all the survival skills in films like Rampage.

Davis Okoye: Kinda wish I could’ve knocked him out too, though.
Dr. Kate Caldwell: You do know there are other ways of dealing with people, right?
Davis Okoye: I do know that, yeah, but they’re not as fun.

Of course, Naomie Harris also knew what she was doing. I expect her role as Kate Caldwell to be bigger than now. After all, she is the geneticist who found out about combining DNA and thus making the disaster happened. But what can I say when the poster for Rampage is only showing Dwayne Johnson, the gorilla, the monsters? I think it does explain a lot about this film. Still, Naomie Harris managed to do her role really well. I always amazed with actors and actresses that can do different accents really good. I think Naomie Harris pulled off the American accent. I don’t if it’s flawless or not since I am not a native myself, but as far as I can hear, her accent is good. If I didn’t know she’s British, I would probably think she is American for real.

You can’t separate film like this from CGI effect. That’s for sure. Everything was being edited with CGI effect, including the gorilla. As I have stated before, the real albino gorilla has died 15 years ago. Even if he hasn’t died, there’s no way he could act as a giant gorilla without any help from CGI. Therefore, the editors of this film have to do extra nights to make things done—and not just done but also perfectly done. Although the effect is not without flaws, they were still looking great and I think the audiences can enjoy the whole story.

“Of course the wolf can fly.” – Davis Okoye

The action is good but not great. I was waiting for something unexpected to happen, but unfortunately, it didn’t happen. Although, that doesn’t mean I didn’t enjoy the film because I did. Dwayne Johnson knew how to entertain people with his bold action. Since this is more of a serious film, I kind of miss his humour sarcasm. Nonetheless, he did great.

All in all, Rampage is a good film to enjoy. Is it great? Well, define great. I myself don’t think it’s a great nor terrific film, but I was able to enjoy the story and the action throughout the film. Rampage may not be the greatest, but it’s still enjoyable to watch in one sit.