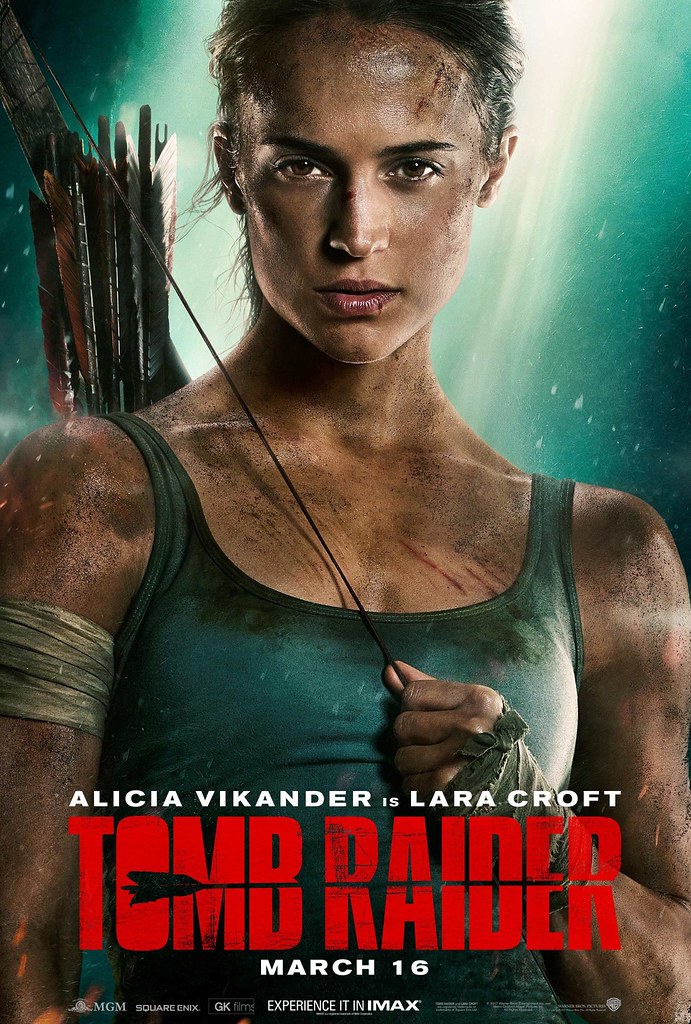 Lara Croft is the fiercely independent daughter of an eccentric adventurer who vanished years earlier. Hoping to solve the mystery of her father’s disappearance, Croft embarks on a perilous journey to his last-known destination—a fabled tomb on a mythical island that might be somewhere off the coast of Japan. The stakes couldn’t be higher as Lara must rely on her sharp mind, blind faith and stubborn spirit to venture into the unknown.

Tomb Raider is one of the most anticipated films this year by me and perhaps by most people out there. People who were born in the 1990s or 1980s must have known about Tomb Raider. The game itself was played by so many people around the world. Not to mention, the first Tomb Raider films, i.e. Lara Croft: Tomb Raider (2000) and Lara Croft: Tomb Raider – The Cradle of Life (2003), were played by none other than Angelina Jolie. The films were iconic and very exciting at that time. Though the CGI effect wasn’t as perfect as now, I am still amazed by how the films were developed. They were amazing. Not to mention that the main star of those two films was also iconic. No wonder people started to compare between Angelina Jolie and Alicia Vikander. I knew it took me a long time to write this post when I’ve watched the film weeks ago, but please do spare me. So without further ado, let’s start talking about the film.

I won’t compare between Angelina Jolie or Alicia Vikander, because I don’t think it would be fair for them. They are a very different people, from a different generation. I haven’t admired Angelina Jolie then as I admired her now, but I did think she looked awesome as Lara Croft. Meanwhile, I already like Alicia Vikander ever since she played a role in The Man from U.N.C.L.E. (2015) and also The Danish Girl (2015), in which she won an Oscar. You can think that my opinion of her as Lara Croft in Tomb Raider has become bias, but let me tell you that it’s not the case. I wasn’t being biased. Apart from I like Alicia Vikander, I really do think she suited the role. Is she better than Angeline Jolie? No. Is Angelina Jolie better than Alicia Vikander? I don’t think so too. Both of them have their own characters. They brought the characters in a different way. Like I’ve said before, I won’t compare both actresses in playing Lara Croft because I’m sure the scriptwriters also made both of them different. While Angelina Jolie’s Lara Croft is sexier, flirtatious, and bold, Alicia Vikander’s Lara Croft has more grit and relatability. Although I can’t say which of the two actresses played a better Lara Croft, I can choose which Lara Croft I’d prefer but that doesn’t mean the one that I choose is better because like I’ve said, both actresses are great and they have played the character really well.

Alicia Vikander’s Lara Croft showed a more vulnerable side. A side that made her like a normal human, just like other daughters when they lost their father—or more likely her father disappeared mysteriously. Alicia Vikander’s Lara Croft is fierce and tenacious while still grounded and believable. I think that’s the reason why I like her version of Lara Croft more than Angelina Jolie. Though Angelina Jolie portrayed the character really well, I like a more down-to-earth and vulnerable Lara Croft. With her personality, it’s more believable that she went on an adventure that normal people wouldn’t ever go. Of course, the fact that Lara Croft is a brave and rebellious girl also the main reason why she went on such dangerous quest. Plus, Alicia Vikander’s Lara Croft used archery as one of her weapons, making her more traditional and making me like her more.

Alicia Vikander portrayed the character of Lara Croft really well, even to the point how bulk her body looked like. She needed to do serious training in order to achieve that body. Plus, she has to practice her endurance because doing the action scenes that Alicia Vikander needed to do weren’t easy either. Surely must have stunt doubles, but still, she did need to maintain her body and endurance. She couldn’t rely on her stunt double all the time. Therefore, we can say that Alicia Vikander took the job seriously. She didn’t play it half-heartedly because seriously, that body doesn’t just get there when you’re not serious and only half-hearted. As an Oscar-winning actress, it’s no wonder Alicia Vikander did her job really well. Be it a normal scene or action scenes, she did everything just spot on. I am not saying that she is better than Angelina Jolie or she replaced Angelina Jolie just fine because like I’ve said before, I am not comparing the two actresses. But, Alicia Vikander did do justice in portraying her version of Lara Croft. So, lots of praise to Alicia Vikander! As an audience, I am really entertained with her performance. With her husky voice and unique accent, Alicia Vikander made her Lara Croft sexy in her own way. 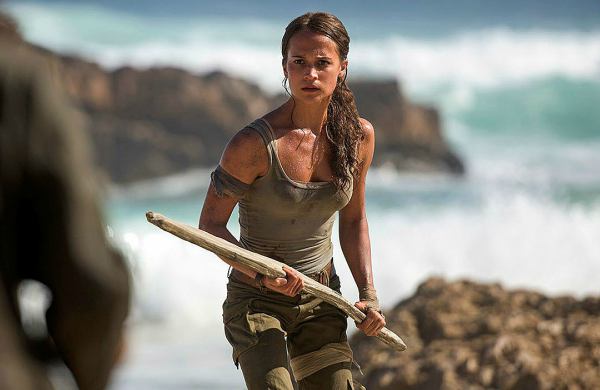 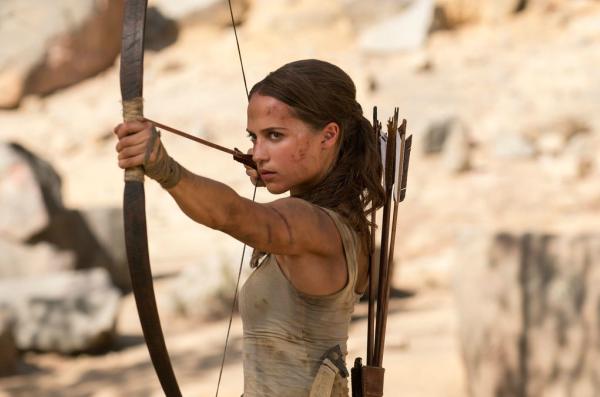 I was hoping Daniel Wu’s character in Tomb Raider made more appearances than now. It would be more exciting to have him on screen longer than what he had now. However, although Daniel Wu’s part in Tomb Raider was not major, his performance was still entertaining. Daniel Wu has played in English-speaking films before, like Warcraft: The Beginning (2016) and Geostorm(2017), so no wonder that his English is good and flawless. He is a very good actor and can balance Alicia Vikander’s acting just fine.

“All myths are foundations of reality.” – Lord Richard Croft

Lord Richard Croft a.k.a. Lara Croft’s father was now played by Dominic West. To be honest, I don’t recall whether I’ve watched his films before or not because I don’t remember. His face looked pretty familiar, so does his name. However, I really can’t remember where I have seen him in a film. Nevermind about that, Dominic West’s performance was good in the film. Although I kind of confused with Lord Richard Croft’s personality, I do think Dominic West embodied the character really well.

Talking about a film like Tomb Raider, we can’t miss out the setting. Like the previous Tomb Raider films, this time also they picked a traditional place as the setting. However, if the previous Tomb Raider took place in Angkor Wat and Terracotta Tomb, this time they used Devil’s Sea, the Bermuda Triangle of Pacific. I like how they improvised the mythology in a real world and made it into a story. The scriptwriters knew how to combine and fit the mythology into their script.  It’s not the first time Tomb Raider used mythology stories that have been told and improvised them into their scripts. I mean, the first time they used Illuminati’s Triangle—though I kind of forget what it could do—and the second time they used Pandora’s Box which basically a myth. I thought Himiko was something the scriptwriters made up, but no. That’s not the case. Because there was a Queen in Ancient Japan named Himiko. They said she was a shaman, just like how she was described in the film. Though what happened afterwards, I don’t exactly know for sure, but the scriptwriters knew how to make those legendary stories into something worth watching. So good job on that.

Of course, films like Tomb Raider will always rely on CGI effect. Although CGI effect is not everything, still you can’t deny the fact that CGI effect can fulfil the filmmakers’ imagination. However, if they edited it wrong, those imaginations would look fake. I am not saying Tom Raider’s CGI effect was without flaws, but certainly, they were still great and convincing. At least I enjoyed watching the film. Plus, with Alicia Vikander and other casts’ great acting skills and a great storyline, Tomb Raider became a very enjoyable film to watch.

I don’t know about the game, but they said Tomb Raider is one of the best games. I never played the game before, so I can’t compare it or anything but I am sure people who love the games will be curious about the film. Whether they would love it or not, is another matter. From what I’ve read so far, films that were based on games ended up disappointing. Not every time, of course, but I think most of the time. The action sequences were great, but usually, the story was disappointing and unclear. I can’t say this Tomb Raider film has a very clear story, but I do like the story plotline. I also like how Alicia Vikander portrayed the character of Lara Croft. I think she nailed it.

All in all, I really did enjoy watching Tomb Raider. It may not be the best film or the best film based on games, but at least I enjoyed it. I still prefer Prince of Persia: The Sands of Time (2010), if we’re talking about which film based on video games I prefer more. However, if I have to choose this Tomb Raider with the previous Tomb Raider films played by Angelina Jolie, well, I can’t decide. In merely CGI effects, I would prefer this Tomb Raider since well, technology has become so advanced so they can edit and smooth the CGI effect more perfectly. I can’t choose between Alicia Vikander’s Lara Croft or Angelina Jolie’s Lara Croft because both actresses have done really well and played the character in their own way. It wouldn’t be fair to compare them. Nonetheless, I enjoyed watching all Tomb Raider films, including this year’s Tomb Raider. I look forward to another sequel of Tomb Raider played by Alicia Vikander. I think she really fit the character of Lara Croft.