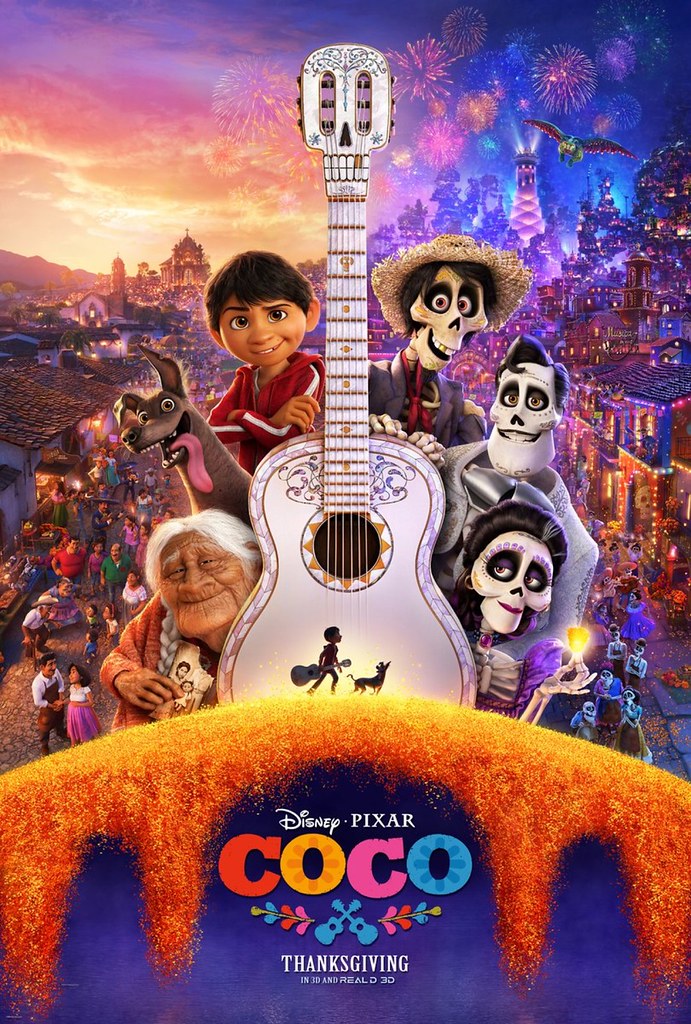 Despite his family’s generations-old ban on music, young Miguel dreams of becoming an accomplished musician like his idol Ernesto de la Cruz. Desperate to prove his talent, Miguel finds himself in the stunning and colourful Land of the Dead. After meeting a charming trickster named Héctor, the two new friends embark on an extraordinary journey to unlock the real story behind Miguel’s family history.

I’ve been waiting to see Coco since the first time I watched the trailer. Even in the trailer, you would notice how beautiful and colourful the film would be. The concept of Coco is based on the Mexican holiday, Día de Muertos—Day of the Dead. Yes, the event is real, very much real indeed. I really like the idea how Disney now approached traditional culture from different countries. I’ve known about Día de Muertos from Spectre (2015) but that James Bond film didn’t really focus on the event itself, unlike Coco. From Coco, we knew more about the Mexican holiday culture and what’s the meaning of it. It’s very interesting and Disney definitely knew how to introduce a culture to the world in a unique way.

After successfully done with Moana (2016), I was really looking forward to seeing another Disney film that based on traditional culture. It’s ashamed that Moana didn’t win the Oscar for Best Animated Feature, though I’m glad Zootopia (2016) did win it because that film is also very good. I am not trying to jinx anything but I’m pretty sure Coco will win an Oscar next year either for Best Animated Feature or Best Original Song. Even if it didn’t win, I am still sure Coco would get nominated. Anyway, let’s start talking about the film.

“We may have our differences, but nothing’s more important than family.” – Miguel Rivera

In a matter of the story, I have never doubt that Disney will give us something great and Coco is no exception. Using Mexican culture, Coco gave us a very unique storyline. I can pretty much guess how the story will go by one-third of the film but I really don’t mind to keep watching it because I really found the idea of the story very interesting. The storyline is rather simple but still very exciting indeed. Not to mention the message that this film wanted to give to the viewers is something worth to watch and learn for. Coco is basically about music, about dreams, and most importantly, about family. There’s no romantic love but there is so much love about music, dreams, and family. It’s very good and at some points, very touching. There are so many scenes in the film that would teach you something. I’m always amazed at Disney because they knew how to deliver moral lessons in such unique way that not only the children can learn from the film but also the adults. 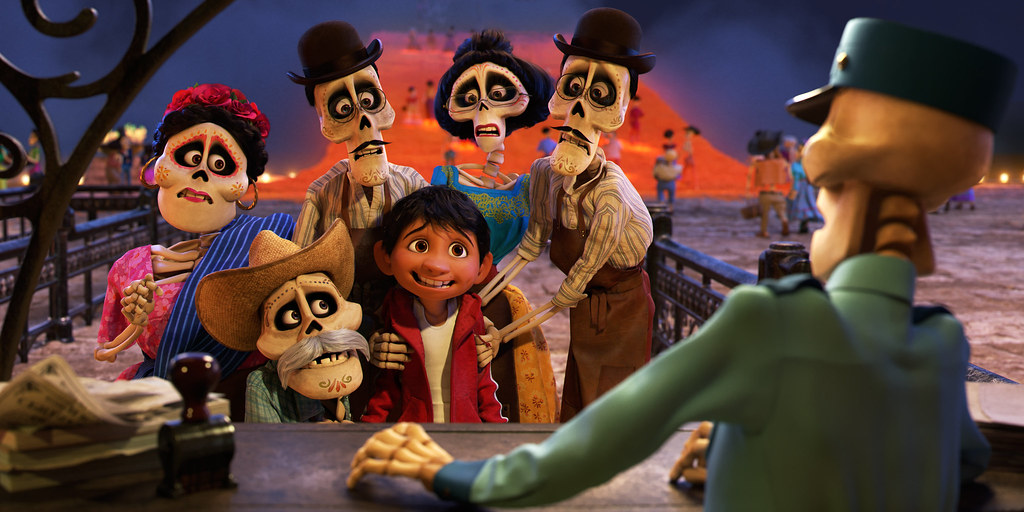 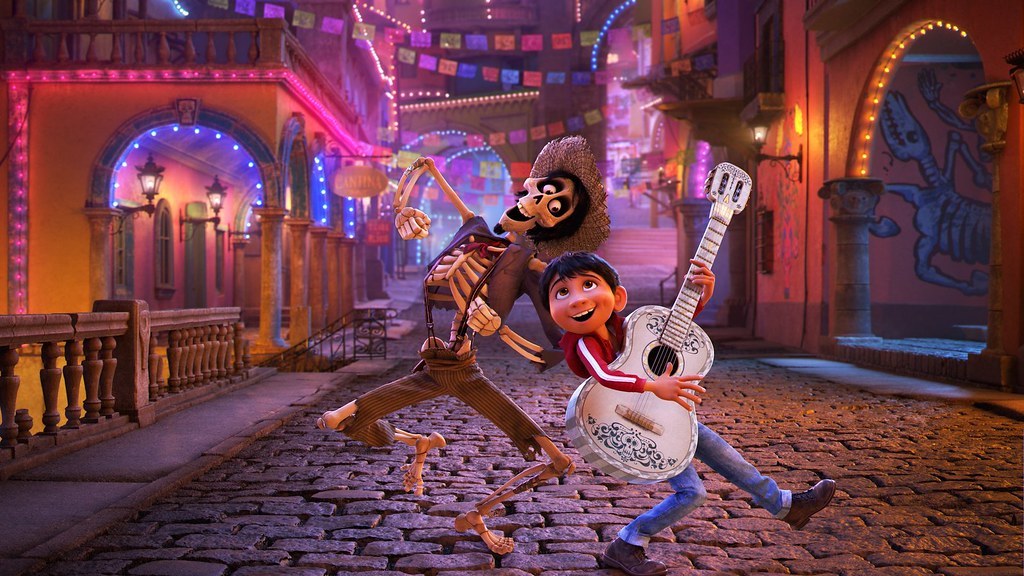 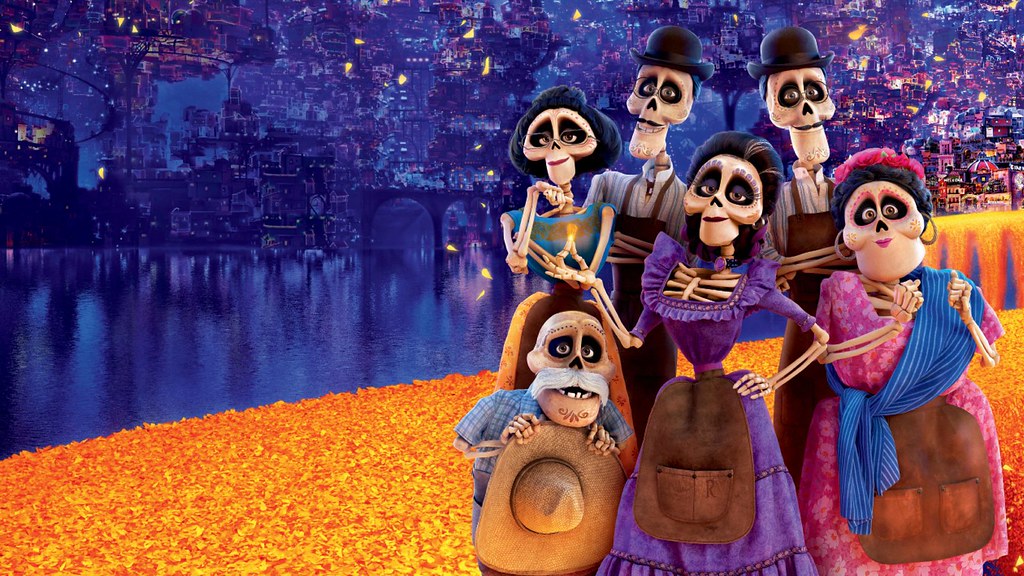 Like any other animated feature film, Coco also provides us with a very good laugh. It’s not the kind of laugh that would make your stomach hurt, but it’s the kind of laugh that’s refreshing. At least you’re going to giggle a lot because some scenes are funny. What’s great about Coco is the fact that the writers knew how to play the emotions of the audience. One time they gave us something funny, then the next thing they gave us something chill and sad. Yes, like all Disney animated film, there is always a catch and the catch is always something sad. My eyes became teary because of the scene. I am pretty sure many viewers will cry too since the story really touches the heart.

The adventure in the film is somewhat interesting and very exciting. The Land of the Dead sounds creepy but instead of making it black and white with creepy skulls, Disney managed to make it beautiful with lots of beautiful colour. The skulls were funny. Everything is very breathtaking to see. It’s not surprising since children would be watching this film so it would not be right to make it scary. Therefore, I am glad they didn’t make it that way and rather made them more beautiful. Seriously, I am amazed by the beautiful scenery. It’s very colourful and breathtaking. The attention to every detail of the culture is amazing. From the flowers to the ofrenda—offering in English—everything is thought perfectly.

“Never underestimate the power of music. No one was going to hand me my future, it was up to me to reach for my dream, grab it tight and make it come true.” – Ernesto de la Cruz

The actors and the actresses that voiced the characters in Coco are a mix of American and Mexican. Since Coco is about Mexican culture, I think it’s pretty understandable that they chose Mexican actors as well. Every one of them used the right English accent for the film to get the essence of an American-Mexican film. Although they didn’t have to act in front of the camera, they did a very good job in voicing the characters and made them real. Of course, the animation took a big part for an animation film but you still need the actors and actresses to voice those characters and not just voicing them but also put feelings into it so that the characters looked, heard, and felt real. All the actors and actresses have done a very great job indeed. All the songs sang in Coco are very Mexican felt. I like the songs, especially the one called Remember Me. The song was so touching and heart-breaking in some ways.

Like any other Disney film, Coco also has a sidekick character and this time it’s a dog named Dante. I don’t know why they picked a Xoloitzcuintli dog as the sidekick character since it wasn’t the cutest dog. However, I kind of understand why they used it. After all, a Xoloitzcuintli is a Mexican hairless dog and Coco is about Mexican culture. So everything fits the story perfectly. Seriously, I don’t know what to say more about Coco other than how terrifically good the film is. Disney really knew how to entertain children and even adults. 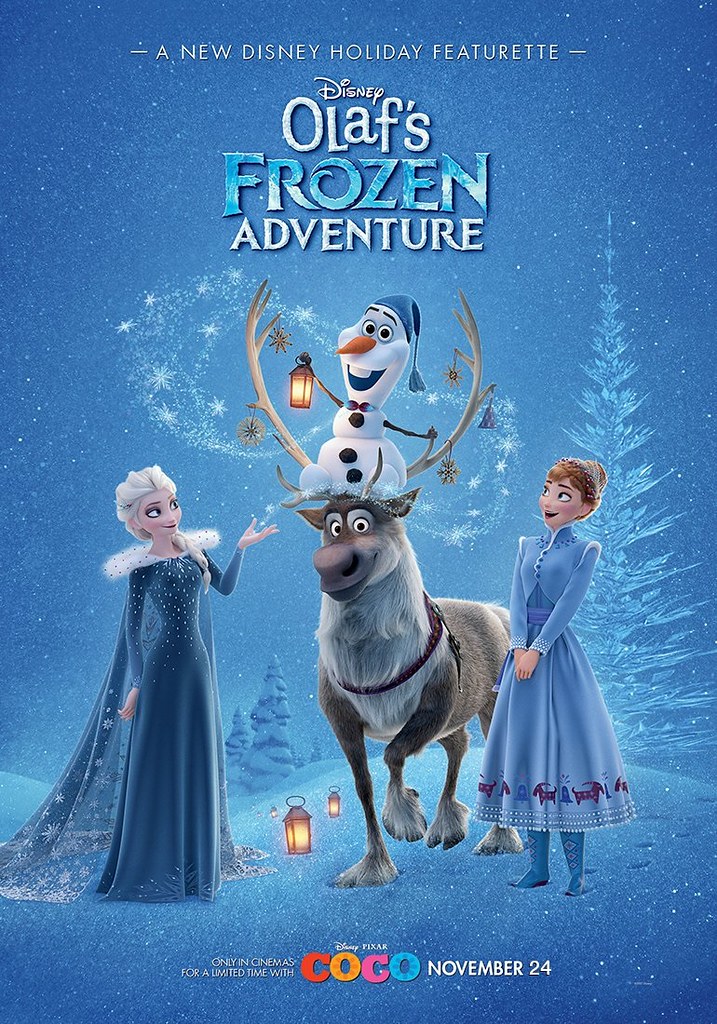 Despite the featuring of Olaf’s Frozen Adventure in the beginning, Coco still able to stand out and leave an impression on the viewers’ mind and even heart. Everything about Coco is beautiful. The animation, the scenery, the story, and especially the culture, everything is just beautiful. Coco is truly a remarkable animation film, not just for children but adults can also enjoy watching it. I really hope that this film gets an Oscar next year because this film definitely deserved it!