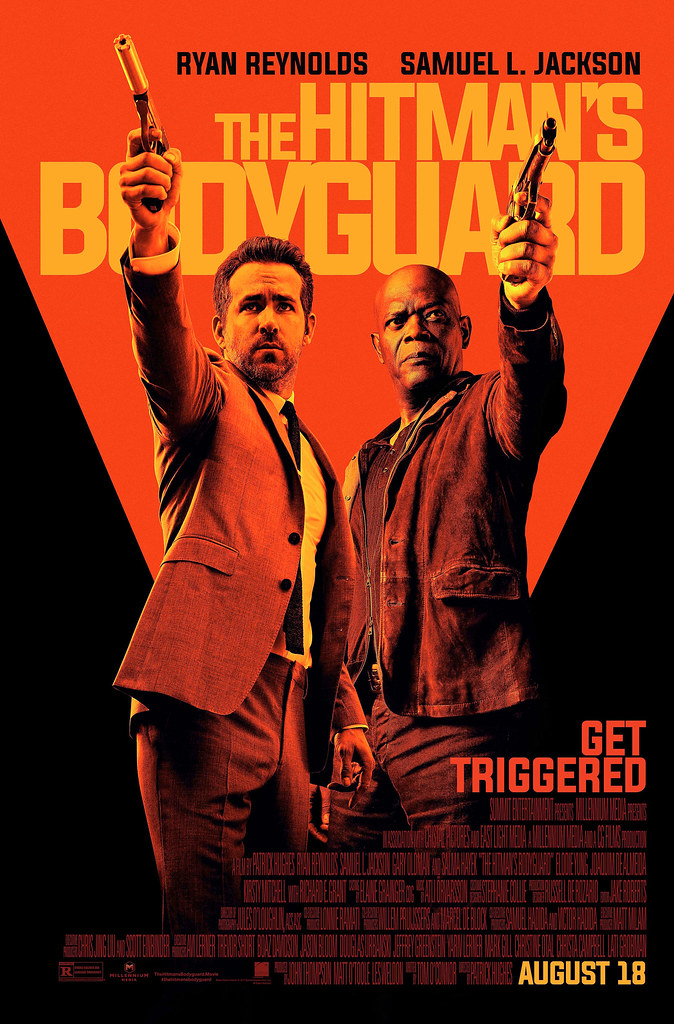 The world’s top protection agent is called upon to guard the life of his mortal enemy, one of the world’s most notorious hit men. The relentless bodyguard and manipulative assassin have been on the opposite end of the bullet for years and are thrown together for a wildly outrageous 24 hours. During their journey from England to the Hague, they encounter high-speed car chases, outlandish boat escapades and a merciless Eastern European dictator who is out for blood.

When I saw Samuel L. Jackson and Ryan Reynolds on the poster cover of The Hitman’s Bodyguard, I knew that this film would be really funny. I was expecting a lot of laughs when I watched the film. However, the comedy is not as many I was hoping for and they are not as funny as I expected. Nevertheless, I still think the story is good enough. So now, let’s get down to business and talk about the overall film.Like the title of the film, this is about a hitman and his bodyguard. The hitman played by Samuel L. Jackson

Like the title of the film, this is about a hitman and his bodyguard. The hitman named Darius Kincaid, played by Samuel L. Jackson was sent from England to Hague to give witnesses against a cruel president. If Darius gave his testimony, the government will release his wife from jail. That’s why, in order to free his wife, Darius was willing to give his testimony. On his way to Hague, he was attacked. There’s a mole inside the Interpol and therefore it’s up to Michael Bryce to protect Darius. Michael Bryce played by Ryan Reynolds is a protection bodyguard that has been hired by Amelia Roussel, an Interpol agent who apparently Michael’s ex-girlfriend as well. From then on, things got more complicated and more exciting.

As expected from Ryan Reynolds, his character funny only by talking and his facial expression. I don’t watch Ryan Reynolds’s films much. The last film played by him that I watched is actually  Deadpool (2016). However, I dare say that he’s a great actor that knows how to entertain the audience. He didn’t have to do much to be funny. Only by talking and his facial expression, he can make us laugh. In The Hitman’s Bodyguard, I can’t decide whether his character is more of a serious person or not. At first, he looked like he’s a ridiculous man, yet again he did his job really well. It’s a mixture of both and I think as always, Ryan Reynolds embodied the character really well. You can’t deny the fact that he is indeed funny.

As for Samuel L. Jackson, well, by now I have seen him doing any kind of characters from the good one like in Marvel films or the bad one like in Kong: Skull Island (2017). I am very confident to say that he can do just anything, including in The Hitman’s Bodyguard. Samuel L. Jackson played the character of Darius Kincaid. He’s not the kind of the main character that you would love but you wouldn’t hate him either. He is certainly not a good person but he is not a bad person either. As always, he added a little of sarcasm that ended as a joke that would make us laugh. It’s not as funny as I was hoping for but his sarcastic comments can make me smile a couple of times. Samuel L. Jackson portrayed his character really well, even the way he’s angry or hurt. He has done a great job.

It’s been awhile since I watched Salma Hayek on the silver screen. I hardly ever see her films so I didn’t know what to expect. Although her screen time is not as many as Ryan Reynolds and Samuel L. Jackson, whenever she’s on screen, she stole the show. With some bad swear words and attitude, Salma Hayek did embody her character really well. She may not do some dangerous stunts or fightings like Ryan Reynolds or Samuel L. Jackson, but her fighting scenes are pretty interesting to see. Cruel, yes, but also funny in some ways. I must say, Salma Hayek really played her character really good.

In terms of the story, the film is good. At some points, it’s very intense. I can’t say unpredictable but with so many actions and stunts, you can feel the tension of the story. It’s very sadistic at some points so I am not surprised if this film gets an R-rated. Plus with some bad swearing words, I am pretty sure this film won’t ever be given a rate under R. I mean, I don’t mind swearing because as much to my mother’s dismay, I did some swearing too. Though I’m trying not to use a very foul word. However, sometimes too much swearing isn’t something that I like though I understand why they used so many bad words. That’s why I won’t say too much about it. Nevertheless, I suggest if you watched this film with a younger person, it’s better to let them know that those words are not good to say. Though I do suggest that this film is not being watched by a younger person, especially children. Not just because of the bad words but because of the violence as well.

The overall story is not as funny as I was hoping for. Although some scenes and talks are funny, they weren’t funny enough to make my stomach hurt. Still, I have to give the film credits in terms of tension. The action sequences are great if not very violent. I guess we can’t expect less from a film that tells about a hitman and some sort. I think The Hitman’s Bodyguard is a good film that you will enjoy. I don’t dare to say it’s a great film but this film is good enough to entertain you.