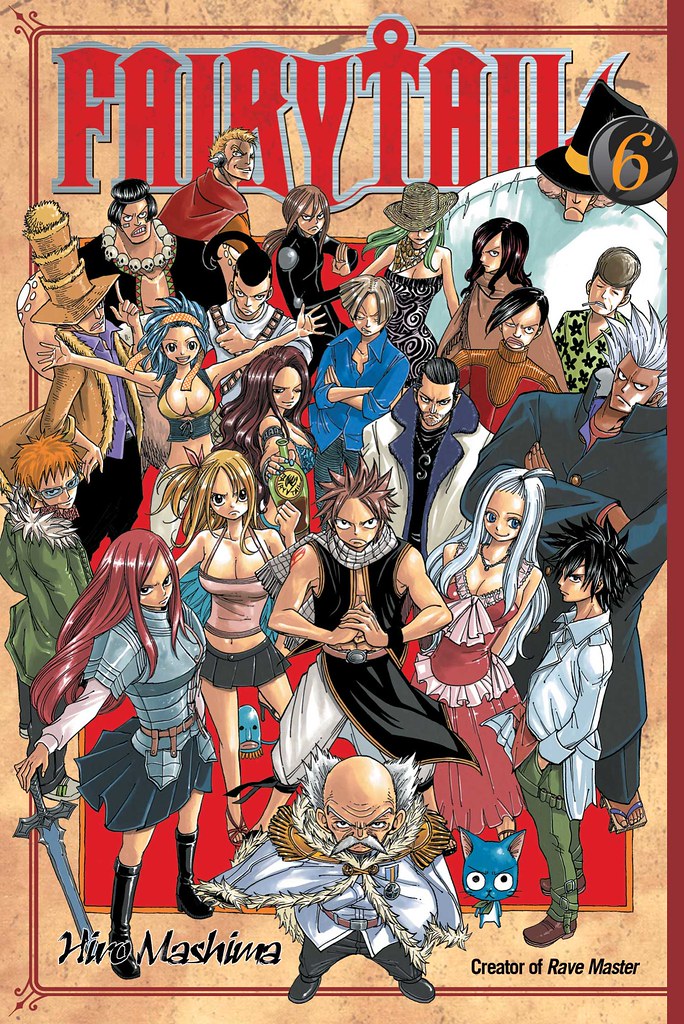 In the mystical land of Fiore, magic exists as an essential part of everyday life. Countless magic guilds lie at the core of all magical activity, and serve as venues for like-minded mages to band together and take on job requests. Among them, Fairy Tail stands out from the rest as a place of strength, spirit, and family.

Lucy Heartfilia is a young mage searching for celestial gate keys, and her dream is to become a full-fledged wizard by joining this famous guild. In her search, she runs into Natsu Dragneel and his partner Happy, who are on a quest to find Natsu’s foster father, the dragon Igneel.

Upon being tricked by a man, Lucy falls under an abduction attempt, only to be saved by Natsu. To her shock, he reveals that he is a member of Fairy Tail and invites her to join them. There, Lucy meets the guild’s strange members, such as the ice wizard Gray Fullbuster and magic swordswoman Erza Scarlet. Together as a family, they battle the forces of evil, help those in need, and gain new friends, all the while enjoying the never-ending adventure that is Fairy Tail.

After nine bloody years, I finally have to say goodbye to Fairy Tail. I often said that I wanted this manga meets its end and when finally the time has come, I do have a mixed feeling. I really want to see its finale but at the same time, I don’t want to say goodbye just yet. But well, eventually, everything has come to an end, including Fairy Tail. We can’t expect the author to keep going on because it would be really boring. Anyway, Mashima Hiro has given us a story that worth to read. It truly has been a fun nine years. I’ve laughed, smiled, and even nearly in tears during my time reading Fairy Tail. To tell you the truth, I did cry when I watch the anime version. A little bit of throwback, I’ve read Fairy Tail in my second year at high school back in the year of 2008. A couple of friends suggested me to read it along with One Piece and I did read both manga. While One Piece is still going on with its story, Fairy Tail has finally come to meet its end.

“The minute you think of giving up, think of the reason why you held on so long.” – Natsu Dragneel

Fairy Tail is a manga more for male rather than female because mostly it’s about fighting and war and the drawing itself shows much. However, as a girl myself, I do enjoy it because the story of Fairy Tail is very good and of course, can be very funny as well. Like any classic manga that I’ve read so far or at least I kind of compared it to One Piece, the enemy is getting stronger and stronger as the story went by. Of course, the characters are also getting stronger but it became more and more impossible. Pretty much is getting too predictable. However, it’s how the author told the story that made me wanted to read more. Although I know how things were going to end eventually, there are some stories unfolded that made me waiting for the next chapters. The fighting scenes and skills were shown differently, so I’m guessing that’s another reason why I wanted to see more. Even though the enemy seemed to be stronger, all the characters from Fairy Tail guild also grew stronger. They developed new skills that made me wanted to see what they’ve been hiding under their sleeves.

“Moving on doesn’t mean you forget about things. It just means you have to accept what’s happened and continue living.” – Erza Scarlet

What I like about Fairy Tail is not only because of the story but also the moral lessons given by the characters. I can’t even begin which quotations I like the most because when they spoke of their friends, comrades, and family, they really can give you goosebumps. I always like the messages they gave. Some times, their words are so touching that I have to hold my tears. So Fairy Tail is not just about fightings and war, but they also gave us good messages about friends and family. Those messages will not only give you goosebumps but can make you feel touched. I even cried when I watched the anime version in some episodes because the story and the message they gave is so good yet so sad. It’s their friendship and their bonds that made Fairy Tail guild is so special. They really did trust each other even though they fought a lot too. Like Natsu and Gray who seemed to quarrel all the time and so on. They practically a family rather than colleagues in the same guild. The relationship between the Fairy Tail member is very interesting to read. Although in the end, other characters from other guilds also showed a good bond between their guilds, it’s still unlike Fairy Tail. There’s something about Fairy Tail that makes the members so special and has strong bonds with each other. Then again, this manga is about Fairy Tail. Therefore the author would highlight the member of Fairy Tail guild more rather than focusing on other guilds.

“There are people in this world that enjoy being alone, but there isn’t a single person that can bear solitude.” – Makarov Dreyar

Of course, it all comes back to the story and the fighting scenes. Throughout the story, we would see amazing magic skill. Each of the characters has their own skills that as the reader, you would be confused which magic skills you like the most or which magic skills is the strongest. I still found it hard to choose my favourite character because, with their different skills, it’s hard to choose. Even their enemies also were given many interesting magic skills. Some even seemed too impossible to beat. However, with so many varieties of magic skills, the fighting scenes got more and more interesting as time goes by. You eventually wanted to know what they really couldn’t do because, by that time, it seemed like there’s nothing they couldn’t do. They seemed to be able to do anything. It doesn’t make the story less boring, well perhaps at one or two times, but in the end, you would want to read the story again because you wanted to know how things turned up.

But it’s not about war and fight, there is also stories about each characters’ past and even how the beginning of the Fairy Tail. Although in details, you should read Fairy Tail Zero if you want to know how really Fairy Tail guild is built. That manga also has a very interesting story as well because it tells us more about before Fairy Tail was built and how the founders met and so on. It’s really interesting. Perhaps I will review it in the future. Anyway, let’s get back to Fairy Tail first.

“Fear isn’t ‘evil’, it only allows us to learn our own weaknesses. When we learn our weakness, people can grow stronger and kinder.” – Gildarts Clive

After the story, a manga is about the drawings too. I think Fairy Tail has a very good drawing. It grows even better throughout the story, as all manga do. Well, everybody always gets better as time goes by. Although at some point, the drawings can be a bit vulgar but not so vulgar. In Japan, they said it as ecchi. I don’t really mind anyway. It’s not that I like seeing ecchi manga but it’s not like the drawing disturbs the flow the story anyway, so I don’t really mind a little bit of sexy here and there. I like how the author drew everything into details. He really drew everything carefully, including the guild stamp. I like the idea of the guild mark. So, each member of a guild will have a mark stamped in one part of his/her body. Natsu’s mark is on his upper arm, while Gray’s is on his chest. Lucy’s mark is on her back palm, while Erza’s is on her upper arm, the opposite hand from Natsu. It’s pretty much interesting how they decided to put their guild mark but it’s more interesting to know that the author really thought this much and he always made sure the mark is there throughout the story. The consistency is great. 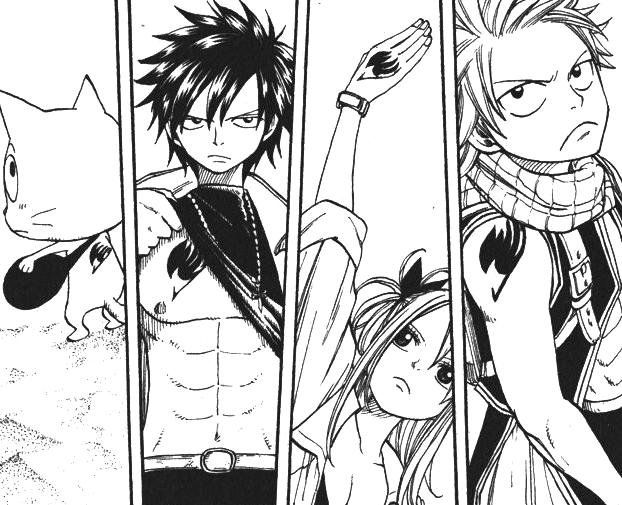 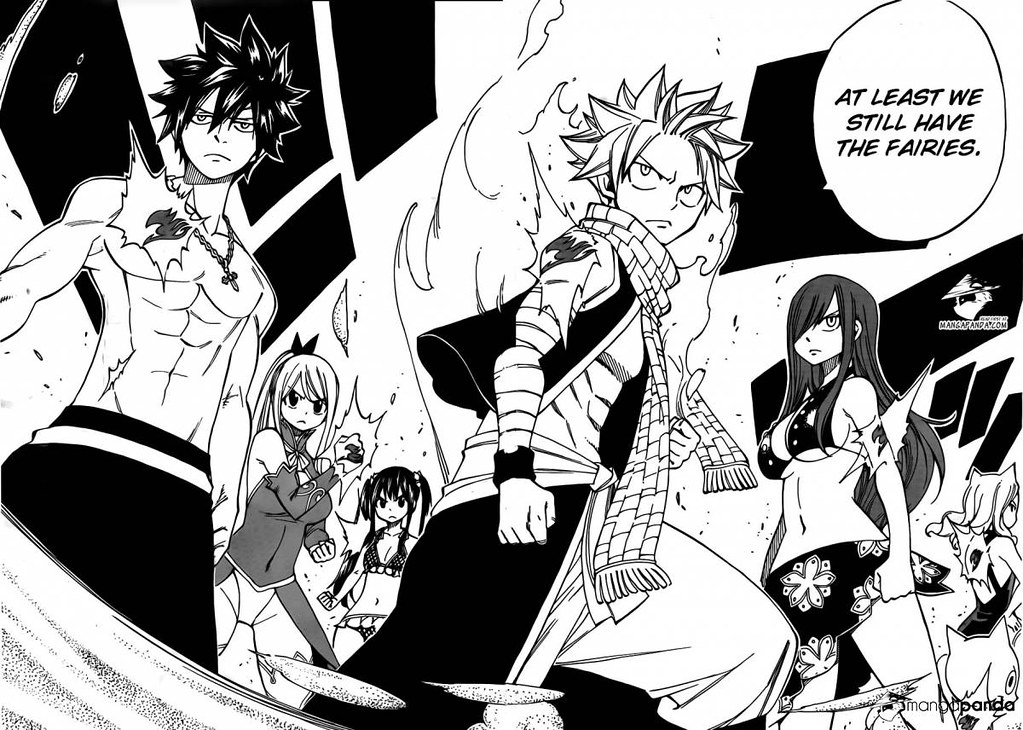 Every character is named uniquely. I really like their names, like Natsu Dragneel, Gray Fullbuster, Lucy Heartfilia, Erza Scarlet, Mirajane Strauss, Wendy Marvell, Juvia Lockser, Gajeel Redfox, Mavis Vermilion, Makarov Dreyar, Zeref, and the list goes on. I don’t know from what language the author adapted the name but they are fantastic. If anyone knows, do tell me in the comment. I would like to know. 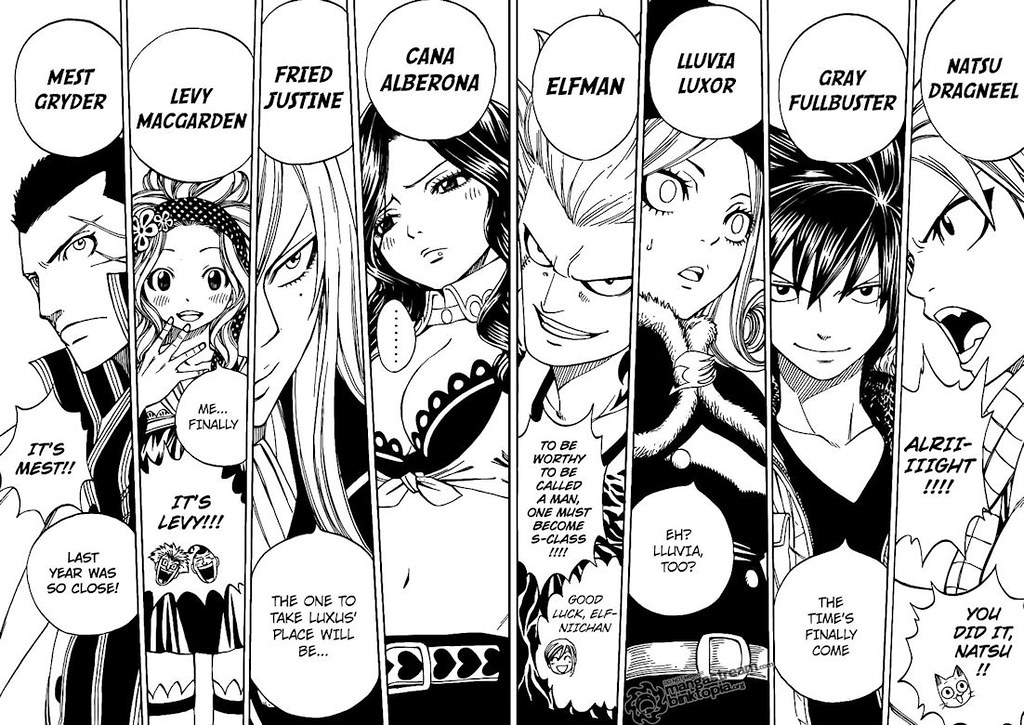 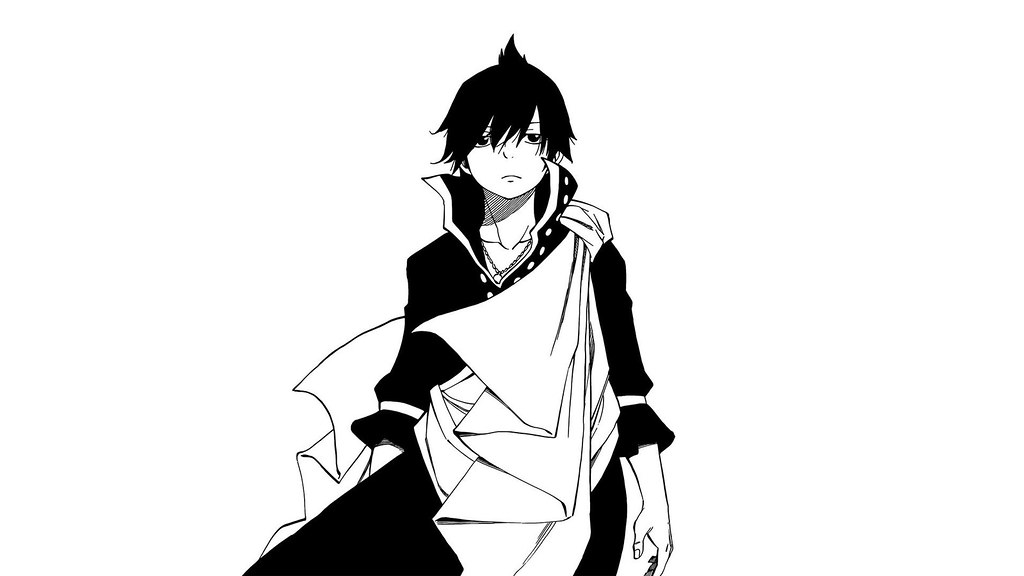 Fairy Tail is really an entertaining manga. Not only the story is good, everything else in the manga is all very good. Everything is delivered really well, making me as a reader, enjoy the story very much. The moral lesson is great and touches my heart many times. The humour is funny and can make me laugh. The fightings are good and intense. Several hints were given throughout the story. Those hints were given to give us a glimpse of how the ending story would be. However, because the story is too long, those hints were kind of forgotten, not until I saw the anime version that I remember there are some questions yet to be answered in the beginning. Those unanswered questions really got answered in the end. Surely there are times when I felt bored because I kind of can predicts the outcome of the fightings. Nonetheless, I still wanted to read it because it’s not about the fightings but it’s the story that made me curious.

“There’s no need to change the past. Because of the past we are who we are now.” – Gray Fullbuster

I don’t know if I really love and into the ending but I think it’s still good and kind of satisfying. I will miss reading Fairy Tail so much. I will miss all the characters. After reading this manga for so long, I can’t believe it’s finally come to an end. It’s the same feeling when I read Inuyasha. These manga have been in my life for so long that it’s kind of sad to say goodbye. Although, at the same time, I kind of relief that the story is ended because as I was saying many times, a too long story would make things too complicated and eventually will make the readers bored. Don’t you think? So, overall, I can say Fairy Tail is a great manga, with great stories and drawings. The author put just the right amount of humour and moral lessons in it, making Fairy Tail one of the best manga I’ve read so far. I heard that Rave, which was written by the same author before he wrote Fairy Tail, has a better story. People said that Rave is super awesome. I haven’t read it so I don’t really know, but I think I will read it soon.

In summary, I give Fairy Tail 4 out of 5 stars.