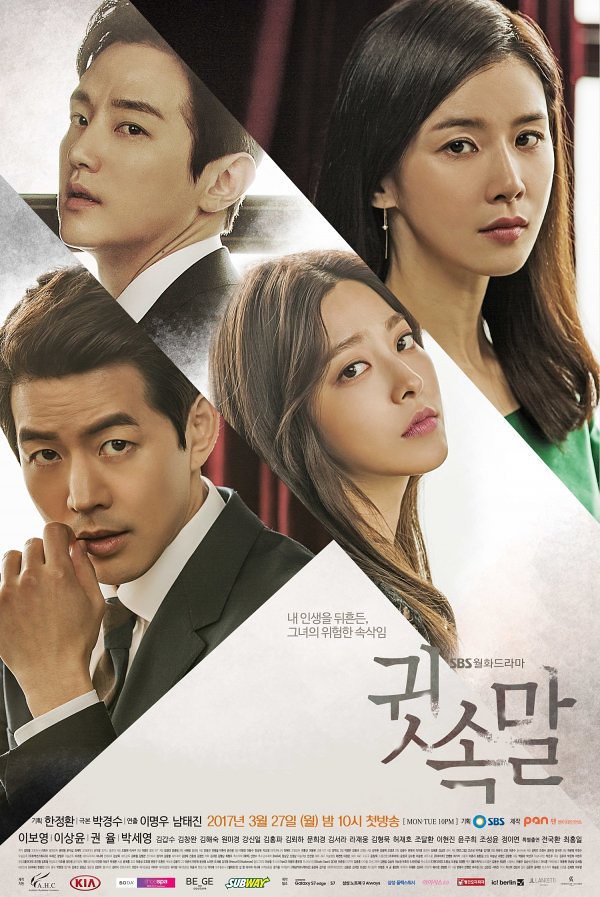 Shin Young-Joo (Lee Bo-Young) is a charismatic female section chief police officer who is passionate in her career. With her family facing financial difficulties, she has to undergo the agony and pay debts for her family. She speaks harsh but has a heart of gold.

Lee Dong-Joon (Lee Sang-Yoon) is a virtuous elite judge, brilliant-minded and warm-hearted, and has a willingness for weak people who need a listening ear.

Both of them join alliances together to uncover defence industry corruption at Taebaek, the nation’s biggest law firm, which turns out to be one of the top scandals ever.

I found out about Whisper by accident. I was looking for another Korean drama but then I came across this one. I read the synopsis and kind of interested in it, plus I have seen Lee Sang-Yoon in Angel Eyes (2014) and Lee Bo-Young in I Can Hear Your Voice (2013) so that’s why I tried to give it a go. Do I feel disappointed after watching it? I don’t think so. This Korean drama is good. The plot story is very good but a bit complicated. I found myself kind of confused with the whole problem at first but as the series goes by, I became more and more understanding with the plot. Do I like this drama? Kind of, I think. I do like the plot story but by this time, I kind of want to watch Korean drama with some romance. After Defendant (2017), I think I have enough about Korean drama with no love story in it. At least for now. I am questioning the romance genre here because there is romance in the story but it goes to minimum. At least it’s better than Defendant but still less than Remember: War of the Son (2015-2016). To be honest, it’s not like I love all romance films. I like it if there’s another element besides romance and drama, like crime or political or action or any sort. However, sometimes, too much crime or political is not good. Well, I am not saying that the story is bad, it’s just I need a break from all those tensions and a little bit of romance or comedy is always a good idea.

“A judge shouldn’t live life easily. I get clothes and money from the country to punish those who attempt to live an easy life.” – Lee Dong-Joon

Anyway, let’s talk about the actors and the actresses first. I am stunned with Lee Bo-Young’s skill of doing fighting scenes. Although it’s not something extravagant or dangerous, I always like when the main female characters can do some fights. In Whisper, she has proven us that she can do anything. Either crying, fighting, or just the usual normal scenes, Lee Bo-Young nailed it all. I can say the same with Lee Sang-Yoon. Although I don’t like the character of Lee Dong-Joon in this Korean drama, I have to praise Lee Sang-Yoon’s performance.

I like the chemistry between Lee Bo-Young and Lee Sang-Yoon here. However, let me remind you, the romance part is very limited. I was hoping there would be some romance scenes going on between them since they spent a lot of time together, but no, there isn’t much. I don’t even get it when was the exact time they fall in love, though in the end, I can see that they care for each other.

I have never watched Park Se-Young’s dramas before but in Whisper, she really embodied her character really well. What’s more interesting about her character is that you can’t exactly predict whether she’s good or bad or bad but act good or good but act bad. Either way, I think Park Se-Young acting skill is really good. Her chemistry with Kwon Yul is perhaps more intriguing than Lee Bo-Young and Lee Sang-Yoon. It was because of her character, Choi Soo-Yeon, and Kwon Yul’s character, Kang Jung-Il, have more complicated stories going on. Choi Soo-Yeon and Kang Jung-Il definitely have more complex love story than Shin Young-Joo and Lee Dong-Joon. That’s why it’s more interesting to see them. However, I am not saying that Shin Young-Joo and Lee Dong-Joon don’t deserve the attention because of course, they are the two main characters after all. But with their romance scenes are too minimum, I can’t help it but prefer the conflict between Choi Soo-Yeon and Kang Jung-Il.

I’ve seen Kwon Yul in Let’s Fight Ghost (2016) before and he was good at playing the antagonist. This time, it’s not an exception either. He is still good in playing the bad guy. Tell you what. His facial expression as the bad guy is flawless and will make you if not hate then annoyed. Seriously. As I said many times before, if you are annoyed with the character or even hate him/her, that’s a sign that the actor or actress is doing their job perfectly. It means they really steeped in their characters.

The storyline of Whisper is mainly about politics and crime, but mainly politics. Despite my history back in the university where I joined an organisation, I actually don’t really like politics. There are times that politics can be really interesting but most of the time, politics only brought misery to most people. I know it’s not always like that but from what I’ve seen, that’s most likely to happen. Anyway, the overall story is very good. At first, I thought it would be like the typical Korean drama of framing innocent people and such but no, it’s more than that and more complicated. You can’t really decide which character is the worst character because when you thought this one character is the worst of all, another character stepped in and did the worser thing. And when we thought this character is the worst, he/she did something that managed to make us feel sympathetic towards them. I am not saying this Korean drama stirred up your emotion but it does make you confused a little bit. And because I don’t really understand Korean’s politics, if I didn’t pay attention to the story, I wouldn’t understand what’s going on in the drama. But not to worry, because you can still enjoy the story.

If you’re not into romance, this Korean drama would be a good choice for you. However, if you want to see a romance drama, this is not the right drama for you because the romance story is really minimum. Whisper has a complicated storyline but I think it still is entertaining. There are some things that confused me but I still found myself able to enjoy this Korean drama. With all the cast doing their job really good and the setting places were designed thoughtfully, Whisper managed to deliver a good drama. I think what we can learn from this drama that as a person don’t be greedy and don’t ever corrupt for own interest. It won’t do any justice and you’ll end up in disadvantage. I know most films and dramas told us about this but in Whisper, they really said it loud and clear. As for the ending, I don’t know if I like it or not. I like how things turned out to the protagonists, meaning Lee Dong-Joon and Shin Young-Joo. But the antagonists’ fate is a bit abstract. I don’t want to give too much but I think it’s the ending that I have expected. I do, though, understand why they made the ending that way. Well, kind of.

In summary, I can’t say I love Whisper but this drama is pretty entertaining. It’s worth to watch when you don’t have anything else to watch. The story is a bit complicated in a good way, it can be boring at some points though perhaps it’s just me. All the cast have done great jobs in portraying their characters and so does the production team who managed to execute the story, the set, the costume, and everything else really good. There were some flaws in this drama but I can still enjoy it most of the time.