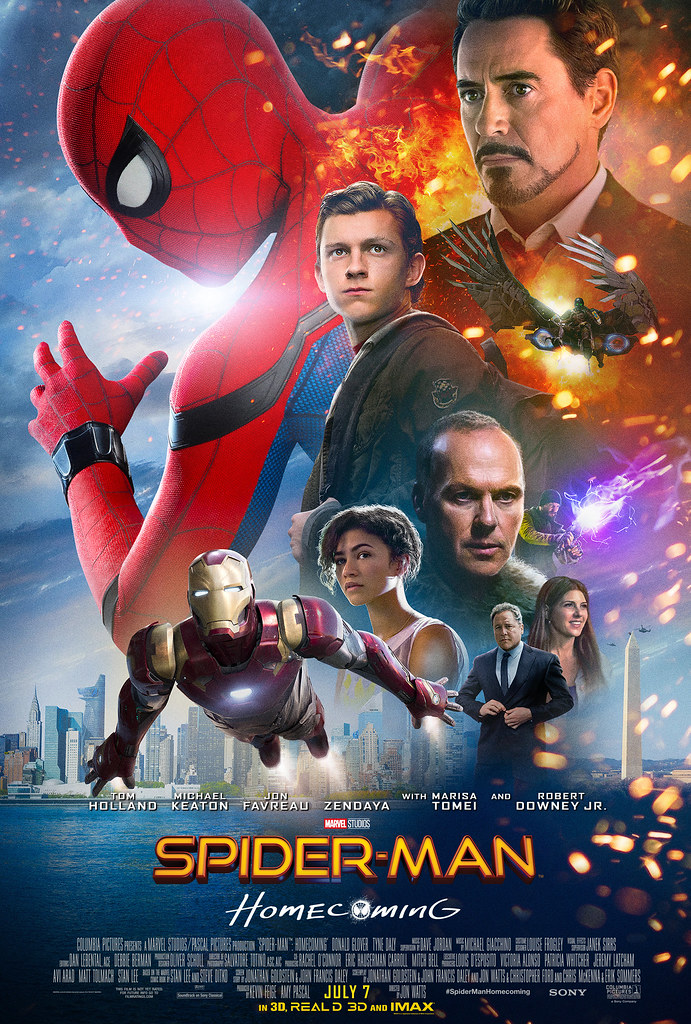 Thrilled by his experience with the Avengers, young Peter Parker returns home to live with his Aunt May. Under the watchful eye of mentor Tony Stark, Parker starts to embrace his newfound identity as Spider-Man. He also tries to return to his normal daily routine—distracted by thoughts of proving himself to be more than just a friendly neighbourhood superhero. Peter must soon put his powers to the test when the evil Vulture emerges to threaten everything that he holds dear.

Although I love the old superheroes, I think it’s time for those superheroes to put down their white hats and give the youngs to do the job. With Tom Holland in Spider-Man: Homecoming looks so young yet so incredible, I think we can rest assure that new era for younger superheroes will be just as awesome as the old ones. Surely, I am going to miss Robert Downey Jr. whenever he decided to hang up his cap—or mask. But with his age getting old, I think it’s not surprising if he decided to quit while his name as Iron Man still forever be adored by millions, or perhaps billions, of people. Even Hugh Jackman has decided to quit his role as Wolverine after seventeen years playing it and Logan (2017) is indeed his last film as the iconic Wolverine from X-Men films.

Thankfully, Robert Downey Jr. hasn’t really stated that he will quit now. At least by the time I wrote this review, it hasn’t happened. So we can still rest assured that we will still see Robert Downey Jr. as the most memorable and iconic superhero in near future. We can’t deny the fact that Iron Man is Marvel Universe franchise’s central player. Thanks to him, Marvel Universe franchise’s name rises. I think we can agree on that. Anyway, enough about him. Let’s talk about the main character first, which of course, Spider-Man.

Unlike any other Spider-Man films that you’ve ever watched before, Spider-Man: Homecoming gives you something new. Not just the costume, but also the technology, the cast, and especially the story. After all these years, Spider-Man has finally come back to Marvel Universe. I guess it’s about time anyway. After Tom Holland’s performance in Captain America: Civil War (2016), pretty much everyone is waiting for his solo film. Even though he only got a very small portion of screen time in that film, Tom Holland did a great job in portraying Spider-Man. And now, in this film, has really entertained us all and has given us a very entertaining performance.

Tom Holland is really perfect for the role of Spider-Man. Not only he can act but also he can do some stunts. I’ve seen his video of doing some gymnastic acts like back handspring, somersault, and so on. It’s awesome. Like really awesome. Of all the Spider-Man that has ever existed, meaning Tobey Maguire and Andrew Garfield, Tom Holland is by far the youngest actor who reprises the role, yet the best one who plays it. Younger age doesn’t mean he is less good because no, he is actually better, in my opinion. Don’t get me wrong. I like Andrew Garfield a lot. To me, he was very good in portraying Spider-Man even better than Tobey Maguire. However, I think the role of Spider-Man is made for Tom Holland. I don’t know about the comic but from what I’ve heard, Spider-Man a.k.a. Peter Parker is supposed to be a high school student and therefore he should be like a proper high schooler who has problems like homework, crush in school, and such. Although the other actors had played a high school Peter Parker, but somehow, Tom Holland is the most fitting one. He really has the look of playing a high school student. Eventually, Spider-Man: Homecoming is all about Peter Parker who grew up from a naive high schooler to someone who has been given powers and responsibility as Spider-Man. Not only Tom Holland managed to make us laugh, but we can also see and feel his trouble, either his sadness or his confusion and desperation.

Robert Downey Jr. is also back to reprise the role of Tony Stark/Iron Man. After his performance in Captain America: Civil War, I am so happy to see him again in Spider-Man: Homecoming. As the central player himself, it’s very good to see Tony Stark visiting other Marvel Universe’s films as well. The overall Iron Man solo films are successful indeed. Even though the second film is kind of boring, but they redeemed it with Iron Man 3 (2013), which in my opinion the best Iron Man film. Despite the successful history, adding another Iron Man’s solo films would be unwise. So, I really like the idea of Tony Stark/Iron Man visiting another Marvel’s films. Robert Downey Jr. as the multi-billionaire is still as perfect as he can be. I think no one can ever beat him in playing that role. He’s just perfect. I like the idea of Tony Stark getting a bit wiser here but still sarcastic like before. At least we can see a new side of him, a father side of him. Yes, he’s like a father figure to Peter Parker even though Peter himself didn’t think so. After all these years, the effect of seeing Iron Man hasn’t worn off even a bit. I am still amazed and in love with that superhero.The story of Spider-Man: Homecoming is different from the previous Spider-Man films yet I think this is the best Spider-Man film so far.

The story of Spider-Man: Homecoming is different from the previous Spider-Man films yet I think this is the best Spider-Man film so far. It’s kind of boring to see another villain with some kind of biological problem again and again. As a biotechnology graduate student, it is interesting to see some sort of DNA-crossing and such in superheroes films. However, I think twice is enough to see villains with biological problems. If they kept on doing it, the film would become super boring and very predictable. I know that Spider-Man’s enemies are all those who have biological problems, just like him. At least that’s what I’ve heard in the comic. However, I am fine this new story in Spider-Man: Homecoming. It would be very boring if they only did a reboot or remake with the same kind of story like the previous Spider-Man films. That’s why I am so happy with Spider-Man: Homecoming using a new story. I don’t know if it’s in the comic or not but I like the idea where Tony Stark helped him a lot, especially with the costume. Though I prefer if Peter Parker can produce his own spider web like in the first Spider-Man trilogy films, using a high-tech tool isn’t a crime either. The new Spider-Man costume is actually very cool. I won’t give you much about it but seriously, it is awesome.

Aside from the younger looking Spider-Man, Peter Parker’s aunt, May Parker, has also become younger. Again, in my opinion, the choice of the actress who played Aunt May is so right. Since Aunt May is still an aunt and looking too old doesn’t really fit in. That’s why I like the idea that they cast a younger actress here. I think Marisa Tomei really embodied the role of Aunt May really well. Chris Evans also made a show in this film as well. His part is not much. Actually, it’s a very very small part. Still, it’s funny and somewhat invited laughter.

I don’t really see Michael Keaton’s films before but from what I’ve read, he often plays the villain. In Spider-Man: Homecoming, Michael Keaton also played the role of the villain. A very interesting one, I must say. His character, Adrian Toomes a.k.a. Vulture, felt like the world is not fair to him that’s why he did what he did, by convincing himself that what he did is good and there’s nothing wrong about it. That what he did is because of his family. The conflict is truly exciting. Plus, Michael Keaton’s performance as Vulture is really good. Unlike the other Spider-Man films, in this film, there is barely any romance given. Although there are some scenes that showed Peter Parker is interested in a girl, I wouldn’t say that as romance either. It’s a normal high school student that has a crush on a girl in his school. I am pretty sure there are many debates on the new MJ. Not that Zendaya is ugly or some sort, but she doesn’t have anything in common with Mary Jane from Spider-Man. First, her hair is black where MJ’s hair is infamously red. From there, you can take the rest. Anyway, from what I’ve read, the filmmaker is still testing the water, meaning, they wanted to see the audience’s responds with this new ‘MJ’. But of course, even if the public agrees, Zendaya isn’t going to be Mary Jane. Anyway, Zendaya’s character doesn’t get many screen time, at least not as much as the other girl, but she still did great in doing her job. Her character is quite interesting and I can’t wait to see more of her in the next Spider-Man films.

The action sequences and scenes in Spider-Man: Homecoming are very well directed. With the addition of some jokes and new technologies, everything gets more interesting and fun. The CGI effect in the film is very well edited as well, especially that involved new technologies. I really like the new Spider-Man costume here. Not only because the design is better, but the technology added in it is also better. Overall, Spider-Man: Homecoming is really the best Spider-Man film so far. Even though Spider-Man 2 (2004) is arguably said being the best Spider-Man film, but in my opinion, this is the best of all. Tom Holland really nailed every scene. With his personal skill of doing gymnastic, I am not surprised if they said he did most of his stunts himself. The other cast are also looking fantastic. Spider-Man: Homecoming really can entertain you. In spite of a different story from other Spider-Man films because of the story, this film is very entertaining and definitely not disappointing. It’s actually very fun and funny. As always, Tony Stark will make you laugh with his sarcastic comments. From Captain America: Civil War, I know that Tom Holland’s Peter Parker can make me laugh as well. It’s proved in the film that he really did make me laugh several times. All in all, Spider-Man: Homecoming has truly done great justice to the character. I can’t wait to see another performance of Spider-Man in the future.

All in all, Spider-Man: Homecoming has truly done great justice to the character. I can’t wait to see another performance of Spider-Man in the future. Don’t forget to stay until the end of the credit because you’ll see two post credit scenes. But let me remind you, the last post credit scene will make you a bit pissed off. Nonetheless, you can’t help to smile as well. This film is definitely worth to watch. Seriously. Great job to Tom Holland. He really has exceeded my expectations. As for Robert Downey Jr., well, he doesn’t disappoint me at all. He is just great and superb. Well done everyone!