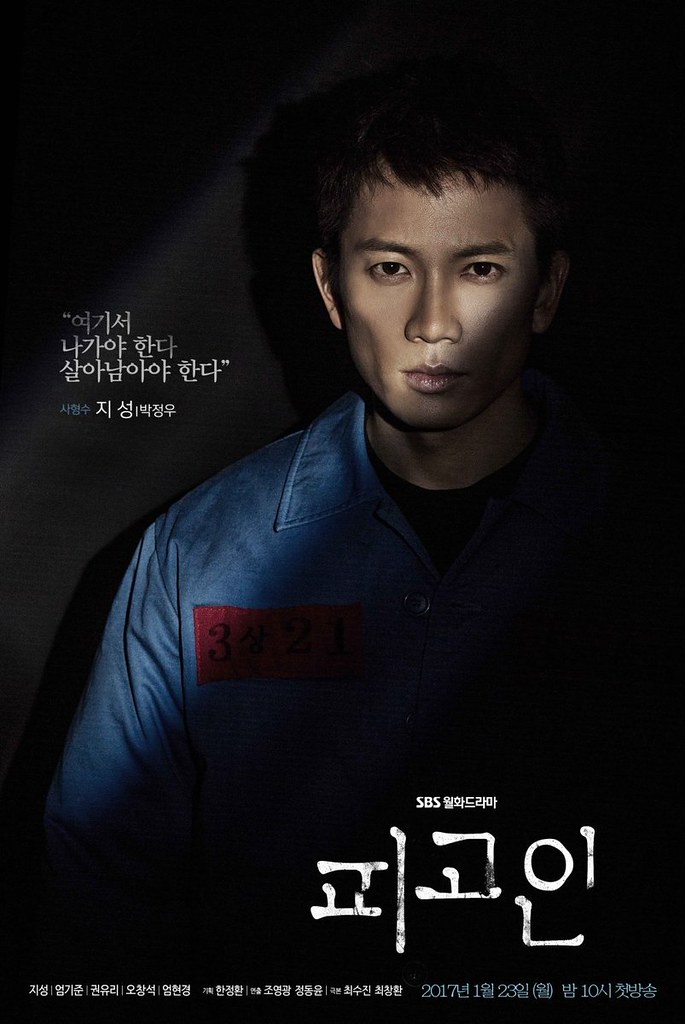 Park Jung-Woo (Ji Sung) is a prosecutor at Seoul Central District Prosecutors’ Office. One day, he wakes up and finds himself a convict on death row. Suffering from temporary amnesia, Jung-woo has no idea what transpired to land him in prison. He struggles to recover his memory and clear his name.

Like usual, I’ve watched Defendant from my sister’s reference. She said the drama is good and the rating is high. She hasn’t watched it and asked me to watch it first. I did and I have to say that this drama is not disappointing. However, like Remember: War of the Son (2015-2016), Defendant is all about crime and law. If you’re a romance seeker, this Korean drama is not the one for you. Even when I said there is barely any romance story in Remember: War of the Son, that drama still at least has romance story a bit. However, you won’t even find any romance story in Defendant aside for the fact that the main character has a wife. That too doesn’t really give any romance either. So if you’re looking for romance drama, this is not the one. But if you’re looking for a good story, Defendant will be the right choice. This Korean drama has received high ratings and those ratings are not kidding because this drama is that good. I wasn’t expecting much but I managed to finish this drama in just two days because the story is really making me curious.

In terms of the story, Defendant has a very good one. I don’t watch the American TV series of Prison Break, but I think you can say Defendant is the Korean’s Prison Break. The main character is also the convicted felon who is wrongly accused of murder. With him having temporary amnesia and all the evidence leading to him as the murderer, Park Jung-Woo must escape the prison to prove his innocence. It’s not always about how Park Jung-Woo tries to prison break. The first episodes were about Park Jung-Woo who lost his memory and those episodes made us wonder what happened at the night of the murder happened. Who was the actual murderer? The story truly will make you more and more curious as the episodes go by. During the prison break time, the tension has increased. As an audience,

During the prison break time, the tension has increased. As an audience, I can really feel the tension. I was afraid whether Park Jung-Woo managed to escape or not. Whether he would get caught or not. Of course, afterwards, he still has to find the real murderer and proved his innocence in order to be really free and no longer a convicted felon. I’ve never seen Ji Sung’s dramas before but according to my sister, he is very popular because his acting is so good. I have to agree with that because Ji Sung surely delivered a great performance in Defendant.

“It’s human instinct to deny and avoid the truth rather than accepting reality. One tries to endure this reality that may seem so hard to believe. But when a person reaches a certain limit, they runaway to protect him or herself. They do this by erasing their memory.” – Kim Sun Hwa

I’ve never seen Ji Sung’s dramas before but according to my sister, he is very popular because his acting is so good. I have to agree with that because Ji Sung surely delivered a great performance in Defendant. From a prestigious prosecutor to convicted felon, Ji Sung’s performance as Park Jung-Woo is flawless. You can feel his frustration, his anger, his sadness, and other emotions that he has shown throughout the series. I am so impressed with his performance as an inmate with a death sentence. I kind of feel very sorry for him and sad. It’s so heartbreaking to see. That’s a proof that Ji Sung is a great actor because he can gain sympathy from the audience.

Besides Ji Sung, I am also impressed by Um Ki-Joon who played twins brother. The way he changed his character from Cha Sun-Ho to Cha Min-Ho who basically have different characters, is just amazing. I think it’s not easy to play two characters at once but Um Ki-Joon definitely did it well. The family dynamics in Cha Sun-Ho’s and Cha Min-Ho’s family were slowly revealed, thus making the story got more and more interesting. As for Oh Chang-Seok who played the character of Kang Jun-Hyuk, even though I don’t really understand and like his character, but Oh Chang-Seok managed to deliver a good performance. His uncertainty made me wonder so many times who’s side was he on actually.

However, the most impressing one must be Shin Rin-Ah. She played the character of Park Ha-Yeon, who is Park Jung-Woo’s daughter. At such young age, she managed to play her role really really well. Seriously. The way she cried in Defendant is really great that you can actually feel her emotion. Her acting is also perfect. She managed to keep up with all the other adults. I think she really stole the show somehow. At least she really manages to capture my heart.

Kwon Yu-Ri who played the character of Seo Eun-Hye, wasn’t given the chance to sunshine herself. Although she gave a good performance, I still think she didn’t really capture the audience’s eyes. She is more of a sidekick character rather than one of the main characters. I even think other characters who weren’t main characters, got more attention than her. Don’t get me wrong. Kwon Yu-Ri was good in this Korean drama but her character made her not as outstanding as Shin Rin-Ah who basically only a supporting cast. Seo Eun-Hye’s background was only told half way and that’s what made me think, if they told it half way, I think they shouldn’t even tell about it in the beginning because in the end, all stories about her causing more questions that got no answers.

I’ve seen Uhm Hyun-Kyung in Good Doctor (2013). She was just a supporting cast back then. Even she didn’t show up that many times. However, in Defendant, she played one of the main characters as Na Yeon-Hee, Cha Sun-Ho’s wife. Like Kwon Yu-Ri, her performance was not actually lacking anything. It was actually very good and very different from her character in Good Doctor. She looks more mature now since she played a wife character this time. However, somehow her character in the series was not outstanding enough. The background story of Na Yeon-Hee wasn’t told much, therefore, many questions left unanswered. I think if they told us a bit more, her story would be more interesting. However, with all the attention and stories went to Park Jung-Woo, I also think if they added more of Na Yeon-Hee’s story, Defendant would be too complicated and too complex because so many stuff needed to be told. So kind of in fifty-fifty mode here. Regardless, I still think Uhm Hyun-Kyung has delivered a good performance as well.

This is the third time I saw Kim Min-Seok, after Descendants of the Sun (2016) and Doctors (2016). His acting is already good then, and now he still gave great performances as Park Jung-Woo’s cellmate named Lee Sung-Gyu. I am looking forward to seeing his other performances in the future. I also like the relationship built between Park Jung-Woo’s other cellmates as well. They managed to give some colour in Park Jung-Woo’s days in prison. More than once they managed to make me laugh. It’s a good seeing that throughout the series, the story is pretty tensed. Therefore some laugh is agreeable.The setting in this drama looks perfect. The prisons, the houses, the court. Everything was put in place perfectly.

The setting in this drama looks perfect. The prisons, the houses, the court. Everything was put in place perfectly. Even the characters’ clothes were put flawlessly. They really paid attention to every detail and so making the story pretty much looks real. The ending of Defendant is not perfect but it’s definitely better than some other Korean dramas that I have watched. At least everything that I need to know is solved. So I can finish this drama with a happy feeling.

All in all, Defendant is a very good TV series. You can definitely enjoy it very much because there are so many tensions and as the series goes by, the stories will make you more and more curious. If you’re looking for some romance in this Korean drama, you won’t get any. There is no romance in the stories. It’s purely about crime and prosecutors and such. On the other hand, even though you won’t get any romance story, you will be given a very enjoyable and tensed story. Defendant is not a drama for romance seeker but nonetheless, you would still enjoy it.