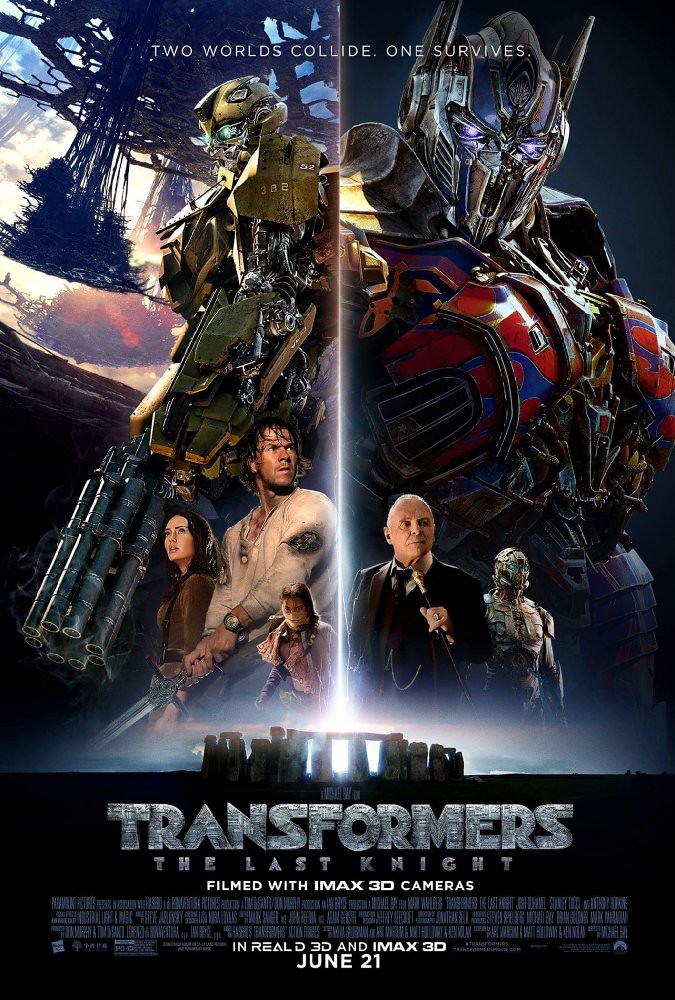 Humans are at war with the Transformers, and Optimus Prime is gone. The key to saving the future lies buried in the secrets of the past and the hidden history of Transformers on Earth. Now, it’s up to the unlikely alliance of Cade Yeager (Mark Wahlberg), Bumblebee, an English Lord (Anthony Hopkins) and an Oxford professor (Laura Haddock) to save the world.

Transformers: The Last Knight is another Summer film that I’ve been waiting for, after Wonder Woman (2017) and The Mummy (2017). Transformers has always been one of my favourite films of all time, despite not having many good reviews. Honestly, when the first film was released, I am not so excited about it. I thought Transformers would be some kind of a film about robots and it would be like Power Rangers or something. But I was completely wrong. Transformers is more awesome and cooler. The idea of the Autobots changing into cars and machines, it was just awesome.

Anyway, I am not so excited about the last Transformers film, which is Transformers: Age of Extinction (2014) because Shia LaBeouf didn’t take part in the franchise anymore. Not that I like LaBeouf but I like the bond between his character with my favourite Autobot, Bumblebee. Yep, it’s not Optimus Prime but Bumblebee. Bumblebee is way cooler and funnier than Optimus Prime. Seriously. Optimus Prime is too stiff, that’s why I love Bumblebee who is more chill and funnier and is a better combo with LaBeouf’s character. So I was a bit sad when the main character was replaced with Mark Wahlberg. Anyway, still, Bumblebee was the one who I wanted to see actually, and it still is. I was excited to see Transformers: The Last Knight because I want to see Bumblebee and Laura Haddock and of course, how the story goes on. So, enough for the introduction and let’s get started to my opinion for this film.

“One hundred billion trillion planets in the cosmos. You want to know, don’t you, why they keep coming here?” – Sir Edmund Burton

The Last Knight is basically the continuation of Age of Extinction where Optimus Prime has gone to find his maker. With so much going on in this film, everything seems to move so fast in the film. One scene after another kept coming without pause before we can really digest everything. Suddenly someone’s is here or there, and another person suddenly showed up without any explanations where they came from and so on. So many things are going on and thus at some points, making everything confusing. I think I should watch it twice to understand everything. I think there are so much going on in the film, so many stories to tell, yet the filmmakers only have limited time to tell them to us, thus, they tried to make everything very quick. Which at this point, not delivered really good. I do prefer the first four films but I still think that you can enjoy Transformers: The Last Knight.

What makes this film is exciting is perhaps the fact that they put a mythical Medieval story in it. King Arthur’s legend, which is one of my favourite legend stories. Why did I say the legend of King Arthur make this film is more exciting? Well, because King Arthur and robots, they seemed to not go well together and can’t possibly able to be together. Somehow, during that Age, it’s hard to imagine there would be robots especially as high technology as the Autobots. However, the scriptwriters can always find their way to make things connected even though they are not connected at all. So let’s praise those scriptwriters. They really made the impossible possible. Though, perhaps they should reconsider of making too much story. I think there are some characters that in my opinion is unimportant. I understand why those characters were created but it’s a bit unimportant. As a result, the story got longer and everything happened really fast.

Mark Wahlberg did a good job like the last Transformers film with all of his action and so on. He can be funny with his sarcastic comments and making the audience laugh a little. Still, I prefer the chemistry between Shia LaBeouf’s character with Bumblebee. Although Wahlberg’s character, Cade Yeager has developed a good friendship with Bumblebee, somehow Shia LaBeouf’s character, Sam Witwicky, looks more of a close friend of the same age with Bumblebee even though Bumblebee is way older. Bumblebee, of course, still as funny as ever and as cool as ever. I always think Bumblebee is way cooler than Optimus Prime. I don’t care if Optimus is a Prime and the leader but Bumblebee as his second-in-command and his oldest friend is way cooler and likeable. Somehow, I found Optimus Prime too poetic, too exaggerating, and always too late for everything. Optimus Prime’s line of saying he is Optimus Prime is getting cheesier by now. It’s like he couldn’t find a better line than “I am Optimus Prime”. Yes, we heard you, Optimus. Zip it already. 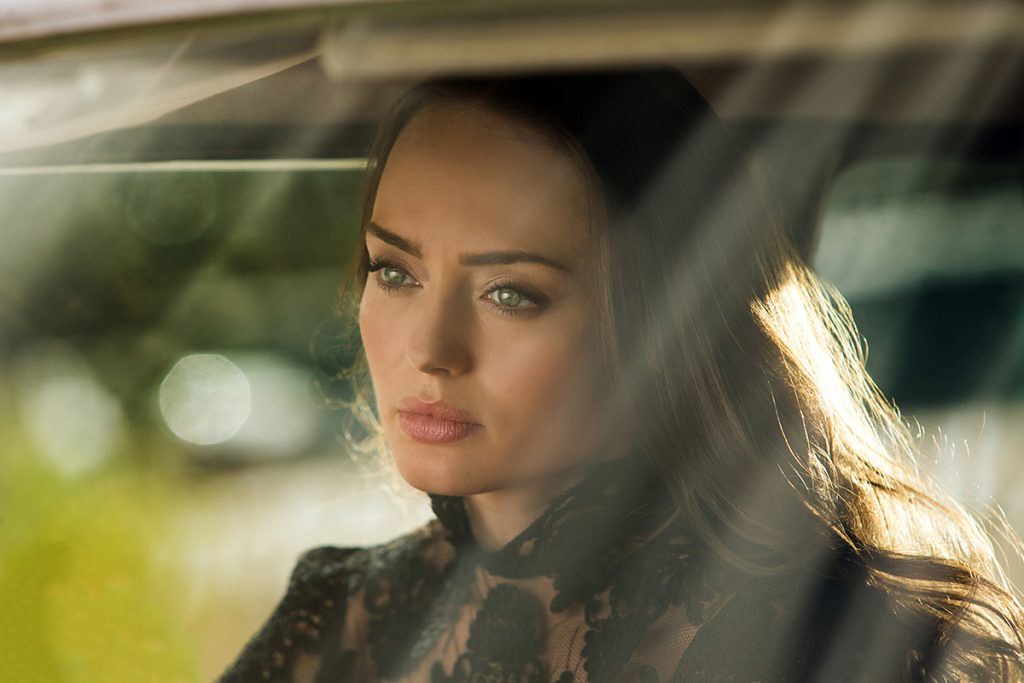 Laura Haddock has joined the cast as the female lead and I am super excited about it. More excited than seeing Mark Wahlberg, to be honest. I’ve known Haddock from Da Vinci’s Demons (2013-2015). She also showed up for awhile in Guardians of the Galaxy (2014) and Guardians of the Galaxy Vol. 2 (2017). I think her acting skill is worth to notice and praise. As proof, she did a great job in Transformers: The Last Knight. With all the actions and stunts, she was able to keep up with Wahlberg, who of course, has done hundreds of actions and stunts. So yeah, Laura Haddock is not just a pretty face, but she can do actions and stunts. Laura Haddock has done a great job indeed.

I think Josh Duhamel is perhaps the only actor from the first film that still took part in Transformers: The Last Knight. Well, his superior also has been from the first film but I forgot his name. Sorry about that. However, Josh Duhamel took more of a major part than his superior, so please do spare me. Somehow Duhamel’s character as Colonel William Lennox has lost his charm. Not because of the actor, but I think because of the script. I used to like Lennox’s character but now, I really don’t understand him or which side he was on. It’s not Decepticon’s side, I assure you.

What’s more surprising is Anthony Hopkins has also joined the cast. I mean, as one of a legend actors, one must feel honoured to have him in a big franchise as Transformers. Surely Transformers is huge, but Anthony Hopkins way more huge. Not literally of course, but Anthony Hopkins is practically a legend. As for his acting skill, you should not doubt it because he has delivered a great performance. Like Cade Yeager, Anthony Hopkins’s character, Sir Edmund Burton, can be funny as well. Though not too funny, at least he can make us smile too. Perhaps not as sarcastic as Cade Yeager, but still Sir Edmund Burton can invite us to smile a big smile.

I like how the filmmakers can make us felt sympathy towards the Autobots. It’s like they are living things, though in the film they literally are living things. made us love the Autobots. I do miss the original Autobots, like Ironhide or Ratchet. However, since my favourite Autobot is Bumblebee, I am already happy and satisfied to see him again. I wish I could see him way way more often than it already is. With his puppy-dog eyes, Bumblebee is just the combination of cute, cool, and awesome. Not to forget funny too. He’s like a child but not really child because his fighting skill is great. We were given a little background of what Bumblebee used to do before and it was shocking and awesome at the same time. I like the idea of his voice using radio, instead of his own voice like other Autobots, making him even funnier than it already is. It’s also awesome to hear his real voice when the time is needed, though it rarely happens.

As much as I miss the original Autobots like Ironhide, I like the fact they added new Autobots like Cogman. He’s not just an Autobot but also like a butler. A funny sociopath Autobot. Aside from Bumblebee, Cogman has also made us laugh several times in the film. He is unlike any Autobots that we have seen before. To tell you the truth, he looks like C-3PO in Star Wars and I’m glad I am not the only one who shared this opinion because apparently, one character in the film also think the same. With his weird attitude, Cogman surely brought us some laugh. He is a butler yet very skilful indeed. He can actually fight even though his body is not as huge as normal Autobots. Both Cogman and Bumblebee have made the mood of the film lighter and not all the time tensed. And there is also Hot Rod, the Autobot who spoke with a French accent. It’s bloody funny. The new small Autobot, Sqweeks, is also looked so cute. As much as I miss the original Autobots, the new Autobots are indeed very funny as well. 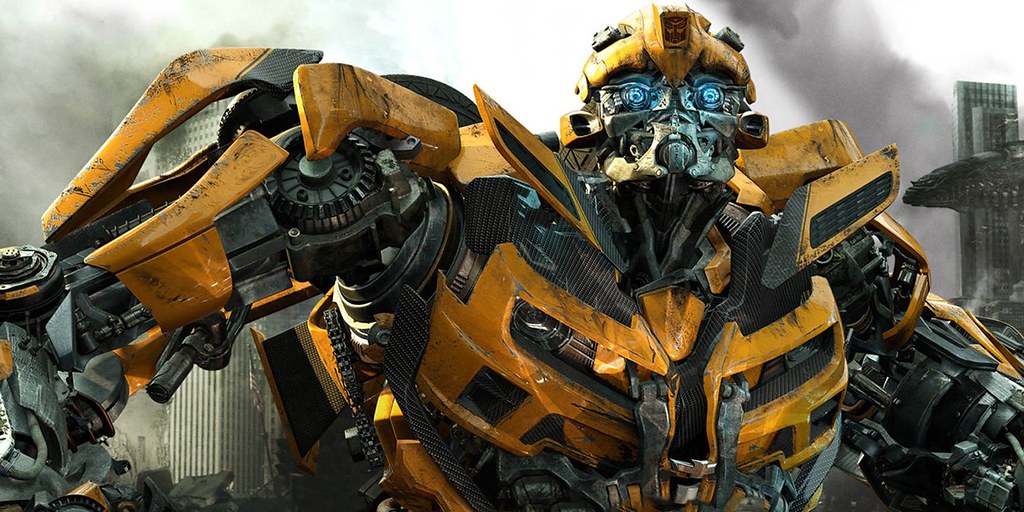 Transformers: The Last Knight is the most expensive Transformers and it is understandable. With all the robots, explosions, and all, no wonder it took a lot of budgets. Plus they have awesome cars, from Mercedes Benz, Ferrari, and all, and of course, our beloved Chevrolet Camaro. I still wonder how they made the Autobots look so real and not CGI look. I love the details and the way the Autobots changed from cars to Autobots. I am still a bit not satisfied with the fact that the story took too fast and as result, it made the audience, or at least me, confused about what the hell is going on. If they made it slower, I think I will be happier.

All in all, despite having many bad reviews, I still think Transformers: The Last Knight is not so bad. Despite having a very quick story that makes things confusing, the action is still as enjoyable as ever. Sometimes things can get exaggerated, but well, it’s a film after all so you’ll find things getting exaggerated quite some times. Mark Wahlberg has done a great job and so does Laura Haddock. Surely you don’t have to doubt Anthony Hopkins. The Autobots still look stunning and Bumblebee still as funny as it gets and as cool as you can imagine. Overall, this is not a bad film. It’s not great but it still good and enjoyable. I am so glad that I am able to see my favourite Autobot, Bumblebee, after all.

I give Transformers: The Last Knight 7.5 out of 10 stars.