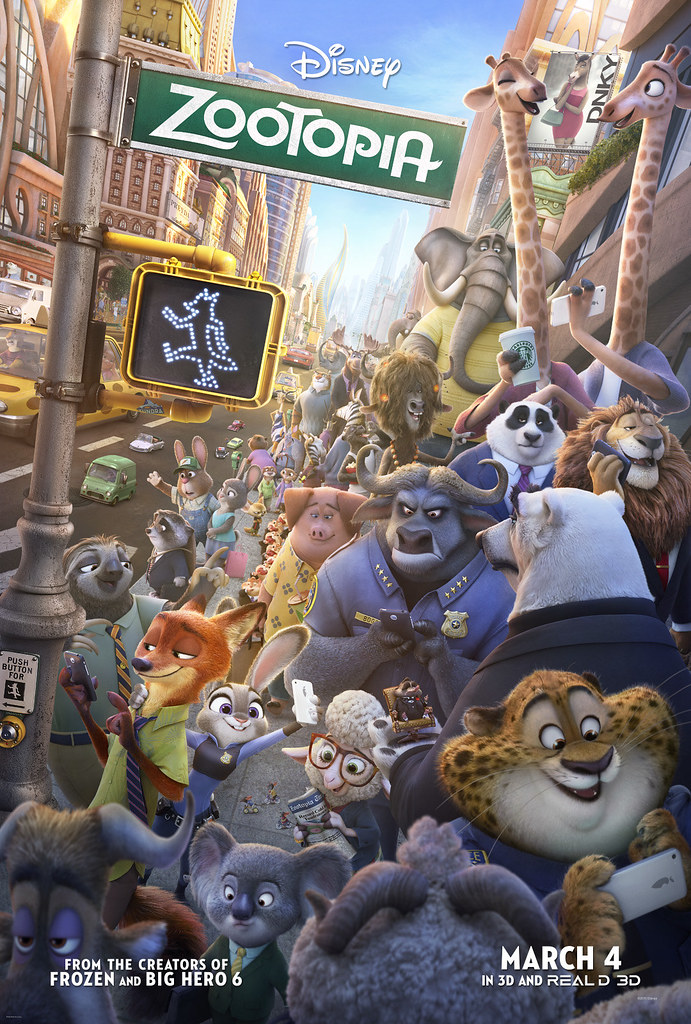 From the largest elephant to the smallest shrew, the city of Zootopia is a mammal metropolis where various animals live and thrive. When Judy Hopps (Ginnifer Goodwin) becomes the first rabbit to join the police force, she quickly learns how tough it is to enforce the law. Determined to prove herself, Judy jumps at the opportunity to solve a mysterious case. Unfortunately, that means working with Nick Wilde (Jason Bateman), a wily fox who makes her job even harder.

I know that Zootopia is so last year, but I’ve just watched it recently even though my sister has already watched it since last year. She did tell me so many times of how good Zootopia is, but I haven’t really thought of watching it until recently. And yes, I have to agree with my sister—and apparently nearly everyone—that Zootopia is indeed a good film. Well, I guess I should never expect less from Disney. As always, Disney managed to deliver a good film with a good story and lots of moral lessons.

At first, I was pretty confused to who are actually the main characters because the poster is so crowded with many characters. I have to be told by my sister which characters are the main characters in the film. Anyway, aside for the oh-so-crowded poster, you’ll know at once who are the main characters once the film is started. And since the beginning, I already know that Zootopia would be a film with great moral lessons. Why? Because since the beginning, they already gave great motivations to the audiences, such as never give up and never feel you’re different just because you’re different. I think it’s a great advice especially if the audiences are mainly children.

“Life’s a little bit messy. We all make mistakes. No matter what type of animal you are, change starts with you.” – Judy Hopps

At first, I thought the main problem is how Judy Hopps fits in the police force because she is the first bunny that has passed as a police officer. The other police officers are usually predator animals or larger animals such as cheetah, lion, bear, or buffalo. Like many other problems in the world, as an outsider, Judy became an outcast. Everyone seems to underestimate her just because she is small and not as scary as other police officers. Much to everyone dismays, Judy is forced to enter the police force and became one of the police officers. She is first assigned to do parking duty by Chief Bogo, who doubted her potential because Judy is just a rabbit. Even though Chief Bogo seemed to be underestimating Judy a lot, there are times that I think he teaches a few thing or two. Like knowing your own limit. Having many dreams are awesome, but there are times that you should restrain yourself and know your limit. Sometimes, knowing what you are capable of is much better than having some improbable dreams.

“It’s not about how badly you WANT something. It’s about what you are capable of!” – Chief Bogo

Of course, the story doesn’t stop there because, like any other good films, there would be obstacles along Judy’s way to become a recognised police officer. She finally got her first major case even though Chief Bogo didn’t believe that Judy would be able to solve it. With the help of a con artist Fox, Nick Wilde, Judy tried her best to solved the mysterious case of missing predators. And she has to meet many problematic along her investigations, including running away, betrayal, and so on.

Although Judy Hopps is the first main character in Zootopia, I prefer Nick Wilde who at first appear to be a con artist but actually a good and loyal friend. He accompanied Judy to solve the mysterious case of the missing predators, even though at first his motivation to help Judy is by force. However, as the story goes by, Nick Wilde proved to be a good friend and taught Judy and the audiences so much. Judy is more stubborn, while Nick is more chill and funny. That’s why I like Nick’s character better than Judy’s. Not only Judy, we get to see Nick’s background story too. Although not as much as Judy, at least we know why Nick is like the way he is now and that what kind of person—or animal—he actually is. Just because he is a fox, doesn’t mean he is bad. He proved to be very useful and very clever as well. In the end, he helped Judy a lot even though he seemed to be untrustworthy at first. The teamwork between Judy and Nick is good and unusual but they are very much entertaining the audiences. Nick may be a fox, but unlike other predators, he is small. That’s why he often being underestimated by others and often not being trusted by others too because he is a fox. From Nick, we can also learn that just because people said we are what we are, doesn’t mean we have to listen. We can be so much more. I really like Nick’s character. Now I understand why my sister like him too.

Nick may be a fox, but unlike other predators, he is small. That’s why he often being underestimated by other predators and often not being trusted by other animals who are not predators because he is a fox. Since the stereotype of a fox is cunning, it’s not surprising that the non-predators will assume he is untrustworthy. From Nick, we can also learn that just because people said we are what we are, doesn’t mean we have to listen. We can be so much more. Nick is a proof that even though he is a fox, he is not as cunning as what others think and he can actually be good and trustworthy. I really like Nick’s character, the development of his character throughout the film. Although Judy’s character has also become more mature throughout the film, I still prefer Nick’s. Now I understand why my sister like him too.

Nick Wilde: I learned two things that day: one, that I was never going to let anyone see that they got to me.
Judy Hopps: And… two?
Nick Wilde: That if the world’s only going to see a fox as shifty and untrustworthy, there’s no point in being anything else.
Judy Hopps: Nick, you are so much more than that. 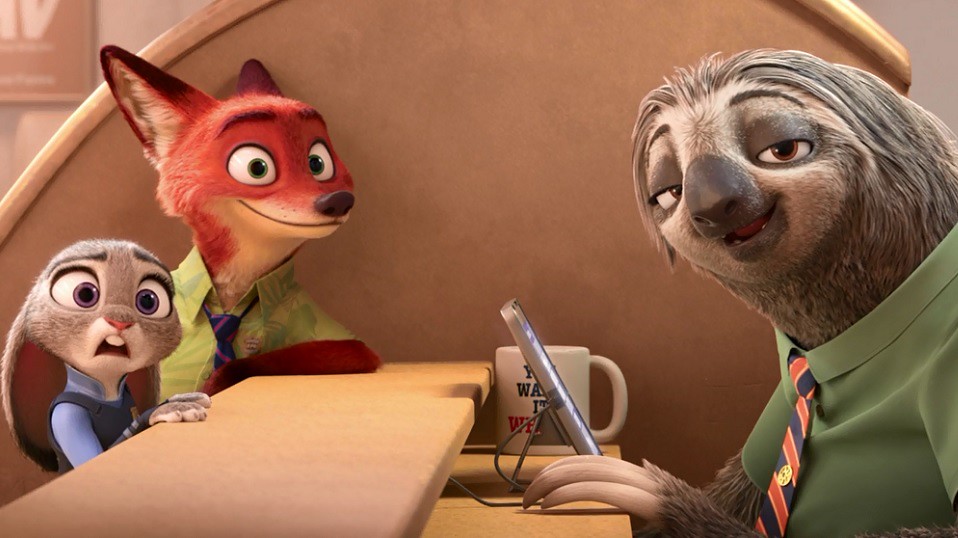 There are quite a few times when Nick Wilde made me laugh. Judy is more of a serious type, while Nick is more of a relax type of person—or in this case, animal. Including when he introduced Judy to his friend, Flash, a sloth who worked at DMV (Department of Mammal Vehicles). That scene was so funny that I have to laugh out loud even though I watched it twice. Flash is super slow, like a film set in a slow motion and even slower than that, making Judy felt frustrated because she needed to get things done faster. Seriously, Flash is hilariously even when the way he laughed will make you definitely laugh too!

“I thought this city would be a perfect place where everyone got along and anyone could be anything. Turns out, life’s a little bit more complicated than a slogan on a bumper sticker. Real life is messy. We all have limitations. We all make mistakes. Which means, hey, glass half full, we all have a lot in common. And the more we try to understand one another, the more exceptional each of us will be. But we have to try. So no matter what kind of person you are, I implore you: Try. Try to make the world a better place. Look inside yourself and recognize that change starts with you.” – Judy Hopps

Aside from Nick Wilde, another character that I like in Zootopia is Benjamin Clawhauser. He is a fat cheetah, working as the receptionist in the Police Department. Clawhauser proved that being a cheetah is not forever scary. In Zootopia, a cheetah can become very very cute and apparently very fat too. I wish I could see him more in the film, but whenever he was on screen, I managed to put a smile on my face. He is super cute! 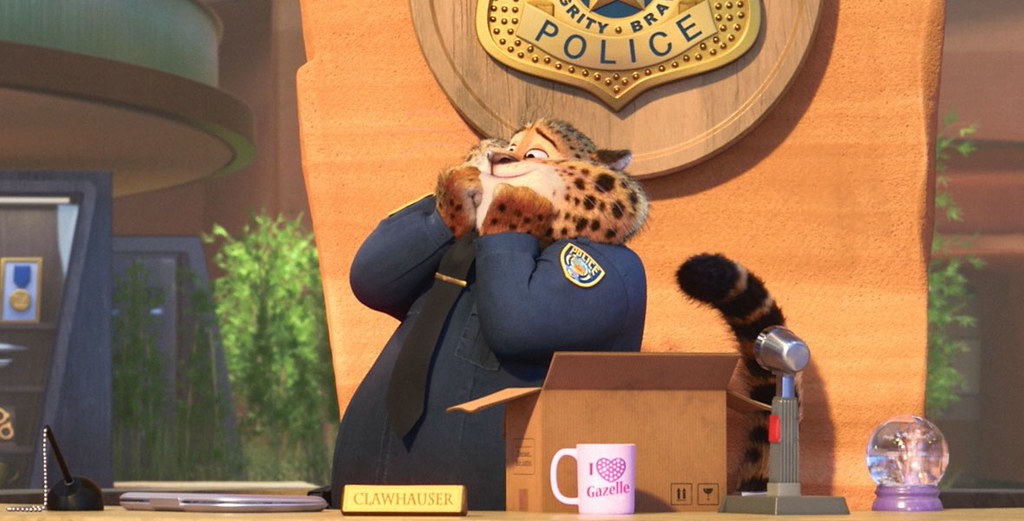 I guess it’s no wonder that Zootopia won the Best Animated Feature Film of the Year in 89th Academy Awards. With so many moral lessons you can learn from the film and a good story along the way, Zootopia really worth the Oscar. I do hope Moana (2016) won the Oscar at that time, but after seeing Zootopia, I guess this film deserved more than Moana. I should never expect less from Disney after all. The animation from Zootopia is also amazing, although not as breathtaking as in Moana, but I like the details of the city. I have no idea that they found the idea of making two different cities in one Zootopia. One place for larger animals like bunny, cheetah, lion, and so on, and other place is for the mice. It’s cute and clever.

I also like the fact that the soundtrack really supported the film. Try Everything by Shakira really is the perfect song for Zootopia. The lyrics really suited well to the plot story of Zootopia, making the song is not only fun to hear but a motivation itself. I have to praise all the production team of Zootopia because they surely made a great film. Other songs also well put and made things more entertaining and spot on.

All in all, Zootopia is a fun family film with so many moral lessons that will be good for audiences, not only children but adults too. I expect nothing less from Disney in terms of this. Zootopia indeed has a very good plot story, with some jokes put in it. Thus making this film is very entertaining after all.