The series is set in the fictional town of Mystic Falls, Virginia, a town charged with supernatural history since its settlement of migrants from New England in the late 19th century. It follows the life of Elena Gilbert (Nina Dobrev), a teenage girl who has just lost both parents in a car accident, as she falls in love with a 162-year-old vampire named Stefan Salvatore (Paul Wesley). Their relationship becomes increasingly complicated as Stefan’s mysterious older brother Damon Salvatore (Ian Somerhalder) returns, with a plan to bring back their past lover Katherine Pierce, a vampire who looks exactly like Elena. Although Damon is initially the villain and harbours a grudge against his brother for forcing him to become a vampire, he later reconciles with Stefan and falls in love with Elena, creating a love triangle among the three. Both brothers protect Elena as they face various villains and threats to their town, including Katherine. The brothers’ history and the town’s mythology are revealed through flashbacks as the series goes on.

Additional story lines revolve around the other inhabitants of the town, most notably Elena’s younger brother Jeremy Gilbert (Steven R. McQueen), her best friends Bonnie Bennett, (Kat Graham), and Caroline Forbes (Candice King), their mutual friends Tyler Lockwood (Michael Trevino), and Matt Donovan (Zach Roerig), and their history teacher, vampire hunter Alaric Saltzman (Matthew Davis). The town’s politics are orchestrated by descendants of the original founding families, all comprising a “Founders’ Council.” The founding families of Mystic Falls include the Salvatores, the Gilberts, the Fells, the Forbes, and the Lockwoods. They guard the town mainly from vampires, although there are many more supernatural threats such as werewolves, witches, hybrids, ghosts and many more.

I didn’t really watch this TV series from 2009. I’ve started to watch it when they already aired for five seasons. I kind of doing a marathon to let myself keep up with the recent episode. I was so excited about the story until the fourth season and during the fifth season, my interest kind of decreasing. However, I am still curious about the story nonetheless. My interest has gone to a minimum during the sixth season when they announced it was the last season for Nina Dobrev. I found it rather crazy. I mean, she played the character of Elena Gilbert, who is basically and literally the main character of the story even in the novel. So it’s kind of absurd that she has to leave the show.

I think I am not the only one who think that way because my sister and my friends also feel the same. Many people speculate the reason why she left but well, I think only Nina Dobrev herself and God who knew the real reason. Anyway, as expected, upon her leaving, the story got more and more uninteresting. In my personal opinion, it’s too forced to fit the story. Even too confusing and too complicated, making me kind of not interested. I am still curious about what’s going to happen next but I am not so excited about it. In fact, I didn’t really wait for it every week like I used to do it. I only watch it out of curiosity.

I was a little bit excited when they announced that The Vampire Diaries will finally end in season eight. I don’t find it bad news, more like a good news indeed. The story is getting boring, therefore, I really want it to end sooner rather than later. Like others, I also was waiting for Nina Dobrev to show up again. I kind of disappointed when she only appeared during the last episode and again the story kind of being forced to fit the comeback of Nina Dobrev in the last episode. To me, she should have come back two episodes, not just one. 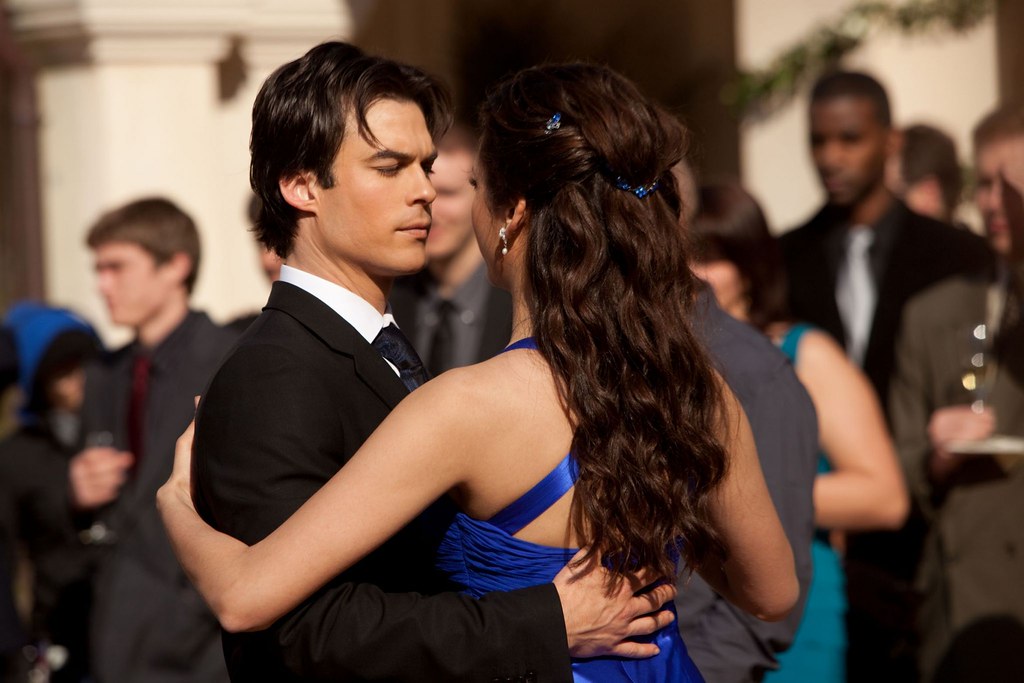 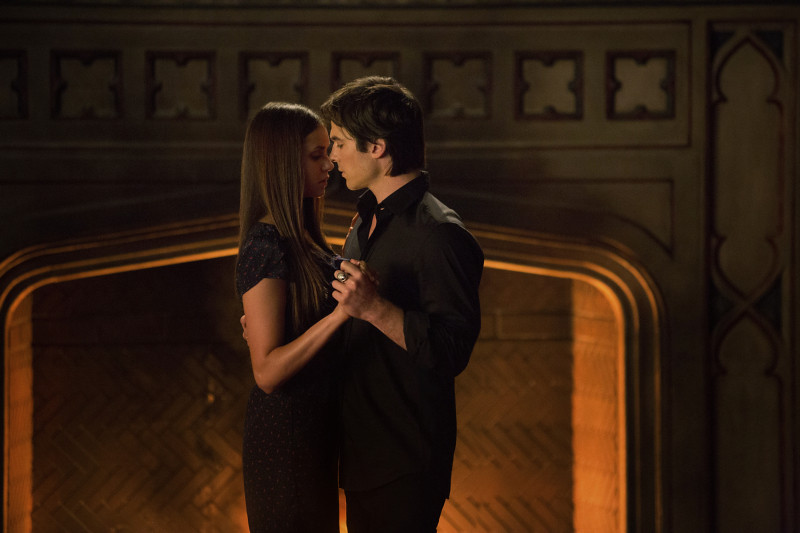 Like many others, I used to like Stefan with Elena because of their epic love. However, as seasons progressed, I much prefer Damon with Elena. Damon would do anything for Elena. He is selfish, yes, but he is good especially with Elena. The character of Damon Salvatore became more and more interesting than Stefan. Although Stefan got his own problem, I think Damon is the one who matures a lot in the story. Damon is more unpredictable. He has grown from beyond annoying to loveable. Even though he could still be annoying, I still like his character more than Stefan. Both Stefan and Damon are handsome, but I prefer Damon. Plus he is very sweet towards Elena. He would do anything to make Elena safe. Stefan would too, but Damon’s eagerness is sweeter and touching. Thus making his and Elena’s love story more epic.

The chemistry between Elena and Damon is undeniable. It’s more sparkling than when Elena with Stefan. The fact that they’re in love in real life supported the chemistry. I’m a bit disappointed when they broke up in real life thus making the chemistry a bit diminished. It’s still there, but not as passionate or as smouldering as before. Nevertheless, it doesn’t change the fact that I am team Delena (Damon Elena). I think Damon and Elena are destined to be together after all.

“Well today, Silas was going to bring her back to life after he got the anchor. But, you told my boyfriend—who has never put anyone’s life before mine, including his own—to kill Silas before he could do that. So, no. I’m not sad about the pizza” – Elena Gilbert

With total eight seasons, no wonder there are many characters died, resurrect then died again, then lived again. Many bad characters became good, and good characters became bad and then good again. So many changes have happened. It’s a bit confusing that I can’t exactly follow up the progress. There are many characters that I didn’t like but ended up like them. Caroline Forbes, for example. At first, I didn’t really like her character in the story but as the story goes on, Caroline’s character changed and she somehow became likeable and eventually loveable. From annoying human to loveable vampire. I also love the development of her love story too. It’s pretty much interesting, especially when she was with Klaus Mikaelson, the original hybrid vampire. It’s not only Damon and Elena who have a sweet love story, Caroline and Klaus make a great couple as well. However, when Klaus left the show to join the spin-off of The Vampire Diaries named The Originals, I was kind of sad. I want to see Caroline with Klaus. I think most of the audiences do think so. Then again, she ended up with Stefan and making the story more interesting than before.

The original vampires are certainly made things exciting and interesting. They were hated at first but in the end, became more likeable. Like I said, some characters grew from troublesome and annoying to likeable. The original vampires are like that too. Although in the end, they all moved to another TV series and The Vampire Diaries was getting other complicated stories without the original vampires interfering. When they made the crossover between The Originals cast and The Vampire Diaries cast, people have been waiting that moment. It’s not much but definitely, people were waiting for the crossover story. I too think the crossover story is interesting. In the end, the crossover between both stories doesn’t really affect much but it certainly made the audience more excited to watch both TV series, if they haven’t already.

“He’s your first love. I intend to be your last. However long it takes.” – Klaus Mikaelson

On the contrary of Caroline, I used to like Elena’s character. But as the story progress, I don’t really like her character. She can be more annoying than Caroline used to. However, I still don’t like the idea of Nina Dobrev leaving the show. No matter how I don’t like Elena’s character, she’s still the main character. She is the girl that started the feud between the Salvatore brothers and she is the girl who attracts many attentions in Mystic Falls.

Bonnie Bennett is another character that I kind of like and dislike time to time. She’s different from her friends who basically are all vampires, though only one who is still normal human and one who is a werewolf, but the other friends are all vampires. She’s the only witch in her circle. Thus making her special. Or at least, perhaps special. The witch part did add some magic to the story and made things more complicated yet at the same time more interesting as well. Bonnie Bennett’s love story is even more complicated than Caroline’s.

With eight seasons in total, no wonder that the story of The Vampire Diaries is a bit too complicated and confusing. It’s like when one problem has just finished, another came up or when one problem hasn’t finished yet, but another problem has shown up and made things worse and more complicated. It was exciting for the first five seasons. But when they got to the fifth season, I wasn’t so excited anymore. Unlike when I watched Merlin, I kept on excited to watch the next series. The fact that Merlin only has 13 episodes at most in one series while The Vampire Diaries has 22 episodes—nearly twice of Merlin—in one season has made The Vampire Diaries has longer stories and of course, too complex.

With so many complicated stories, I was expecting a very good ending. To tell you the truth, the bar that I set for the ending is pretty high. However, I have to say that the ending of The Vampire Diaries is not satisfying. I can’t say I am disappointed, but I can’t say I like it either. Rather than that, I should say that the ending does fit the whole story. It’s better than the original ending they have planned if Nina Dobrev doesn’t leave the show soon. I am not saying that the ending is bad, but it’s not satisfying either. At least Nina Dobrev came back, even though just for a while and as promised, she ended up with her epic love.

I always love supernatural stories. Whether it’s about humans with supernatural power or about supernatural beings, I love them all just the same. I also like when they made fictitious places. Like in The Vampire Diaries they made a fictitious town called Mystic Falls. The name is unique and unusual.

All in all, The Vampire Diaries is a good TV series with an interesting story line, especially if you like supernatural stories. I can’t compare it to True Blood (2008-2014) because I don’t watch that TV series, so I don’t know which one is better. However, I do enjoy watching The Vampire Diaries, especially the first four or five seasons. Unfortunately, after five seasons, the story got more complicated, too complex that I found myself getting bored watching it. Still, I decided to watch it until the end because of my curiosity. The ending is not satisfying like I was hoping for but it does fit the overall story line. Like many others too, I am also disappointed when Nina Dobrev left the show, thus making the story not as attractive as it used to be.

In conclusion, I give The Vampire Diaries 7 out of 10 stars.