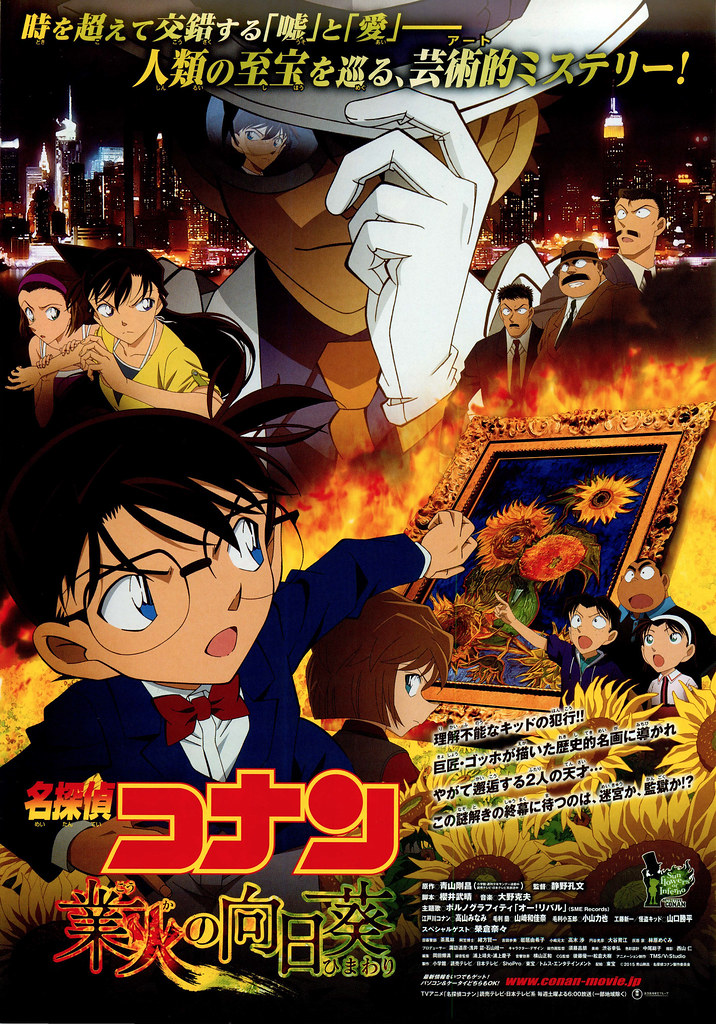 A certain world-famous painting was to be auctioned at an auction house in New York frequented by the rich. The piece of art was one of Van Gogh’s ‘Sunflowers’, a masterpiece thought to be destroyed in Japan. Jirokichi Suzuki fights off all bidders by putting forward 300 million to buy it, stating that he intends to collect all seven of the ‘Sunflowers’ paintings that are scattered around the world. It will be given its greatest exhibition ever in the Japanese museum ‘Lake Rock’, which boasts iron-clad security, he announces live on the worldwide news being watched by Conan and Ran. He has collected seven specialists known as the ‘Seven Samurai’ to protect the Sunflowers, but just as they are about to appear, Kaitou Kid suddenly shows up! He declares war, stating that he will steal the painting no matter what, before vanishing. Why would Kid make such a statement when he usually only goes after Big Jewels?

And just as everyone starts to panic, a high-school detective appears on the scene, having heard rumours of Kid’s appearance: Shinichi Kudo. Then, the ‘White Shadow’ launches an aerial assault on the passenger plane carrying the ‘Sunflowers’ to Japan…The curtain opens on an art mystery that blends truth and lies, focused upon a peerless treasure.

Detective Conan is perhaps the longest anime and manga that I have ever watched and read. Yes, longer than One Piece because I only watched and read One Piece recently. Well not really recently but when I was in high school. Whereas I have known Detective Conan since I was in primary school. I still read the manga but kind of stop watching the anime ever since it wasn’t on television anymore. However, I did watch the movie edition every year. I have watched Detective Conan: Sunflowers of Inferno last year and I watch it again recently.

I always like all the Detective Conan films. I think they have interesting stories, even though some of my friends don’t really like them because they think the stories are bad. I have to agree to disagree there. 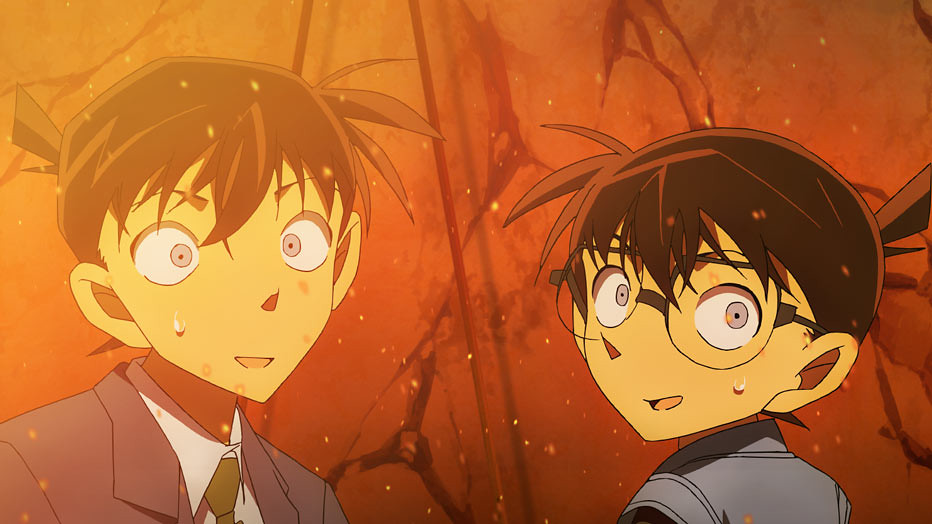 Anyway, Detective Conan: Sunflowers of Inferno is the nineteenth film of this anime. It’s about Van Gogh’s painting and of course, if there’s treasure, Kid the Phantom Thief will always be there. In short, we can call him Kaitō Kid because phantom in Japanese means kaitō. The treasure in this film is a bit different from his usual target. Usually, Kid would steal gems. There’s a history about it, though I won’t talk about it here. Know that he only steals gems and he always returns it. So it’s surprising to see that this time he has his eyes on precious paintings.

Edogawa Conan is called the ‘Kid Killer’ because he seems to always make Kid’s stealing attempt failed. As a detective, of course, his instinct is to stop a thief like Kid but there are times when they would work together because believe it or not, even though Kid is a thief, he is a good person that hates bad people too. To prove that, he always tries to protect people who are in danger, whether is Conan or others. Like in this film, he protects Mōri Ran even though he is just impersonating Kudō Shinichi, still, he protects Ran and Conan with all his might. He never wants anyone to be put in any danger. I don’t know the reason of why making Kid’s face look like Shinichi’s face but we have to admit, every time Kid disguised himself as Shinichi, it is always funny and sometimes can help Conan to hide his real identity as Shinichi.

“People always realise what’s important to them after they lose it. Just like that painting.” – Umeno

In this film, Kid tried to steal the Vincent Van Gogh’s Sunflowers painting. At least two out of the seven paintings. It’s amazing to see that the paintings look alike the real Van Gogh’s paintings. Though I am not sure if the story behind the second painting is true but well, they really have created an interesting background story in this film.

It’s always amazing to see Suzuki Jirokichi’s wealth. It’s like nothing can stop him to get what he wants and he always does everything he can to catch Kid. He’ll make the most advanced technology to protect his treasure and prevent Kid from stealing it. Even he would use that technology to catch Kid as well. It’s also funny to think that every time he makes something, either an amusement park, a building, a tower, or in this film, a museum, every single of them is destroyed or being targeted by the bad guys in this film. Well, it’s no coincidence at all since the story is about Conan, and Suzuki family is one of his closest ones as well. Actually, not only Suzuki’s building but every place that Conan goes seemed to be destroyed, in the films anyway. It has become a pattern and no longer unpredictable.

This time, Kid really does feel more dangerous than usual because he doesn’t only try to steal but there are several attempts in bombings and setting fire to places. The bombings and the fire made the story even more thrilling and exciting to see. But surely, if you have watched like eighteen films of Detective Conan, you can actually predict the outcome of this kind of tragedies. However, to me, it doesn’t stop the excitement to watch it. I am still curious of Kid’s motive in stealing the paintings and all. I am still curious of what would happen next and how the ending would turn up. If you have watched Detective Conan for awhile now, it’s not hard to guess whether Kid is the real culprit or not and that is why I am very curious to what was really happening.

In Detective Conan: Sunflowers of Inferno, it’s not hard to find the other culprit if you really are paying much attention. It was shown clearly during the scenes in the museum. To be honest, I am not that thorough, so when I first watched it, I did not notice it. However, only during my second watch that I knew that they actually already given the clue, you just have to watch it thoroughly. So, if you haven’t watched this film or even if you have but still not notice the clue, you can try to be a detective for awhile and watch everything thoroughly. I kind of like mystery so it’s exciting for me to find out the clues. I know it’s not easy because this is an animation and basically a film, but there must be some clues that the creator will give. 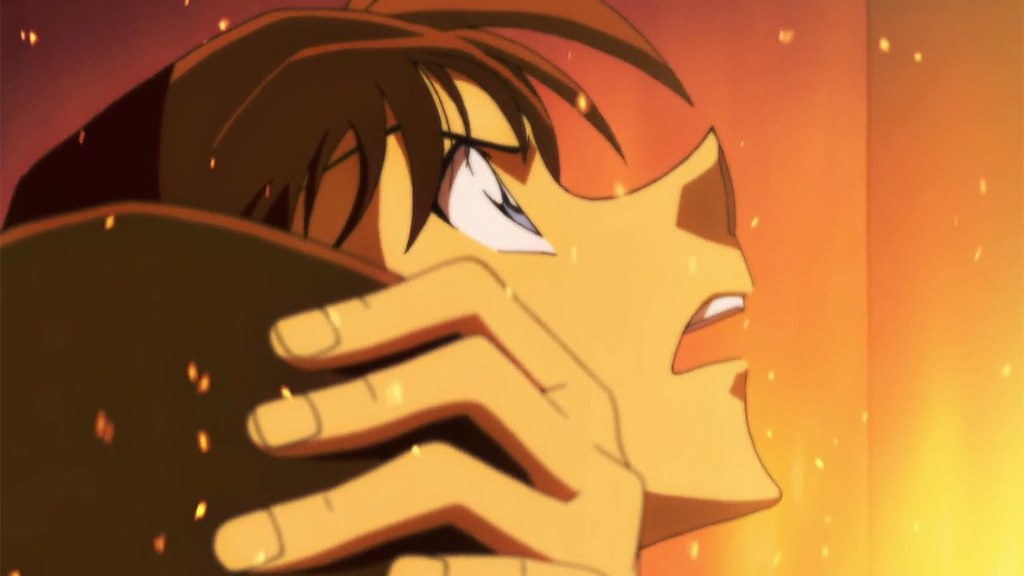 I am also amazed at Conan’s talent. It seems like he’s good at everything and can do anything. Nothing is impossible if it’s about Conan-kun. The coincidence and the miracle surround him are too impossible to happen in real life. Ran’s karate ability can also be unrealistic sometimes. Although I adore girls that can do karate, Ran’s capability is also too impossible to be true. However, since this is an anime, you can’t expect everything to be possible anyway. No matter how impossible things are in this film, Detective Conan: Sunflowers of Inferno still has its own excitement. It is enjoyable to watch no matter what. And I don’t mind if Conan has amazing skills and talent because I really like him. The cases in Detective Conan films are more complicated than in the anime series, so yes, Detective Conan: Sunflowers of Inferno do have a complicated case and it’s always exciting if it involves Kid.

Like Jirokichi’s technology to catch Kid, it’s also fascinating to see the gadgets that Professor Agasa made for Conan. They are impossible yet interesting at the same time. From the voice-changing bow tie, power-enhancing kick shoes, spectacles that being modified, stun-gun wristwatch, Detective Boys badges, turbo engine skateboard, criminal tracking spectacles, button speaker, wristwatch flashlight, ball dispensing belt, elasticity suspenders, and much more. Those kinds of gadgets are unrealistic in the real world. Even so, all those things are created to make the flow of the story better and help Conan a lot. Well, many gadgets in other films are also impossible in the real world anyway. Thus, I don’t really mind about Conan’s gadgets. To me, they make things more exciting and interesting anyway.

So basically, what I’m trying to say is that Detective Conan: Sunflowers of Inferno is a good film that you can enjoy very much. If you are a fan of Detective Conan, I think you can pretty much enjoy the film. Yet, there’s a chance you might not like the story because it’s not the same like the usual Detective Conan’s story. But to me, that’s what made the story is more interesting, exciting, and of course, entertaining. And sometimes, there are great lines said in the film as well. Lines that will teach the audiences some precious lesson as well.

Thus, considering things to account, I give Detective Conan: Sunflowers of Inferno 8.5 out of 10 stars.