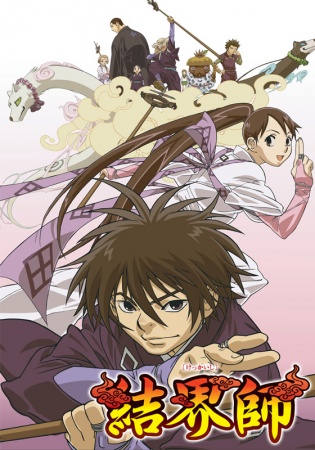 Sumimura Yoshimori comes from a long line of “Kekkaishi,” individuals who have supernatural abilities and are able to destroy evil creatures called Ayakashi that venture into the human realm from time to time. The Ayakashi are demons that look to feast on the power emanating from the land of Karasumori, which also happens to be where Yoshimori’s high school is located. Now, Yoshimori must fight to protect his beloved school and hometown. Although, if it were up to him, he would rather be baking cakes than fighting off the ugly characters that show up at night.

Thankfully, Yoshimori isn’t the only one helping to keep the baddies at bay. His childhood friend and neighbour, Yukimura Tokine, joins him in this righteous battle. Despite the fact that they are from rival clans, these two make a fantastic team. And teamwork is something vital to fighting the evil that is closing in, as the Ayakashi attack in waves, looking to claim the land as their own, and a shadowy organisation looks on, ready to pounce when the time is right.

I firstly know of Kekkaishi from a comic book—comic magazine, to be exact—years ago. After reading it and found it has an interesting story, I decided to look for the anime. It’s unfortunate that the anime is not finished and being continued in the manga. I’ve read the manga but for now, I will just review the anime first.

The story of Kekkaishi is pretty much very interesting. Like the name, a Kekkaishi can use kekkai to eliminate Ayakashi, or to put it simply, kekkai is some kind of a barrier or a shield that forbids Ayakashi—demon or ghost—came in or came out, depends on the usage. Usually, in all the anime that I’ve watched like Inuyasha, for example, a kekkai is used to protect things inside. While in Kekkaishi, the kekkai is not only used for protection but can destroy the demons. There are methods for different kekkai that they can use. It is definitely interesting, in my opinion. I love supernatural stories and that is why Kekkaishi is my kind of story. It’s definitely supernatural with some comedy in it. It’s always a plus point when a film or a TV series or an anime has some comedic stories in it.

The story itself is basically about Yoshimori, who is the legitimate successor from Sumimura family that must protect the land of Karasumori, a land that has immense power that would make an ordinary Ayakashi turned dangerous. Alongside with his childhood friend and neighbour, Yukimura Tokine, who also the legitimate successor from Yukimura family and two years older than Yoshimori, they protect Karasumori land every night. It’s no secret that both families are not in good terms. They are not in bad terms either but they just love to compete with each other. Which family is the better and the stronger kekkai user. It’s funny to see how both families will fight over silly things just because they don’t like each other, but at the same time they are willing to take the risk to help each other out because, despite the family feud, they actually care for each other.”

“I will become stronger. I never wanna see Tokine get hurt, ever again!” – Sumimura Yoshimori

There are certain aspects of Yoshimori that I really like. He is strong, determine, loyal, and yet very funny. Although he seemed to not think first before acting, he’s actually very reliable. In time, he became more mature. Despite his serious job of being a Kekkaishi, it’s funny to see that he also really into cakes. He loves cakes very much. To be exact, he loves making them. There are several moments in the anime that shows how much Yoshimori loves to bake cakes. He is very simple-minded and that’s what makes him funny, I think. His expression is incredibly ridiculous that you will find yourself laughing everytime you see him.

However, even though Yoshimori is pretty much very funny, I think Madarao is even funnier. Madarao is a wolf demon that has partnered with Sumimura family for centuries. When he was alive, Madarao is actually a mountain dog until one day he died and met the founder of Kekkai user. Together with Hakubi, another dog demon that partnered with Yukimura family, they accompanied the legitimate successor to protect Karasumori land. Since their nose is pretty sharp, they can smell and sense the Ayakashi right away. Hakubi who accompanied Tokine is funny, but Madarao has stolen the show for sure. He is extremely funny. His expression is just so ridiculous and exceptionally hilarious. How his voice can change from serious to ridiculous, depending on the situation. Combined with Yoshimori, both of them are the ultimate jokes. Frankly speaking, I laugh a lot when I watch Kekkaishi. No matter how many times I watched Madarao, he never fails to make me laugh. Yes, he’s that funny. Hakubi is funny but Madarao is extremely ridiculous and hilarious. Everything he does, when he’s not being serious, is pretty much funny all the time. 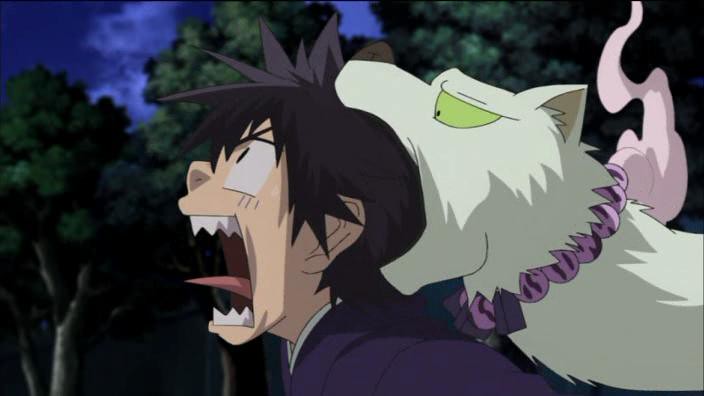 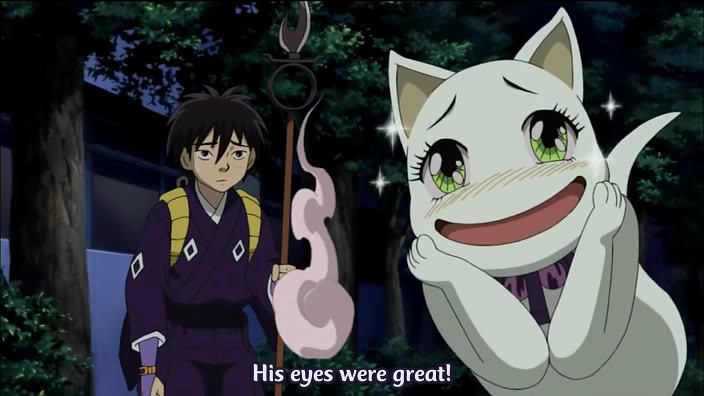 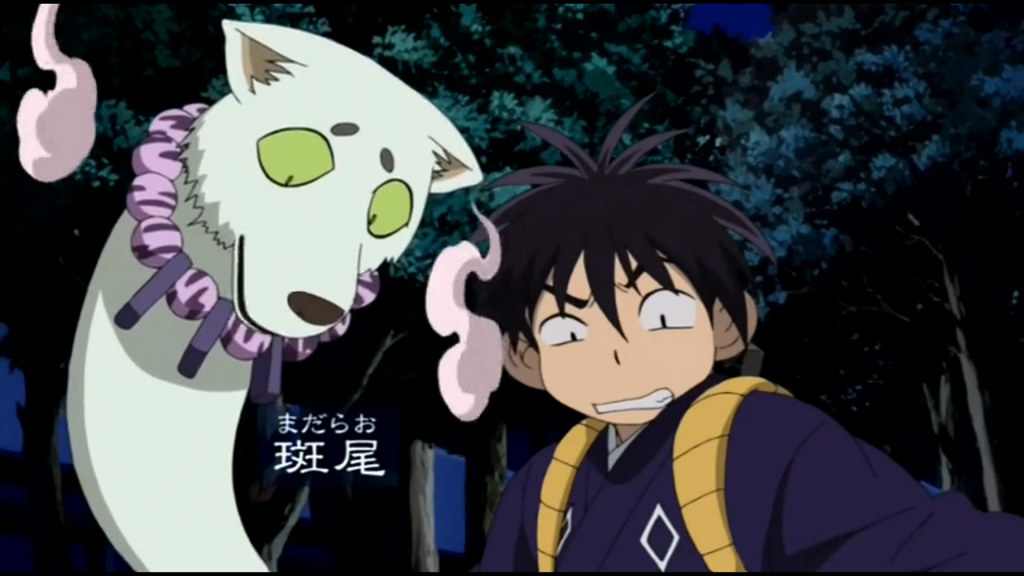 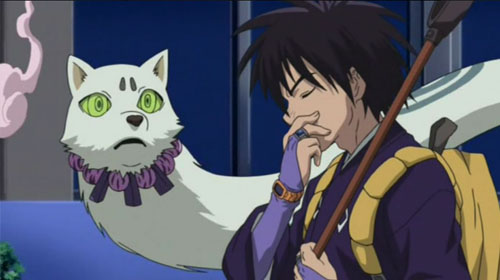 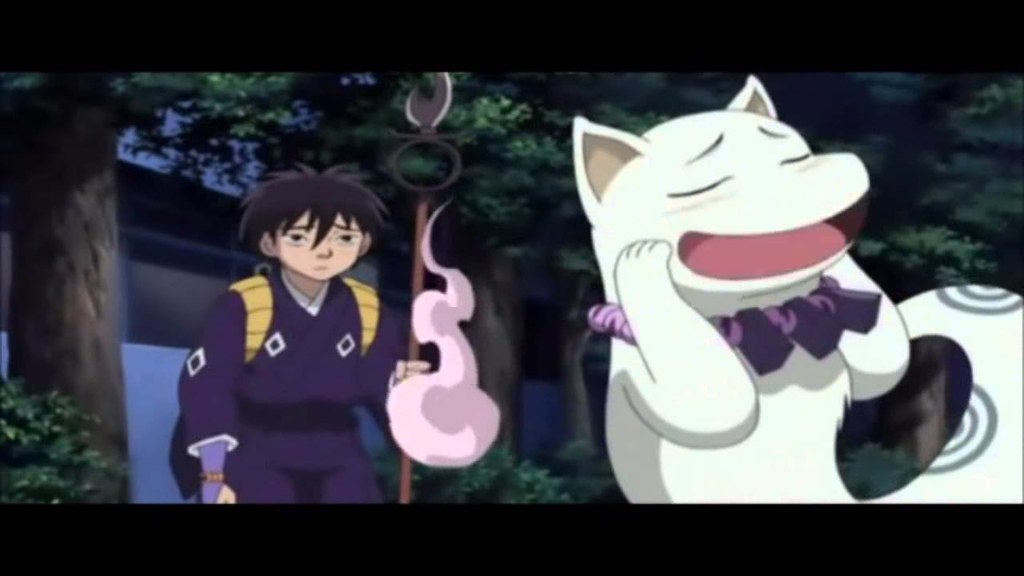 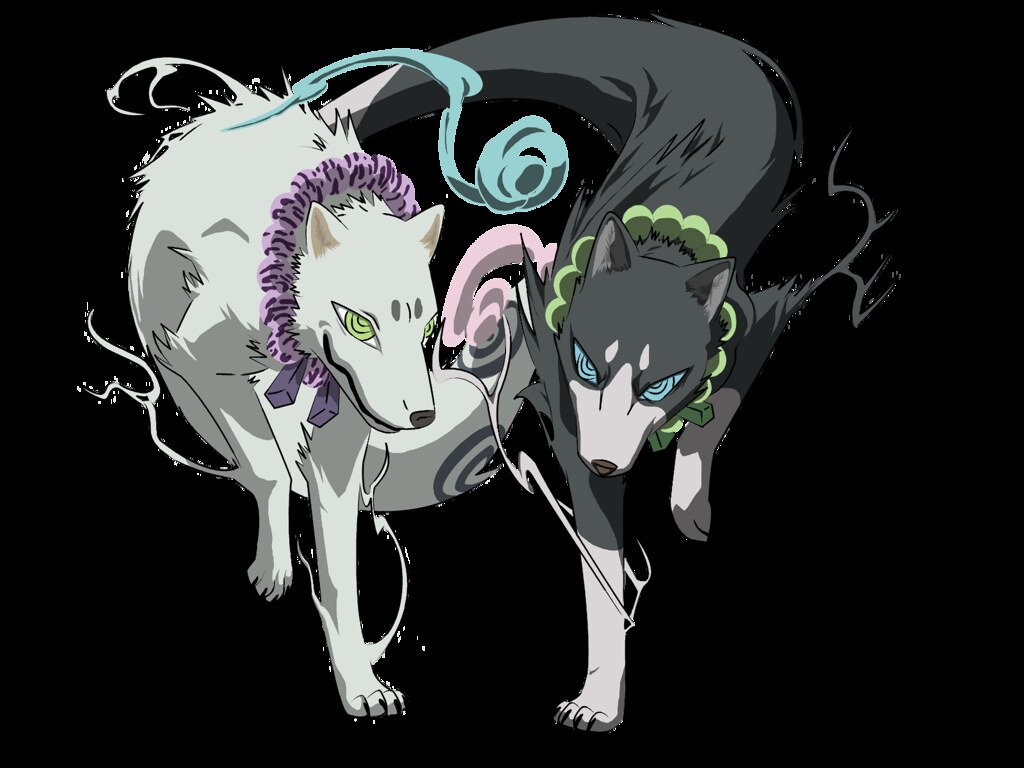 Like their partners, it seems like Madarao and Hakubi love to quarrel too. There are times that they would compete with each other but if things got serious, they would rely on and help each other. They are not exactly in good terms but they definitely not in bad terms either. Much like their partners. Since Madarao has lived longer, he seems to always brag that he is better than Hakubi. I don’t see much differences between them but there are some moments that would make his words true. Madarao is indeed better and stronger than Hakubi somehow. And yes, Hakubi is also funny but Madarao is way more ridiculous. Nonetheless, these dog demons have made the story funnier and more entertaining.

Although the story is mainly about Kekkaishi, it seems like Yoshimori has stolen the show. Nearly most of the times the story is focused on him and thus making Tokine wasn’t in the spotlight. In terms of strength, Tokine is indeed weaker but she is also smarter than Yoshimori. She can use techniques that Yoshimori can’t. She seriously learns things left by their founder. However, Yoshimori is stronger. While Tokine learned all other techniques from the scroll left by their founder, Yoshimori learned them by himself. Not as good as Tokine, but definitely more suitable for him who has unlimited strength. They both are good but in frankly, Yoshimori is better. That’s why there are times that Tokine can’t beat an Ayakashi herself, especially when the Ayakashi is huge. She can’t make a very large kekkai due to her limited power, unlike Yoshimori who has no trouble in making a humongous kekkai. However, despite her lacking power, there are certain points that make Tokine’s role is important. She certainly thinks before acts, unlike Yoshimori. 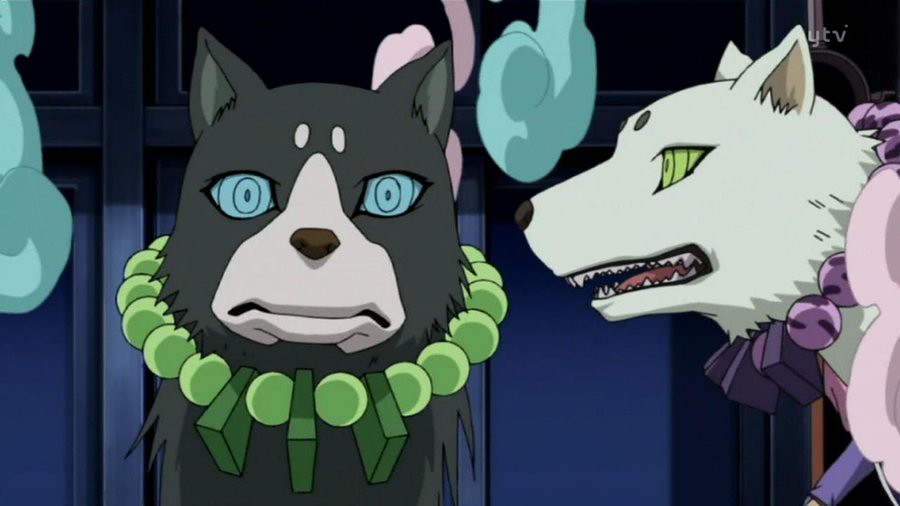 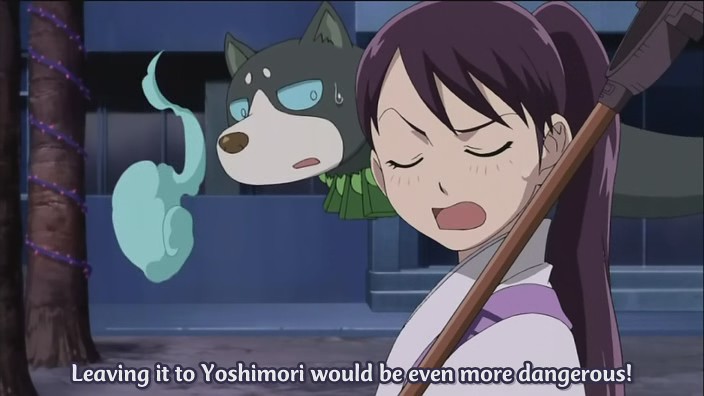 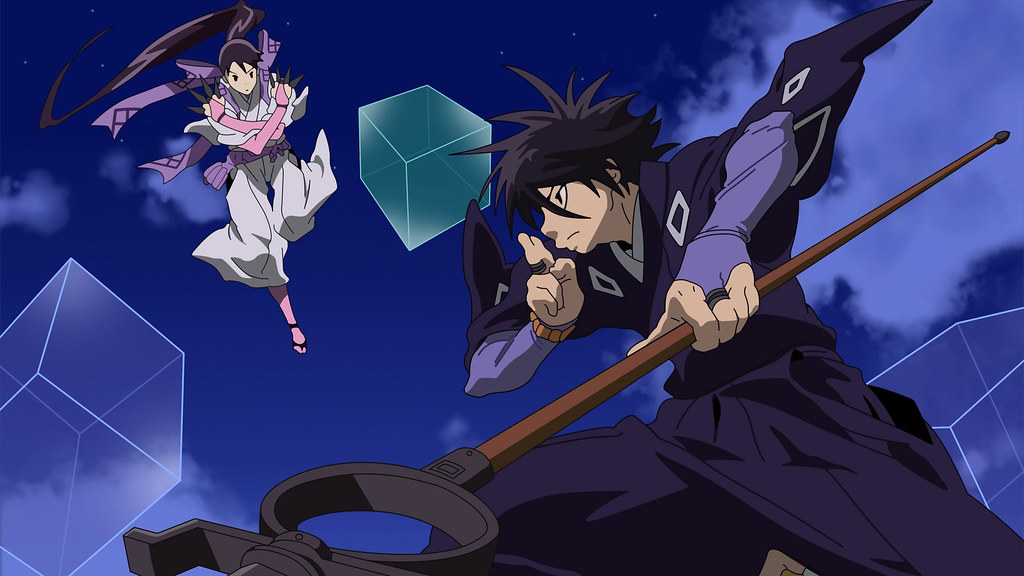 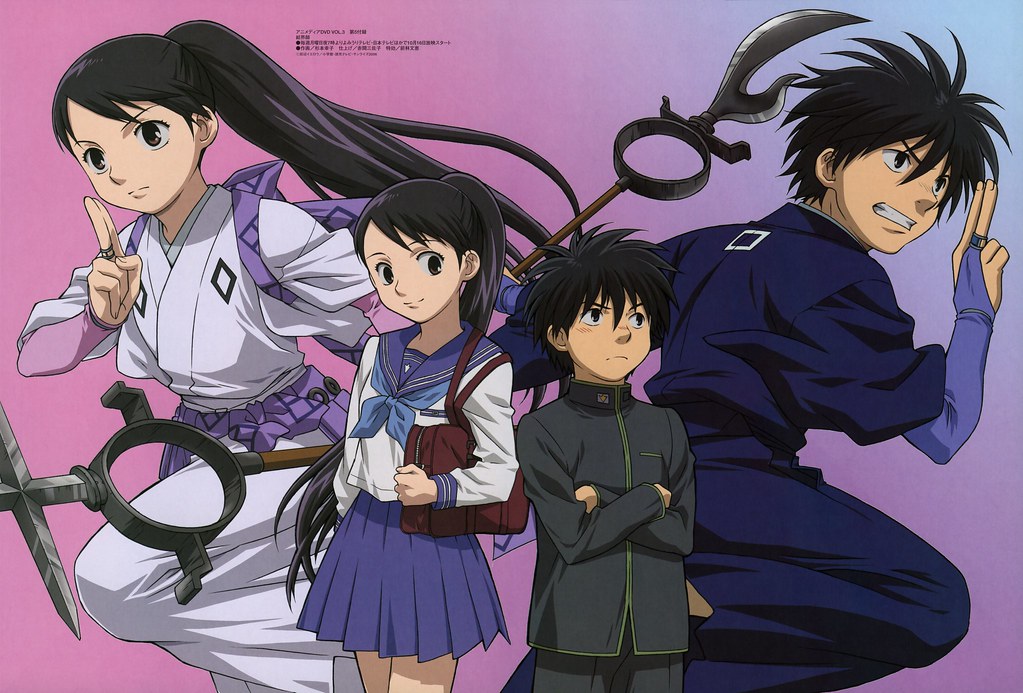 The first half of the series, Kekkaishi is all about Karasumori and all the Ayakashi who wanted its power. How Yoshimori and Tokine caught all the invading Ayakashi every night. They also introduced us an organisation named Urakai, where Yoshimori’s older brother works in these days. There are also people in Urakai that have special abilities. They also told us the relationship between Yoshimori and his brother, Masamori. Masamori is stronger but he’s not the legitimate successor, therefore he can’t protect Karasumori’s land the way Yoshimori do. The relationship between these two brothers is interesting to see. It seems like they are jealous of each other, without knowing why the other party is jealous.

Things get more interesting when they introduced a new partner from Urakai, named Shishio Gen. Although they seemed to not like each other at first, in the end, both Yoshimori and Tokine relied on Gen very much and they became good friends. Despite his serious face all the times, Gen could be really funny too. There are times when he would make me laugh and I’m sure if you watch it, he’ll make you laugh too.

After the first half of the anime, things get more thrilling when they introduced us a new enemy. A more dangerous Ayakashi whose aimed is still the same like others, gaining Karasumori’s power. Things get more complicated and serious, even there are some episodes that made me even cry! The funny things are still there of course, but the story has become more complicated and to me, it’s a good thing. The ending of this anime is both satisfying and not satisfying. I mean, the problem is solved but there are unsolved problems as well. I don’t think they would make a continuation of Kekkaishi in the anime version, but you would definitely find it in the manga. I’ve read the manga and like the anime, it’s still entertaining and funny. Even though I can’t hear Madarao’s funny voice anymore, I can still see his funny expression alongside with Yoshimori. Plus the story becomes more and more complicated.

To wrap it all up, Kekkaishi is an entertaining anime with nice plot story. It’s funny and thrilling at the same time. You are definitely going to enjoy the anime very much. At least I do. I laugh a lot. Like really laugh out loud a lot. It’s been awhile since I watched an anime that would make me laugh this lot. Last time it was Hunter x Hunter (2011-204) that made me laugh a lot—still does, I believe, if I watched it again. And this time, it is Kekkaishi’s turn to make me laugh.