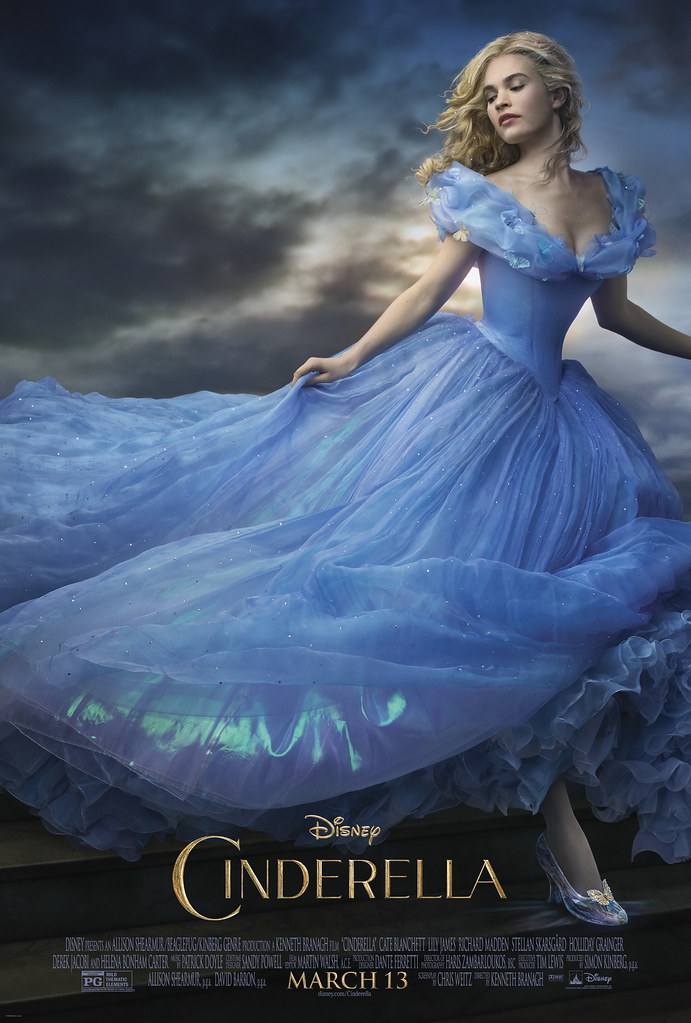 After her father unexpectedly dies, young Ella (Lily James) finds herself at the mercy of her cruel stepmother (Cate Blanchett) and stepsisters, who reduce her to scullery maid. Despite her circumstances, she refuses to despair. An invitation to a palace ball gives Ella hope that she might reunite with the dashing stranger (Richard Madden) she met in the woods, but her stepmother prevents her from going. Help arrives in the form of a kindly beggar woman who has a magic touch for ordinary things.

Two years ago, at this time of year, Cinderella is released in theatres. Like Beauty and the Beast (2017), this Cinderella is also a live-action adaptation by Disney. I was so excited when I knew about it. I first expecting something different from the real cartoon. Like Maleficent (2014), I was hoping a twisted story. However, there’s no twist in this version of Cinderella. It’s still just the same as the original version. But it doesn’t disappoint me at all because there are things that added in the film too, to fill in the gaps from the original film, just like the latest Beauty and the Beast.

The story is basically the same like in Cinderella (1950) that we all have known all these years. However, there are more lessons that can be learnt from this film. It’s very good for teaching children. There are some stories added to the film, like I said, to fill in the gaps from the original film. Like how Cinderella’s stepmother and sisters don’t recognise her at the ball and the real reason why Prince Charming is attracted to Cinderella in the first place. I think it does make a lot more sense than the first film. Even the reason why the iconic glass slipper doesn’t fit in anyone else but Cinderella is more make sense than the original version. I also like the fact that they gave us a little bit story of Cinderella’s mother. How she taught Cinderella so many things that made her the way she grew up. I would like to see the animals can talk to, but unfortunately, they didn’t. I am not disappointed by it, though. I am pretty satisfied with the overall story. There are some funny moments in the film as well that can make you smile and laugh a bit. 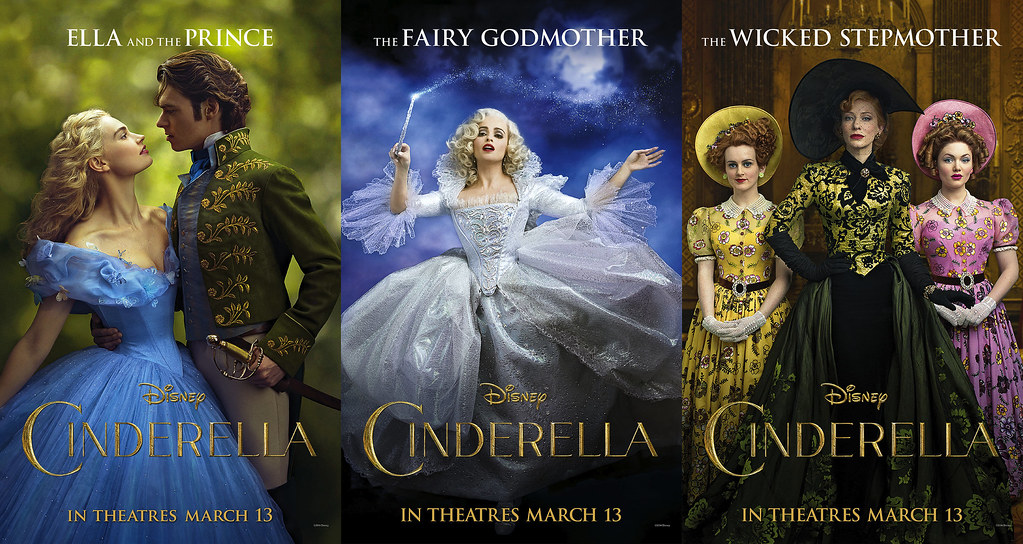 I never knew Lily James before because, at that time, I haven’t watched Downton Abbey (2010-2015). I also didn’t know about Richard Madden because I haven’t watched Game of Thrones. However, despite the fact that I didn’t know them back then, I was satisfied with the cast. All of the cast, as a matter of fact. It’s even interesting to have Cate Blanchett as the stepmother and Helena Bonham Carter as the fairy Godmother. Both of them are great actresses that have played many great films before, including big franchises like The Lord of the Rings and Harry Potter. It’s interesting to see that most of the cast are British, except for Cate Blanchett and Stellan Skarsgård. I wonder if it’s a coincidence or not but it’s kind of a fun fact to me.

I like the idea of adding a background story of the Prince, like the relationship between him and his father. It’s more realistic than in the original story. I think of all the new stories added in this live-action film, my favourite part is the reason why Prince Kit—Prince Charming’s nickname in this film—chose Cinderella in the first place. As I said before, it does make a lot more sense than in the original film. Of course, Derek Jacobi played a very good father. Unlike the original cartoon, Derek Jacobi’s king was calmer and seemed wiser but not as funny. However, I like the relationship between him and the prince.

As for the stepfamily, Cate Blanchett is a great actress after all and therefore it is no doubt that she would nail playing the character of a stepmother. The stepmother is still evil as ever and Cate Blanchett surely embodied the character really well. Surely she does look evil in this film. Her expressions are despicable beyond annoying. Like the original stepmother that we all hate.

I also like the new character in Cinderella. Instead of the Grand Duke, it’s the new character of Captain that helps Prince Charming a lot. The Captain can also be funny and therefore added some laugh and excitement to the film too. The fact that the Grand Duke is not as good as in the original film makes the story even more interesting. Basically, this live-action adaptation Cinderella is eighty percent still the same like the original. The addition story fills in the gap that the original is lacking before, so it’s actually great to have some new stories and characters added to this version of Cinderella.

From the beginning, the most exciting parts that I want to see from this Cinderella film is the dress. The dress is magnificent and beautiful. The dress in the original film is already beautiful and therefore it’s exciting to see that beautiful ball gown comes to live. The designer really did a great job in making the dress. It’s iconic, beautiful, and magical. I think ever since that film, everyone wants a Cinderella’s ball gown dress. Including me, to be honest. 10,000 Swarovski crystals were added on the dress and Lily James’s hair. It’s more than on Belle’s dress in the recent Beauty and the Beast film.

Lily James looks beautiful in that iconic blue dress. Although some said that her waist looks like it was being photoshopped because it is too small. But the combination of her already small waist, corset, and the poof of the blue dress, Lily James’s waist indeed look unnaturally small—or that’s how I read about her. At any rate, Lily James looks perfect in the dress. The dress is beautiful and enchanting! I love everything about the dress except the butterflies added on it. However, until this moment, I am still debating whether I like Lily James’s dress in Cinderella or Emma Watson’s dress in Beauty and the Beast. To me, both dresses are beautiful and definitely have their own plus points. 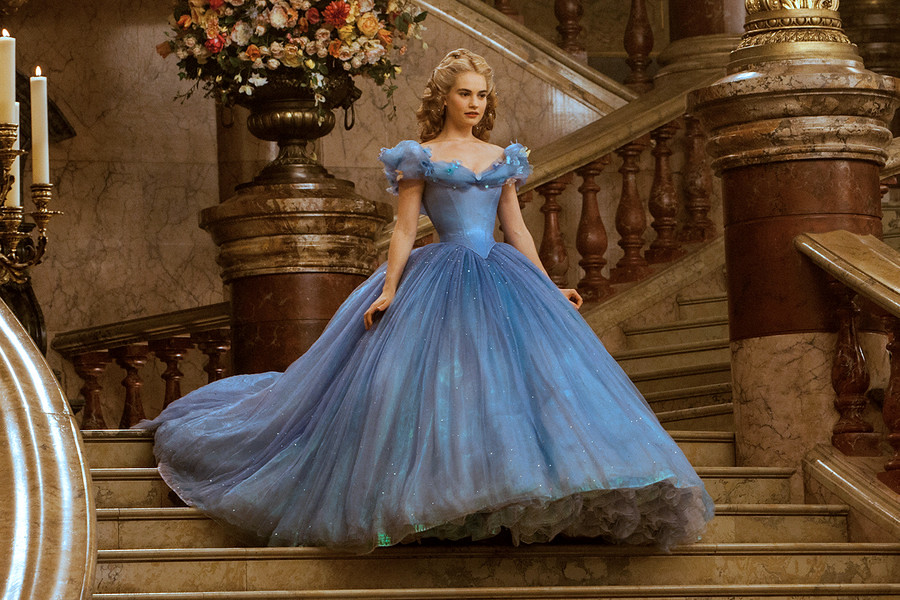 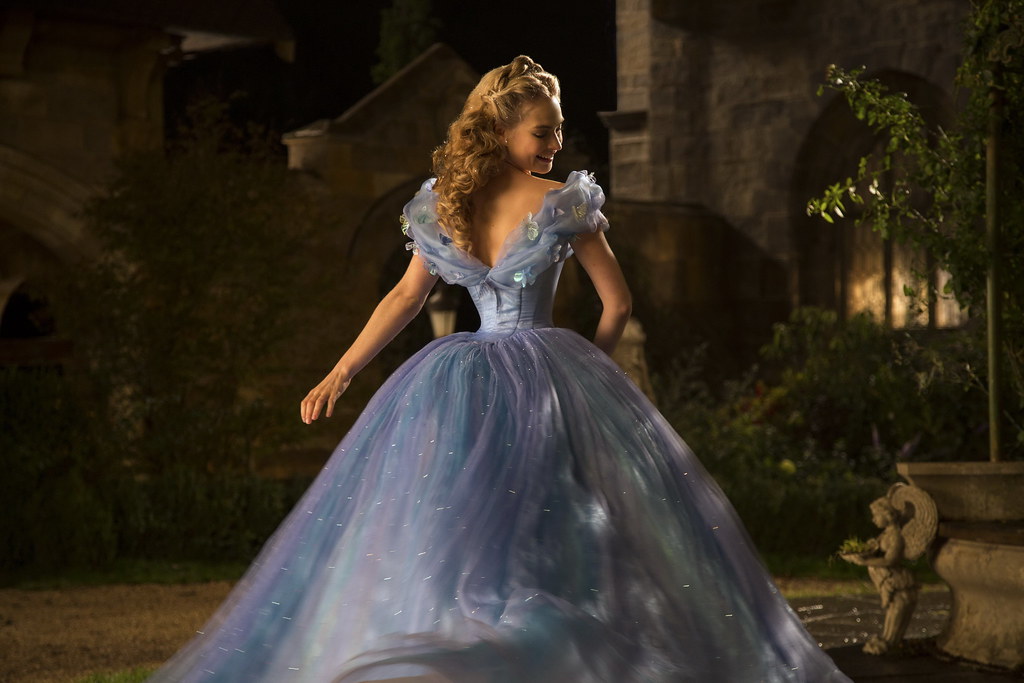 I also love the way how the dress moves during the dancing scene. It flows beautifully every time Lily James moves and makes a twirl. As always, the dancing scene always my favourite scene in nearly all films. From this Cinderella film to Beauty and the Beast to Crimson Peak (2015) to The Young Victoria (2009) and Enchanted (2007). I love films with the dancing scene in it, especially if it’s a waltz scene. I take it the dancing scene in this film is not an easy scene to take, a bit tricky, I must say. Richard Madden has to lift up Lily James who’s wearing a big dress like that, certainly, it’s not an easy thing to do. Especially when the dress is also quite heavy, or so I heard. Plus, Richard Madden has to do it a couple of times. It must have been hard for him and for Lily James too. However, they pulled it off perfectly. Their dancing scene is certainly very beautiful and magical. 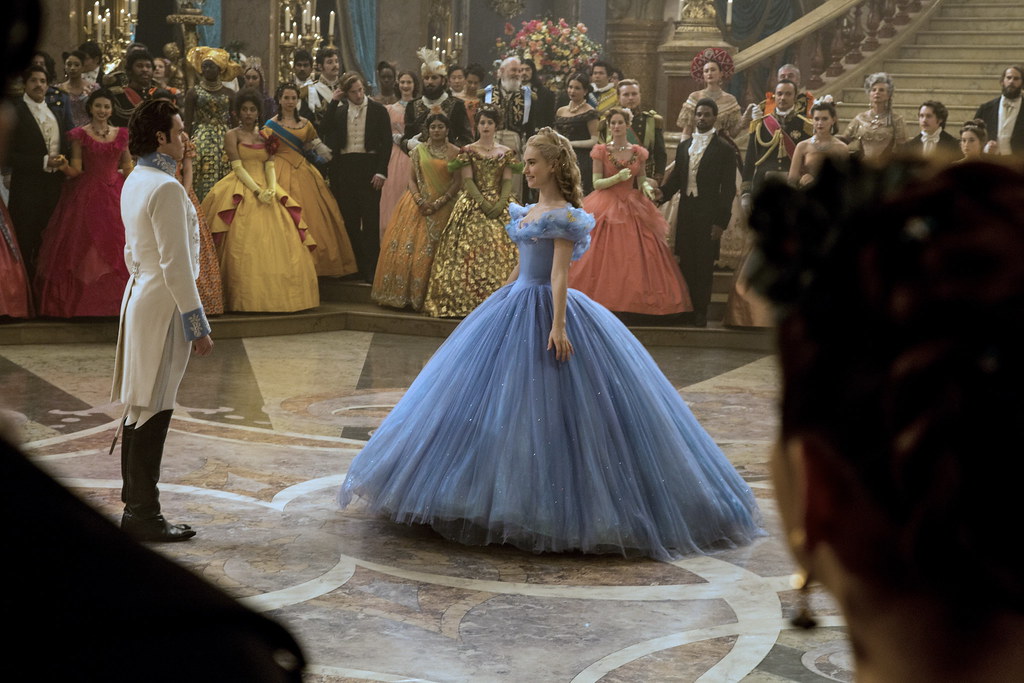 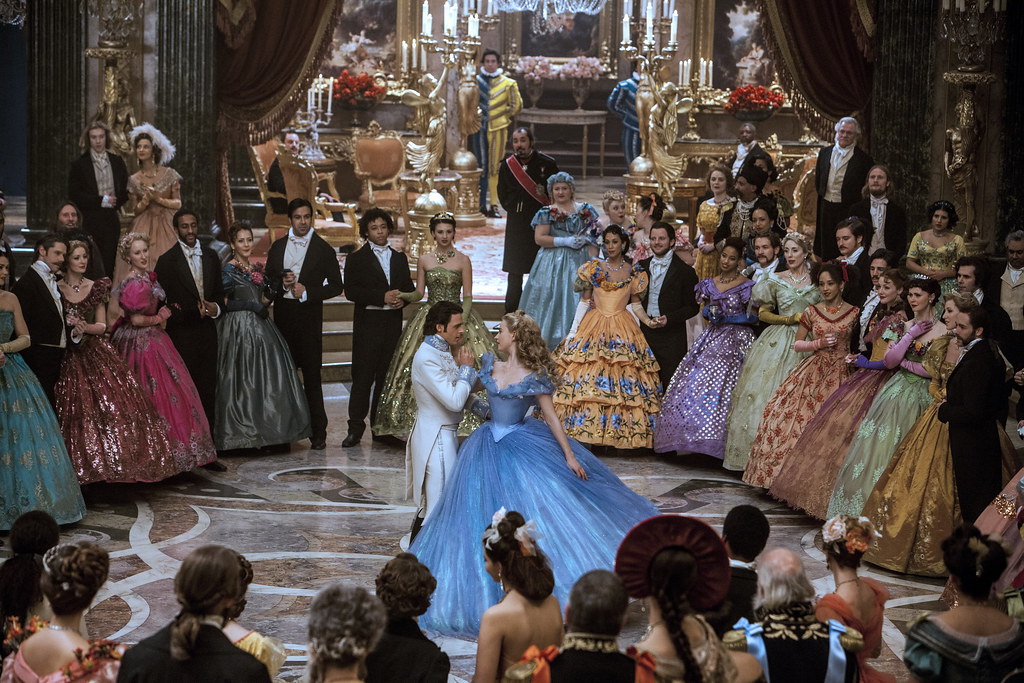 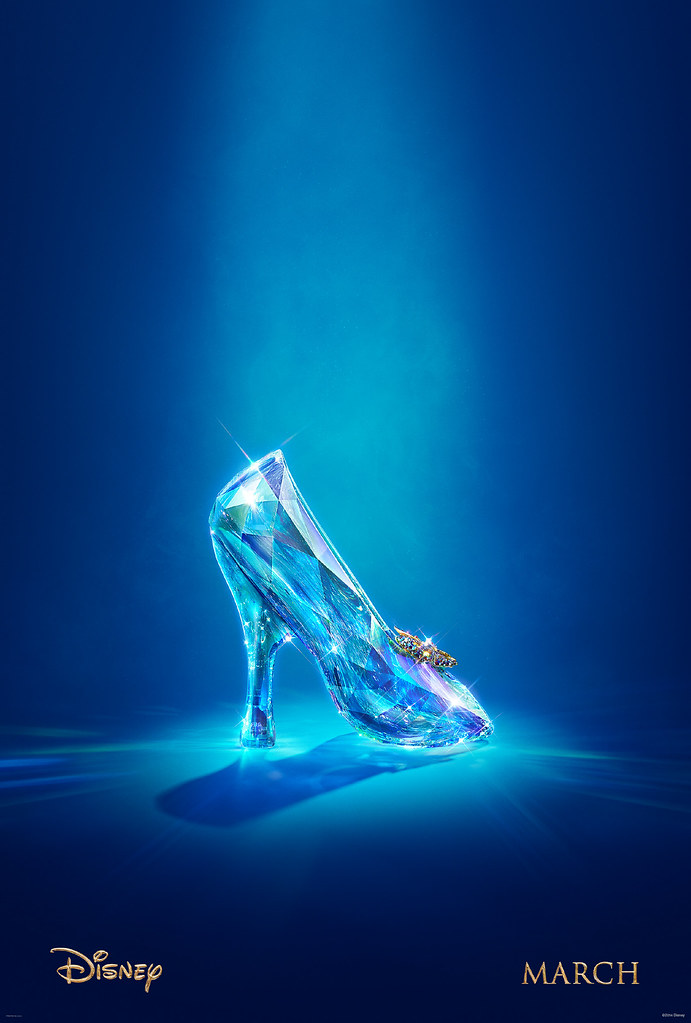 “I have to tell you a secret that will see you through all the trials that life can offer. Have courage and be kind.” – Elsa’s Mother

The setting in this film is also very magnificent as well. The castle is huge, at least the ballroom for the dance looks huge. Cinderella’s house is also beautiful in its own way. Not to mention the dresses worn by all the princesses around the world are very colourful indeed. I heard they were inspired by every Disney princess’s dress so you can basically see every Disney princess’s dress from Snow White to Princess Aurora to Princess Tiana and so on. They are beautiful. So, again, no wonder if they received Oscar nomination for costume design. The only thing that I wish was there in the film is the mice. There are mice but they can’t talk, whereas in the original film, the mice can’t talk and they are kind of funny. The relationship between the mice with Lucifer, Cinderella’s stepmother’s cat, is, in fact, funny in the cartoon. But I don’t really see it in this adaption. I guess it’s not a big deal since the story focuses on Cinderella anyway. The animals that were turned into magical beings like horses, footman, and coachman are different from the original film. In this film, they used goose and lizards instead of mice and dog. I don’t know why they made it differently but I also don’t think it’s a big deal anyway.

Cinderella may not be my most favourite princess, but I think she’s one of the most famous Disney princesses after all. This live-action adaption of Cinderella certainly has many plus points. It basically has the same story line with the original, except there are some plots added to the film to make the original story more realistic. Fill in the gaps of the original story, to be exact. There are some funny moments too in this film, so the story is pretty much entertaining in many ways.

To wrap it all, this live-action adaptation Cinderella is a great film after all. It is beautiful and entertaining. The story is not so different to the original film. Nothing twisted but some are plots are added for the sake of the story and that’s why the film is perfect. I love the main moral lesson that was given in the film. It can teach younger audiences to always be brave and be kind. I think it’s truly a great lesson that anyone can learn, not only for children but also for adults too. I really love the Cinderella’s blue dress too. It’s truly beautiful. Lily James and Richard Madden are perfect for the role of Cinderella and Prince Charming. The roles suit them very much.