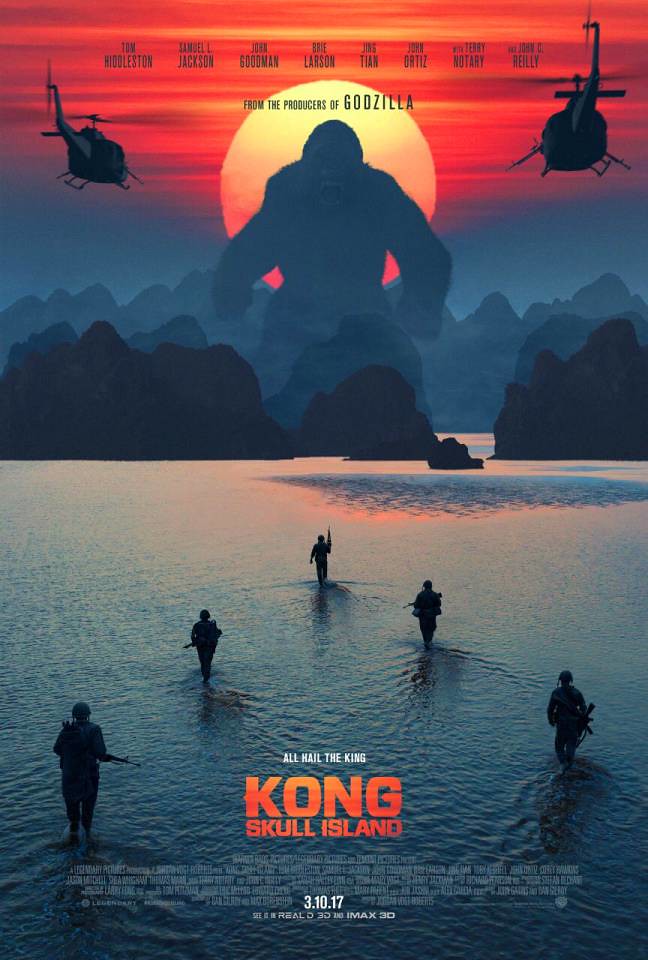 A diverse team of scientists, soldiers and adventurers unite to explore a mythical, uncharted island in the Pacific, as dangerous as it is beautiful. Cut off from everything they know, the team ventures into the domain of the mighty Kong, igniting the ultimate battle between man and nature. As their mission of discovery becomes one of survival, they must fight to escape a primal Eden in which humanity does not belong.

I am so excited when I found out that Kong: Skull Island has come out on 8 March in Indonesia. That’s why I decided to watch in on 9 March, which happens to be my birthday as well. I took it as a gift for my birthday by seeing Tom Hiddleston. Yes, I really really love him. I’m a huge fan. Anyway, I didn’t expect this film is going to be great. Good enough is already enough for me since the first aim of watching this film is to see Tom Hiddleston anyway. However, Kong: Skull Island has exceeded way beyond my expectations. Seriously. I never thought that this film would be this good.

“Kong’s a pretty good king. Keeps to himself, mostly, but you don’t go into someone’s house and start dropping bombs unless you’re picking a fight.” – Bill Randa

This film is indeed massive. I really didn’t expect this film to be so good. I love the choice of the time setting. It is somehow better than King Kong who took place in the year of 1933. Even though the year of 1933 everything seemed to be more glamorous, instead the year of the 1970s which seemed more gloomy because of the war, I think it is the right choice of time setting to do an adventurous expedition. The map to Skull Island also seemed more realistic than before. Not only the time setting choice, the places also set really great. The clothes, the makeup, the music, the cars, the places, everything feels so 1970s. They really thought everything thoroughly. I’m in awe. Truly. I even fall in love with Mason Weaver’s camera, who was portrayed by Brie Larson. That camera is old and vintage and classic. I really love it. Seriously, the properties are awesome and well thought. All the places in the cities also look great and felt nostalgic, while the view in Skull Island is beautiful. The design production team has made this film looks great and flawless. The CGI effect is indeed impressive. The production team has done a really great job. Not to mention the songs. They were perfectly spot on. The choice of the soundtrack songs is indeed really great. Like the setting time, the songs were also felt like we were brought back into the 70s during rock and roll songs were on hypes. Not only the songs worked very well with the scenes, they made the scenes looked more thrilling and exciting. 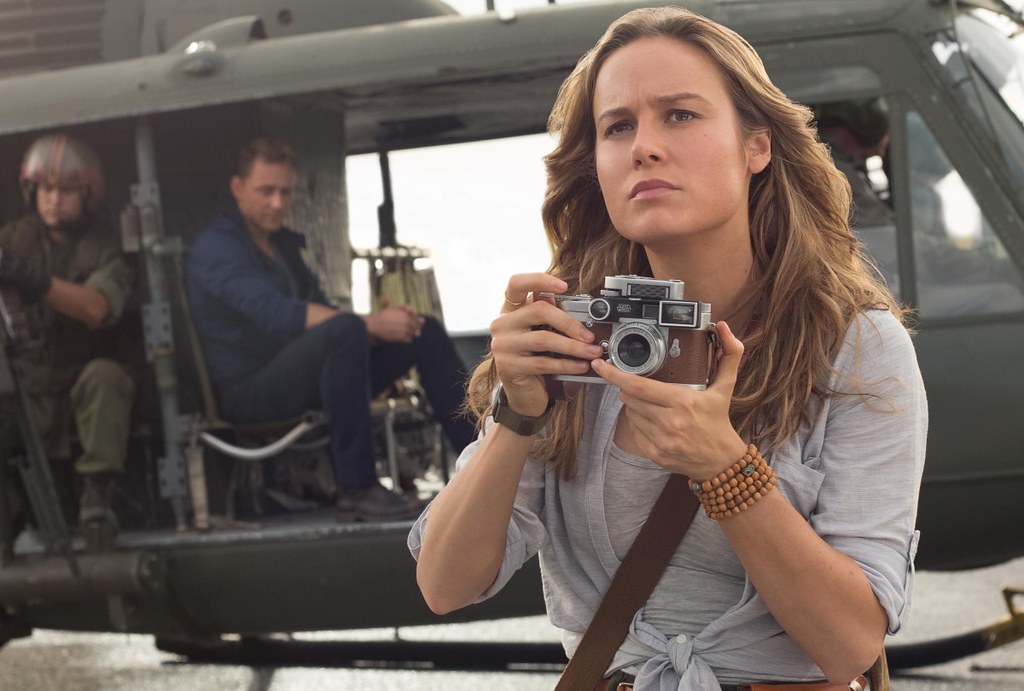 I watched Kong: Skull Island in IMAX 3D and I am not regretting it at all. The 3D effect is amazing, it definitely makes everything more exciting. I get the same feeling when I watched Jurassic World (2015). It’s bloody exciting. The theme is somehow similar, right? Facing ancient time animals. However, there are no dinosaurs in Kong: Skull Island, at least not anymore. Instead, the enemy of Kong is now scarier than a T-rex. It’s more exciting though scarier. They made the Kong itself bigger than before, like really really huge. The size of a mountain, I must say. Not only Kong, the enemy is also bigger and many other creatures also were made bigger than before. As Tom Hiddleston said, this film is about a journey into the unknown and once again human beings are put back into the food chain and they are not at the top. Sounds bloody interesting, right? 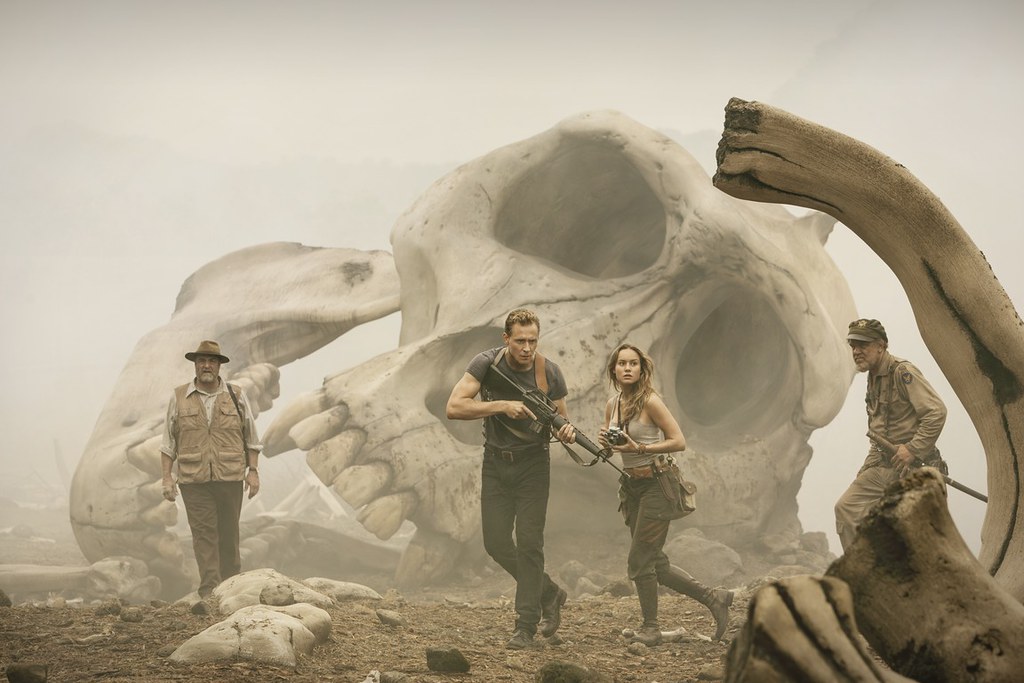 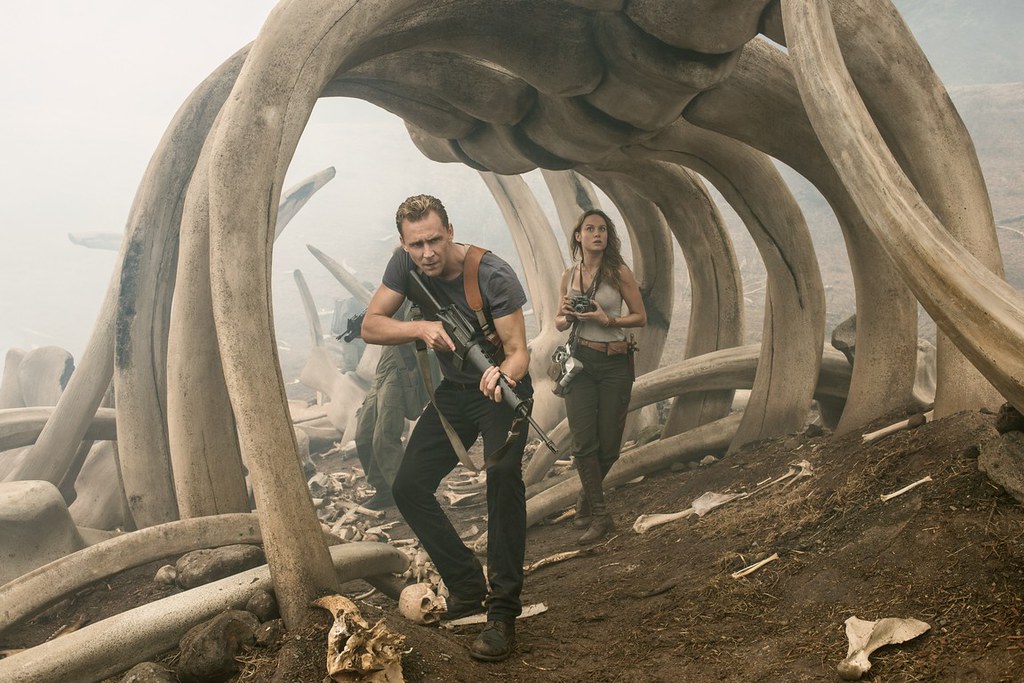 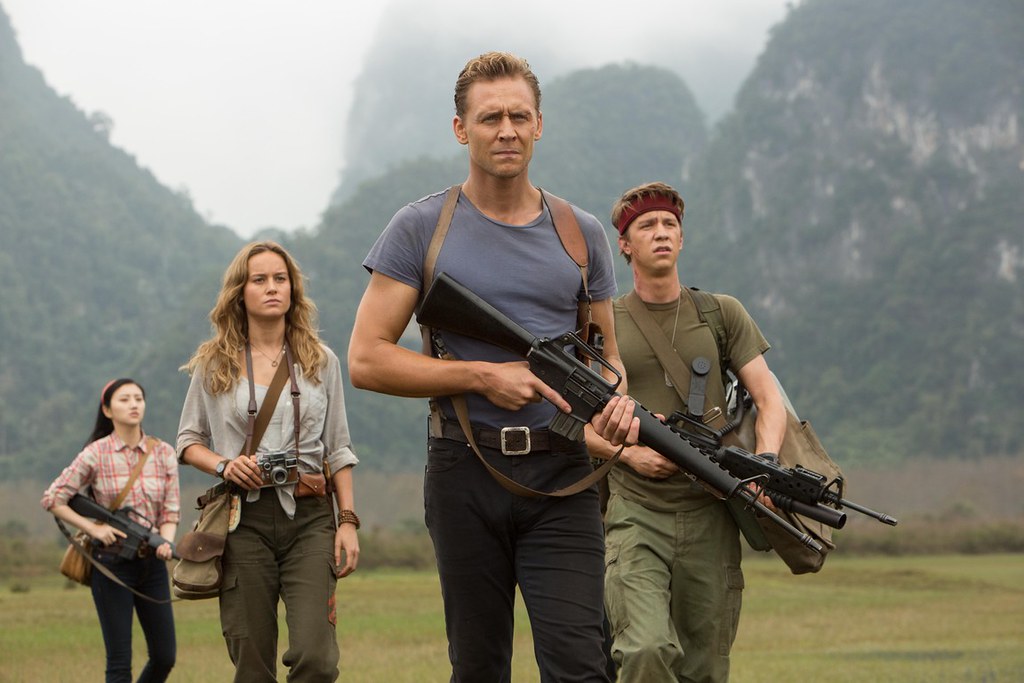 When I decided to watch Kong: Skull Island, it was because of Tom Hiddleston. I am sure by now, I have mentioned how much I love and adore him. Seeing him during my birthday is a sweet and exciting moment. Truly. He is so handsome and cool! I think his acting skill is something you mustn’t doubt. His past roles have proved that he is a great actor. After his role as Loki in Marvel‘s film and Sir Thomas Sharpe in Crimson Peak (2016) and other roles as well, I think you can say that Tom Hiddleston is a versatile actor that can play any role. Despite the fact that I love Tom Hiddleston’s performance in this film as Captain James Conrad, a former British Special Air Service—or in the film, they called him a tracker, I think his role is lesser than I have expected. I really wish James Conrad can show more of his skill. It must be really exciting to see that. Tom Hiddleston did his performance flawlessly, but the script writer didn’t write about him more than I wanted. Seeing that there are so many characters in the film and the main character is actually the Kong, I guess it’s not surprising. At any rate, James Conrad still played the lead role and Tom Hiddleston embodied that character perfectly.

As for the female lead, I am not saying I don’t like Naomi Watts’s character in King Kong but I prefer Brie Larson’s character as Mason Weaver in this film. I think Naomi Watts’s Ann Darrow was kind of exaggerating in character and therefore I don’t really like it. However, Mason Weaver is way cooler. Although the interaction between Mason Weaver and Kong is lacking than Ann Darrow and King Kong, I think it is enough. I don’t like the idea of Ann Darrow likes King Kong. Grew to fond him, okay, but loved? I don’t think so. I guess no wonder they called Ann Darrow has Stockholm syndrome. Their interaction is unique but I prefer Mason Weaver and Kong in this film, even though Mason Weaver didn’t take as many parts as Ann Darrow. Ann Darrow used to be the highlight of the film, whereas Mason Weaver in this film, not so much. Yes, she has her moments with Kong, but not as much as like Ann Darrow before. I don’t know whether it’s a good thing or a bad thing, but I kind of like it. It is enough and not too much. This time, James Conrad also has his moment with the giant ape as well. So it’s not all about the female. I also like the interaction between James Conrad and Mason Weaver. Their chemistry is nice but not exaggerating. Tom Hiddleston and Brie Larson can interact each other really well, making a very good chemistry. It’s not yet a love and romantic chemistry but they surely have their moments. I really hope that I can see both characters again in the future if there’s any sequel film about them or about Kong.

I think the giant ape in King Kong is cuter than the ape in Kong. The giant ape in Kong is way bigger but well, I found the looks of the prior giant ape is cuter, at least in my personal opinion. And of course, I like the ending of Kong: Skull Island better than King Kong. No matter what, King Kong has a sad ending after all. I did cry when I watched that film for the first time. But I am feeling very excited when I finished watching this film.

“An uncharted island. Let me list all the ways you’re gonna die: rain, heat, disease-carrying flies, and we haven’t started on the things that want to eat you alive.” – Captain James Conrad

Samuel L. Jackson is good at playing his characters in the films. He is also a versatile actor that can play any role. Whether it’s a good character or bad character. At this point, I am sure everyone already knows how great Samuel L. Jackson is. He also played an important role here but I can’t say it’s a good character or a bad character because it’ll spoil everything. The other actors also played their characters really good as well. Although, some characters that I thought would play some kind of important role, ended up not that important. Their scenes are not as many as I thought. I don’t mind it anyway since what I’ve been waiting for is actually Tom Hiddleston anyway. 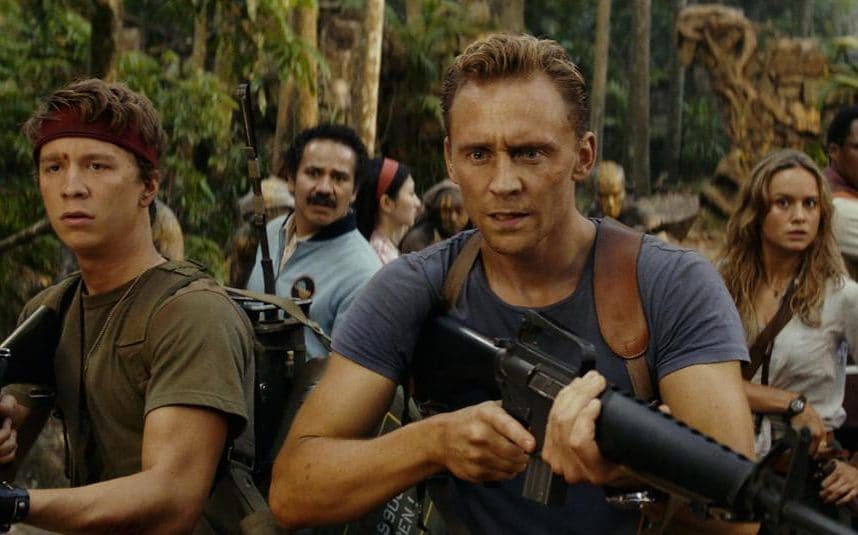 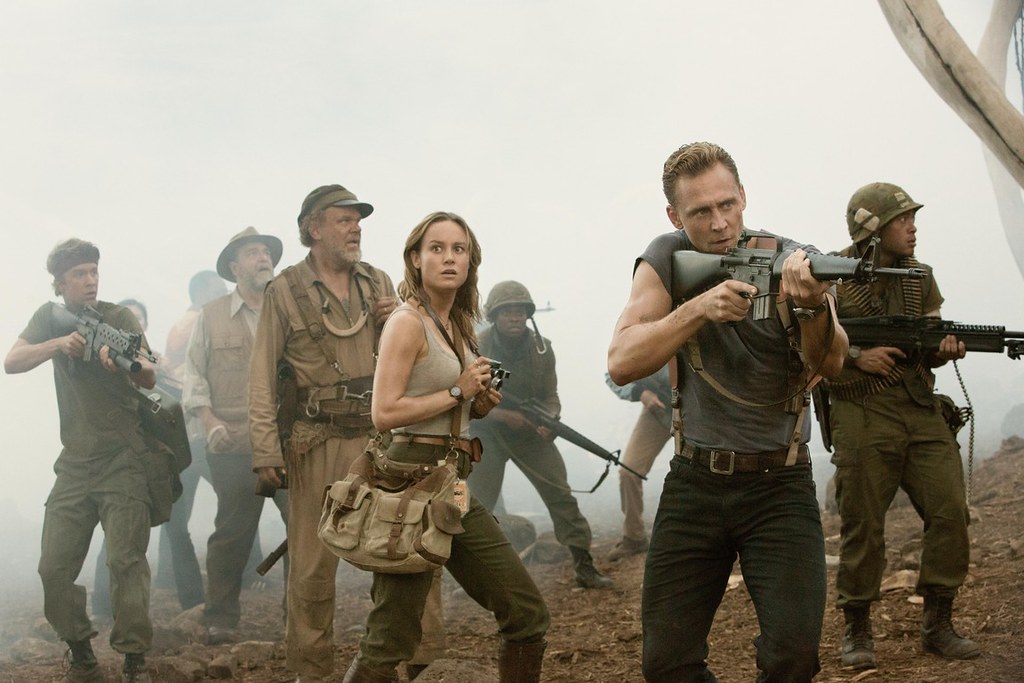 As for John C. Reilly, although I barely see his film before, I think his performance in this film is entertaining. He played the character of Hank Marlow, a soldier who has been on Skull Island since World War II. It’s a very long time to be stranded on an unknown island by himself. If I were him, it’s not wrong to think they I would never go out to see the rest of the world again, seeing that this Skull island is not just stranded but also hard to go to. John C. Reilly managed to play his character really well, combining a crazy, serious, and funny attitude. His attitude really explained that he has been alienated from the world for years. It’s not strange if he looked so strange. As for the other cast who played the soldiers and other team members who went to Skull Island, they managed to add more tension and more laugh in the story. They kept the story more entertaining too. All the cast have embodied their characters really well. Therefore, making Kong: Skull Island the perfect package of a good film.

The overall story is great. You don’t have to doubt it. This film is massive and exciting. The remaking is, in my opinion, successful. I am sure some will prefer the previous King Kong film. But I prefer Kong: Skull Island. I like the idea of an expedition to an uncharted island to find mysterious creatures. Yes, I prefer that than an expedition to find an island for the sake of a show. There are some funny moments as well, despite all the thrilling adventure. Those funny moments can make you laugh and entertain you even better. It’s not the kind of funny that will make you laugh out loud or your stomach hurts, but it definitely will make you at least smile or giggle. Anyway, don’t forget to wait until the end of the credit because there is a post credit scene in the end. It’s kind of long and definitely worth to wait.

All in all, Kong: Skull Island is a great film. I definitely didn’t expect this film to be this great. I love seeing Tom Hiddleston here. Everything about this film is huge and massive. The story itself is also an adventure on its own and very exciting indeed. This film is great indeed and definitely worth your time to watch, even better if you can watch it in IMAX 3D.