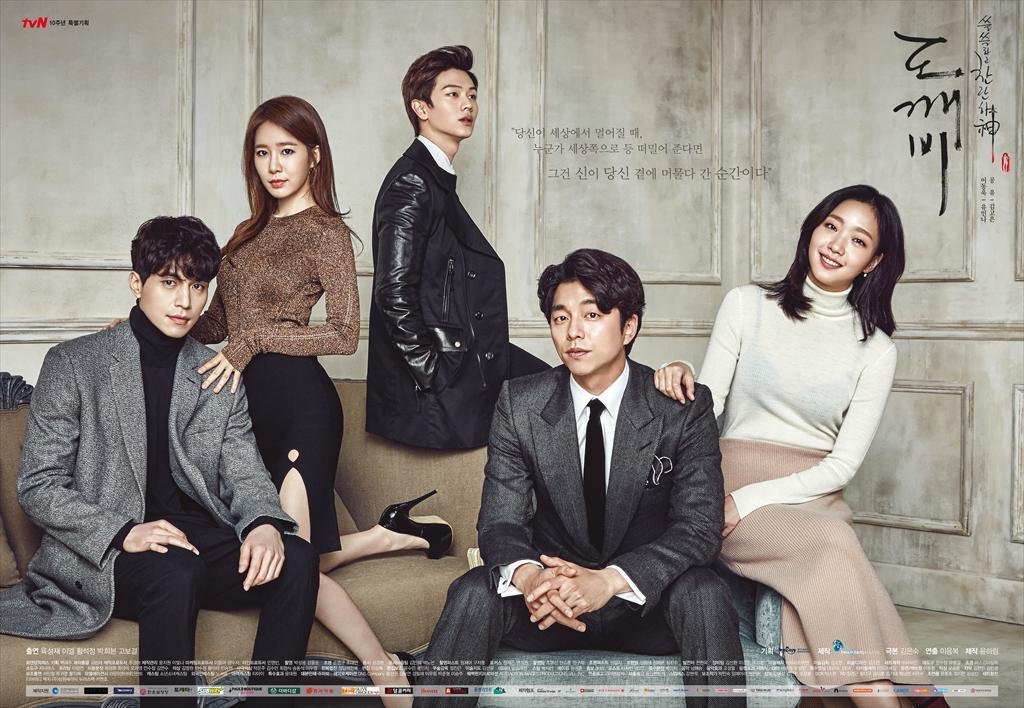 In ancient times, Kim Shin (Gong Yoo) is an unbeatable general in wars, but the young King (Kim Min-Jae) is jealous of Kim Shin and kills him. Kim Shin becomes Dokkaebi (Goblin), possessing an immortal life. At first, he thinks that he is blessed, but he realises that he is cursed.

In the present day, Kim Shin has waited 900 years for a human bride to end his immortal life. He lives with an amnesiac grim reaper (Lee Dong-Wook) who is in charge of taking deceased souls. One day, Kim Shin meets a girl, Ji Eun-Tak (Kim Go-Eun), who has a special ability to see ghosts and is destined to be his bride and return him to ashes.

I have known Gong Yoo before but never really watch his dramas. His latest film is Train to Busan (2016) and from what I heard, it was very popular because it’s pretty scary for a zombie film. I don’t know the whole story because I am not a fan of zombie films, really. Ever since that film, I think his popularity has risen up. I don’t know exactly why but I believe because his acting is great. Prove in Goblin, Gong Yoo managed to portray the character of Kim Shin, an immortal goblin, really really well. He could look very serious at one time and ridiculous at other times. The way he walked, talked, laughed, smile, or even express himself can be serious and ridiculous alternately. Gong Yoo really is a great actor. I have to admit, I like him whenever he smiles. His sweet sad smile, cheerful smile, and silly smile are all very attractive.

At first, I was so confused with the term ‘goblin’ here, because the goblin that I have always known is not like in this Korean drama. Not that I literally know of one, of course. What I meant was the goblin that I’ve known from other books, films, and TV series. Those goblins love gold. In a way, the goblin this drama also mentioned about his love of gold but not like the usual goblins that I know of. If you’ve seen Harry Potter films or read the books, or if you’ve watched Merlin (2008-2012), I am pretty sure you know which type of goblin that I’m talking about. And believe me, they are not like Gong Yoo, a handsome, human-like. Nope, definitely far from that.

I don’t know anything about Korean mythology or folklore but I am pretty excited about the goblin in this TV series. How can I not when the goblin in this Korean drama looks so cool. He can teleport across continents through any door to any other door that he is familiar with, freeze time, look into the future, and save lives. Not to mention he is also handsome, funny, and powerful. He can make it rain when he is sad, bloom the flowers when is happy, make thunder when he is mad, and so on. He can teleport in short distance too. Being immortal is kind of a plus point too. That is why I love the idea of this drama. Although I never watched fantasy Korean drama, I mean a full fantasy like Goblin, I am happy to say that I am glad I decided to watch this. Goblin is not disappointing. It’s pretty much very interesting, funny, and enjoyable to watch.

Anyway, Gong Yoo is surely a great actor. He didn’t hesitate to look silly and he certainly can look very cool at other times. I think I understand why people who have watched Goblin will like him. He embodied the character of the immortal goblin really really well. I certainly laughed a lot whenever he’s doing those silly things and smile whenever he’s doing something sweet and cool. He can express all of his emotions really well. Whether he’s smiling, laughing, crying, or even when he’s serious. It was all portrayed very well. He definitely has his own charm and charisma. 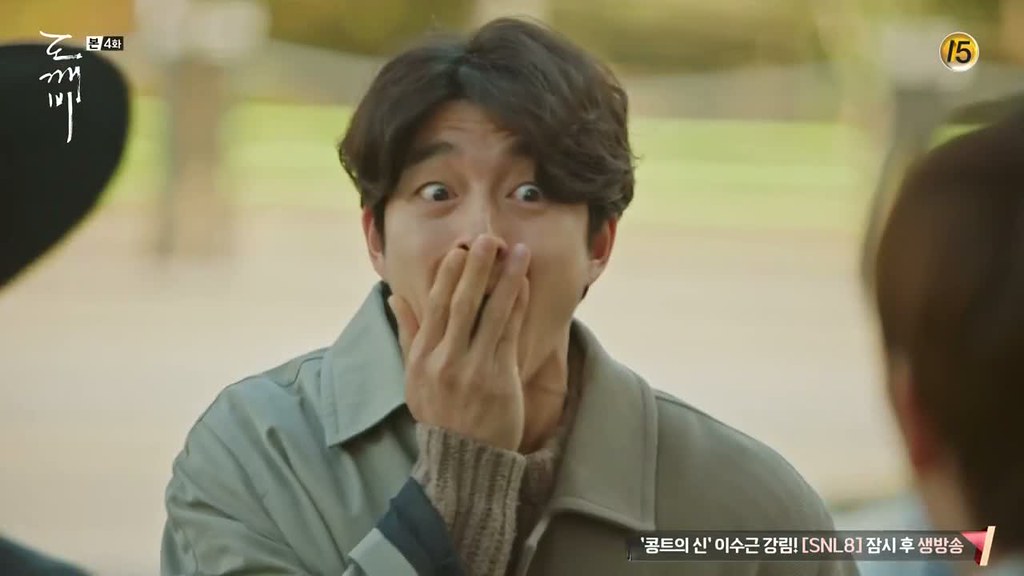 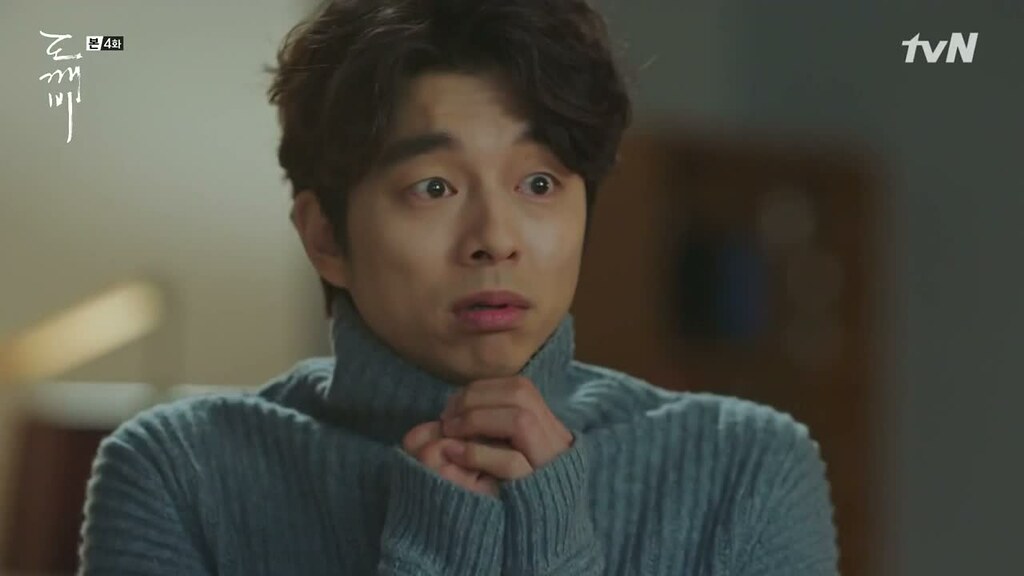 “A part of me is relieved to meet the end of this eternity but it’s not that bad as a part of me still wants to live.” – Kim Shin 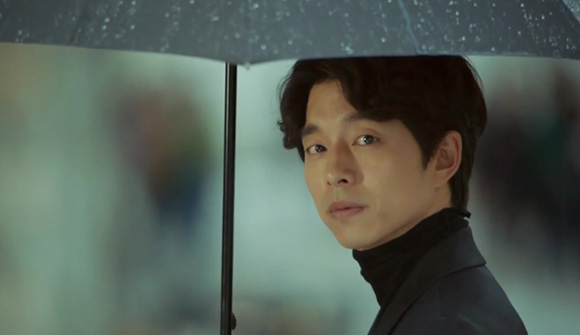 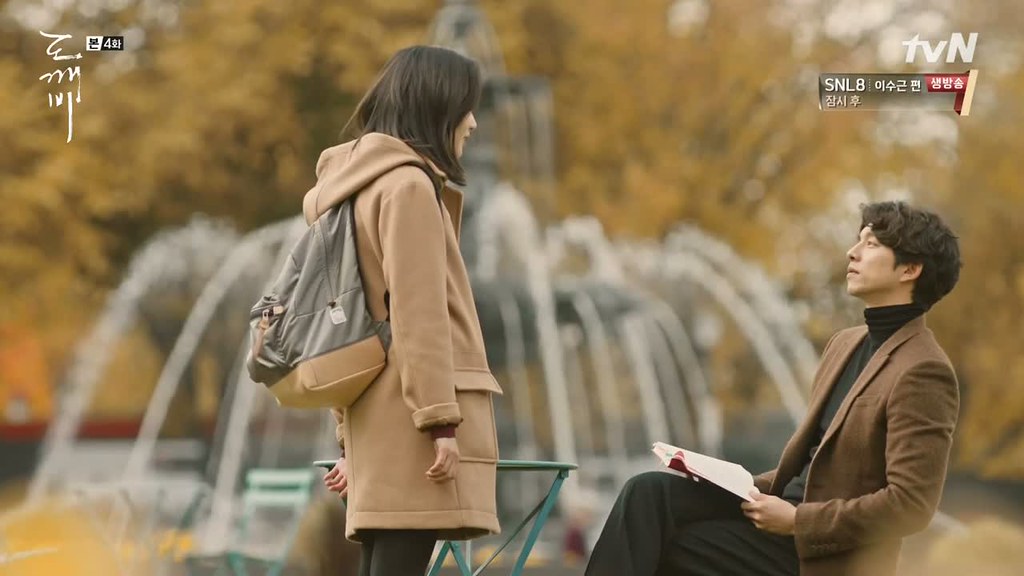 The attraction between Gong Yoo’s character, Kim Shin, towards Kim Go-Eun’s character, Ji Eun-Tak, is definitely something you won’t miss. Kim Shin surely loves Ji Eun-Tak. Unfortunately, I don’t see a good chemistry between them. Kim Go-Eun somehow failed to show the love that she was supposed to give. But Kim Shin and Ji Eun-Tak certainly have a unique relationship. I like how Ji Eun-Tak can call Kim Shin just by blowing a fire. It can be very funny the time is not right for Kim Shin to be called to. However, they failed to be as sweet as Oh Soo and Oh Young in That Winter, the Wind Blows (2013). I think Gong Yoo certainly showed a better emotion than Kim Go-Eun. If I have to be honest, I don’t really like Kim Go-Eun’s acting in Goblin. Somehow she lacks the emotion and the chemistry with Gong Yoo’s character, though not entirely but it still lacks. I sometimes even found it awkward to see Ji Eun-Tak’s interaction with Kim Shin. I don’t think Kim Go-Eun is the right person in playing Ji Eun-Tak, because somehow she lacks the chemistry with her character and Gong Yoo’s character.

“Mass isn’t proportional to volume.
A girl as small as a violet, a girl who moves like a flower petal–is pulling me toward her with more force than her mass.
Just then, like Newton’s apple, I rolled toward her without stopping until I fell on her with a thump.
My heart keeps bouncing between the sky and the ground.
It was my first love.” – Kim Shin

Speaking of relationship, the love-hate bromance of two immortals is the highlight here. Ever since the beginning of Goblin, I have heard a lot of the bromance between the goblin and a grim reaper, who portrayed by Lee Dong-Wook. I have watched two Korean dramas that played by Lee Dong-Wook before and both characters he portrayed were very different. That is why I don’t doubt he pulled the character of the grim reaper off. He can be serious and ridiculous alternately. After all, he has become one of my favourite actors for a reason. The grim reaper in Goblin is like many grim reapers you’ve known and yet they are very different as well. They still in charge whenever there are dead people. A grim reaper usually illustrated as frightening. Though there are some stories that portrayed them otherwise, like in anime of Bleach or Full Moon wo Sagashite or 07-Ghost, but mostly they are frightening and have a bad reputation. However, here in Goblin, Lee Dong-Wook’s character is portrayed as a funny grim reaper yet he can be very serious when the time is right, especially when he is doing his job.

The relationship between the grim reaper and Ji Eun-Tak can also be very interesting at some points too. They have definitely had their funny moments as well. But the handsome immortals really stole the spotlight. There is no doubt that both actors are handsome and portraying immortals really make them twice cooler. Their bromance moments are something you’ll be waiting for. 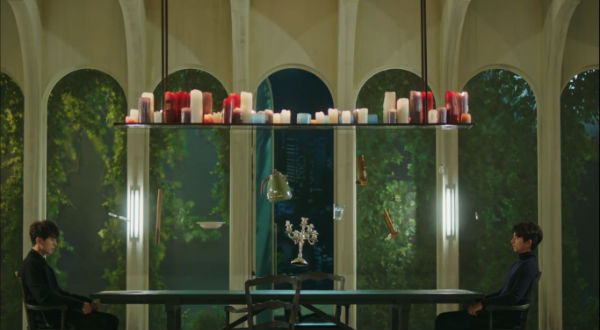 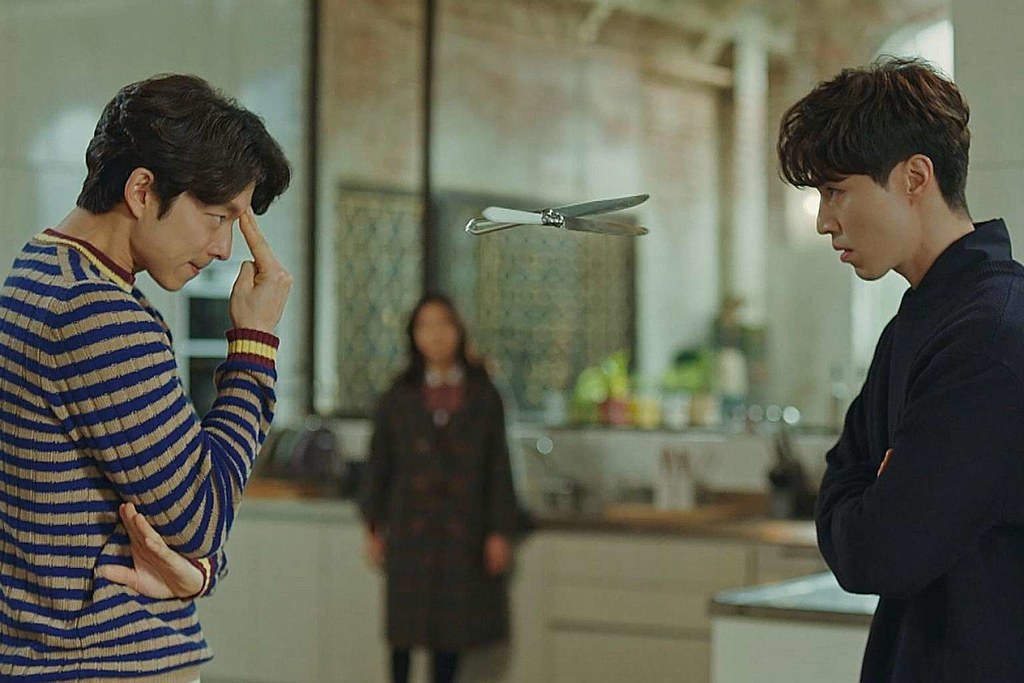 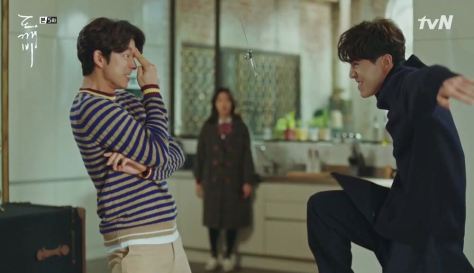 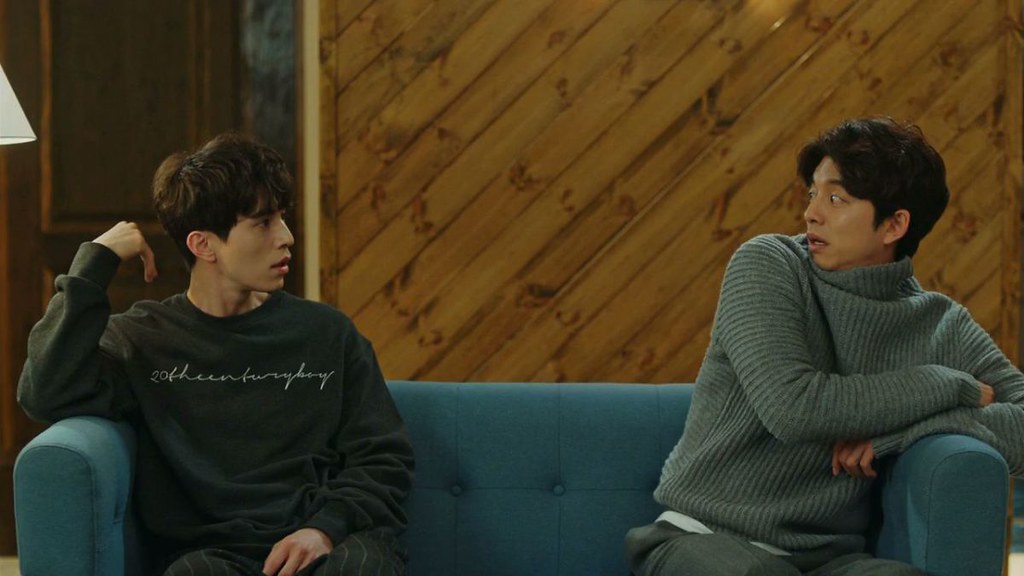 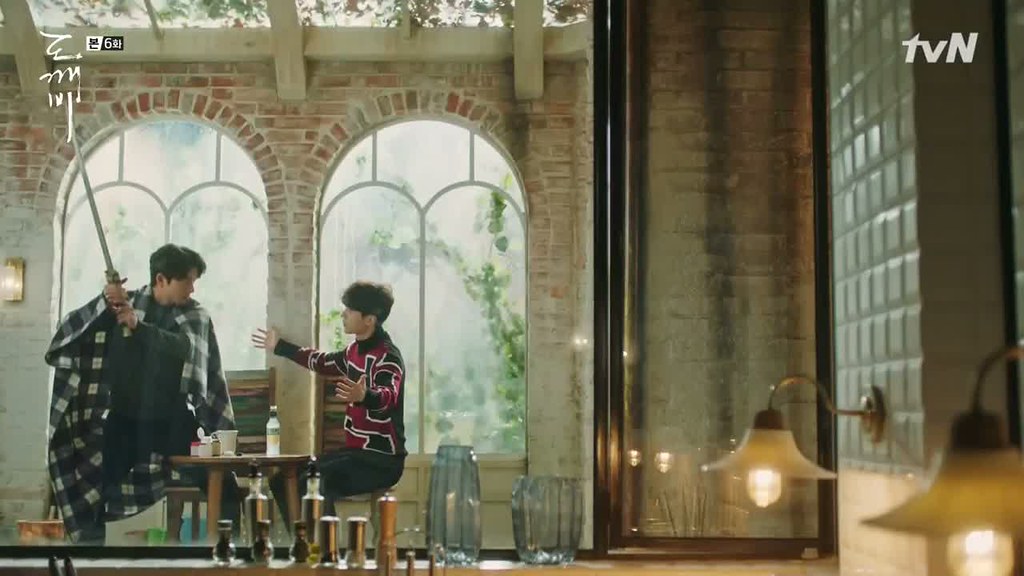 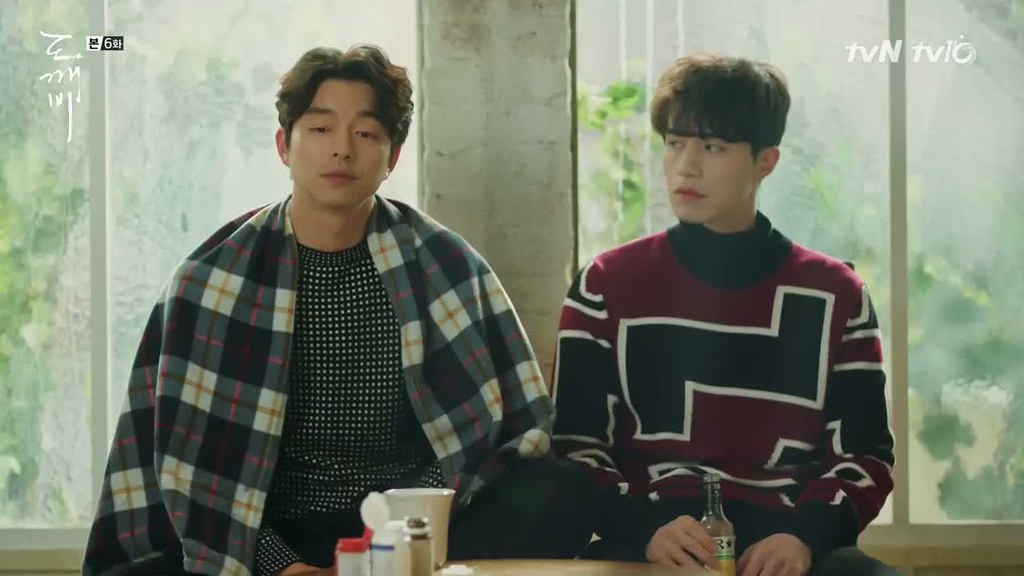 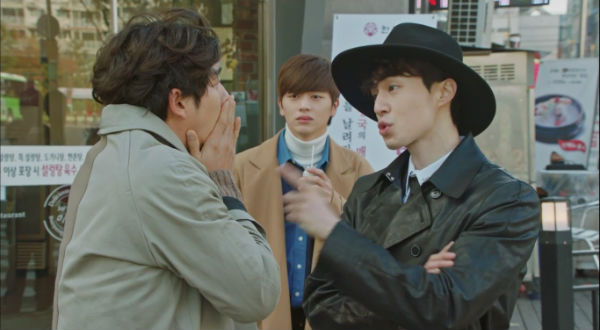 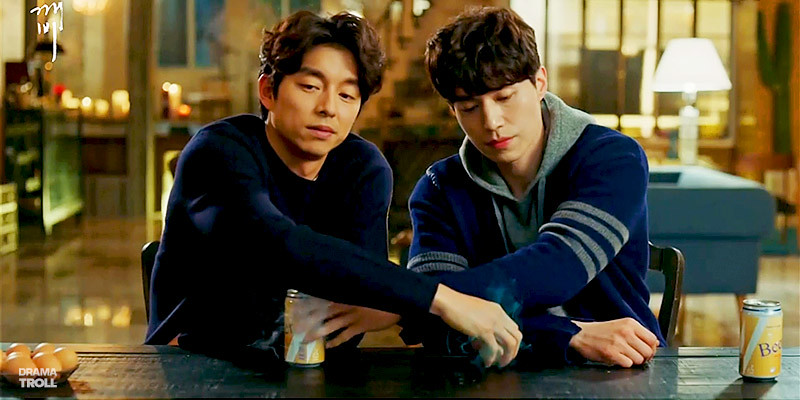 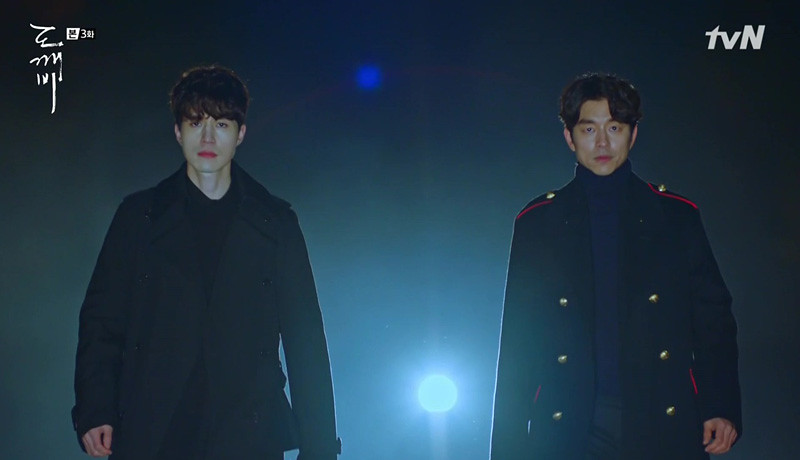 What I like about Goblin is the fact that each character has a story of their own. I also like the relationship between the grim reaper and Sunny. Their chemistry even look better than Kim Shin and Ji Eun-Tak, but Kim Shin and Ji Eun-Tak were funnier together. I can see how the grim reaper and Sunny love each other and I can see how Kim Shin loves Ji Eun-Tak. I can see and feel their chemistry and love. However, I just don’t see, let alone feel, Ji Eun-Tak loves Kim-Shin. The attractions between all four main characters are interesting to watch. They can be very funny together as well. Even the character of Yoo Deok-Hwa here can also make you laugh. He is the grandson of the Yoo family, a family who has served and protected the goblin for many generations. I know Goblin is not a comedy-drama, but it definitely has a lot of funny moments through all the episodes. Mostly, perhaps, because of the goblin and the grim reaper. The soundtrack songs even support all the scenes, whether it’s sweet or funny or serious, the songs fit them all.

There are many favourite scenes in this Korean drama. The funny moments, the sweet moments, the bromance moments, many of them that can make me laugh and smile. Another scene that I really like in Goblin is when Kim Shin saved Ji Eun-Tak. I don’t know why, but Gong Yoo as Kim Shin looks very cool there. I guess I like heroic and sweet scenes after all. Plus I love fantasy, that’s why to see something like this can make me smile. In The K2 (2016), the character of K2 is heroic enough to protect Anna. But K2 is a human with special fighting skills. However, Kim Shin is much more than that. He is an immortal with supernatural power and that is why Kim Shin is way cooler than normal humans. Even when he fights like normal humans—by using some kind of stick or sword—Kim Shin looks really cool.

Like many other Korean dramas that I have watched, I also have some things that I don’t like about the Goblin. Again, it is related to the ending. Although it is not as disappointing as Remember: War of the Son or IRIS (2009) or IRIS II: New Generation (2013), I am still not satisfied with it. There’s something about the ending that I don’t like. I don’t want to tell you what because it will spoil everything. However, I can understand why they chose that kind of ending. So, I don’t know. I am bit dilemma here about whether the ending is good or adequate. But definitely, the ending is not that bad. I am also a bit confused with one character in Goblin, at least until I read about her on the internet. They didn’t exactly tell anything about her and that is why it’s confusing.

Despite the ending, I think Goblin is a very good Korean drama. Throughout the series, Goblin has really entertained me very much. I definitely laughed a lot because of it. I like Gong Yoo in this Korean drama. I think he can be very charismatic, cool, and yet funny at the same time. And I always love Lee Dong-Wook since he played in My Girl (2005-2006) and later on in Hotel King (2014) which both were played alongside Lee Da-Hae. There is no doubt that Lee Dong-Wook is very handsome. The love affair between the characters is sweet and cute.

All in all, I really like Goblin: The Lonely and Great God. I think this Korean drama is funny and very much entertaining. The overall story is very interesting and since I love fantasy, I really love the idea. I think I get it now why Goblin is popular and the ratings are high. Because Goblin indeed has an overall good story and very much exciting and entertaining. It is strange, unique, yet beautiful. The only downfall is the last few episodes and the chemistry between Kim Shin and Ji Eun-Tak. However, overall, Goblin is a good drama.