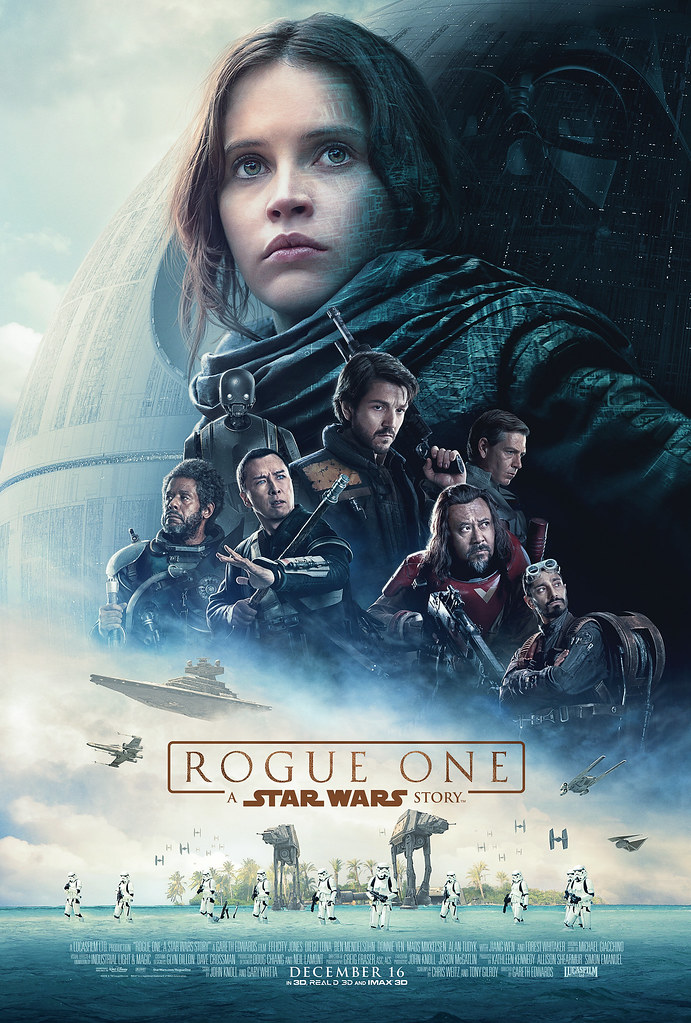 In a time of conflict, a group of unlikely heroes band together on a mission to steal the plans to the Death Star, the Empire’s ultimate weapon of destruction. This key event in the Star Wars timeline brings together ordinary people who choose to do extraordinary things, and in doing so, become part of something greater than themselves.

When I first heard Rogue One: A Star Wars Story, I have no idea what this film is about and have no clue why it was made. I only knew about the plot summary a few days before I watched it last week. So basically, Rogue One is chronologically set in between Star Wars: Episode III – Revenge of the Sith (2005) and Star Wars: Episode IV – A New Hope (1977). So instead of saying Rogue One is Star Wars 8, it’s more of Star Wars 3.5. And I have to say this film is better than Star Wars: Episode VII – The Force Awakens (2015). Honestly, like I’ve said before, The Force Awakens is too similar to A New Hope and that made me can guess the overall plot story. However, with Rogue One, although I can guess how the end would turn up, the overall story is pretty much new and interesting to see.

I can understand if people kind of annoyed with the ending. Surely if you have watched A New Hope, you won’t get confused or even annoyed with the ending of Rogue One. I think the ending is rather fitting. Rogue One has definitely given us the clear story of how A New Hope is started. How the Rebel Alliance was built and how they knew about the Empire’s weapon, Death Star. It was all explained the Rogue One and therefore, I think Rogue One managed to fill us the gap and answered all those questions for us. I think it’s a smart choice to make this film. I am pretty sure a Star Wars fan will love this film.

Rogue One has a whole new cast. A new cast here means new characters. It’s great to see Felicity Jones again. I think she’s needed to be taken into account. After all, she’s an Oscar nominee. That’s something, isn’t it? She is very good in The Theory of Everything (2014). And this year, I have also seen her film, Inferno (2016). In Rogue One, she also played the main lead character, Jyn Erso. She is very good at portraying her character. Her fighting scenes look awesome as well, with all the guns and the laser beam and all. I am sure it wasn’t easy to do but Felicity Jones did it very well. As for Diego Luna, I had no idea he was a Mexican until today. Come on. There’s no trace of his Mexican accent in the film. How should I know? So, I have to admit that Diego Luna is a good actor.

“We have hope. Rebellions are built on hope!” – Jyn Arso

I am surprised to see Donnie Yen has joined the cast. It’s a good surprise. I am quite excited about it actually. He has done tonnes of action films and they all include martial arts in it. To see him back in action again in Rogue One is just impressive. He was 53 years old but still stunning in doing those stunts. Plus, he added some laugh too. He played the character of Chirrut Îmwe, a blind warrior who believed in the Force. As for Ben Mendelsohn, he is really good at playing the villain. Plus, we’ve got to see a glimpse of Darth Vader—or perhaps more than a glimpse. Darth Vader is one of my favourite villains and I am sure everyone feels the same way as well. He’s such an epic character aside from Master Yoda anyway. And like any other Star Wars films, in Rogue One, there’s also an iconic robot. This time his name was K-2SO and very much funny. Kind of reminds me with C-3PO. I am sure everyone will like this new robot. He added some fresh and laugh in the film.

The overall story is indeed very good and even though I kind of know how this film would end, I still think it’s better than The Force Awakens somehow. Perhaps the beginning is rather slow but after awhile, the film began to become more exciting and thrilling. The battle scenes are still felt so Star Wars but I’m sure people will think the original Star Wars films are better. Of course, the original films are always better, right? However, I really feel this film is what we need especially when you watched Star Wars in the right order. By means, from episode one to six. Yes, in that particular order, not the other way around. I like Star Wars, though I am not a fan so I don’t know what a real Star Wars fan would think about this film but I think if you’re a fan, you will like Rogue One. It is worth to watch.

“I’m one with the Force, and the Force is with me.” – Chirrut Îmwe

So in summary, I like Rogue One: A Star Wars Story. I think this film really fits the timeline and answers all the unanswered questions or at least the questions that I’ve been asking after watching Revenge of the Sith and then A New Hope. The film feels right to me. I am not a big fan of Star Wars, but I am not going to lie that I don’t like the franchise because I really do. And I really like Rogue One. I think the film is entertaining, enjoyable, and worth to watch. In my opinion, this film is better than The Force Awakens, which basically have tonnes of similarities with A New Hope. Whereas Rogue One is a whole new story that connects Revenge of the Sith and A New Hope. A very fitting film in Star Wars timeline universe.