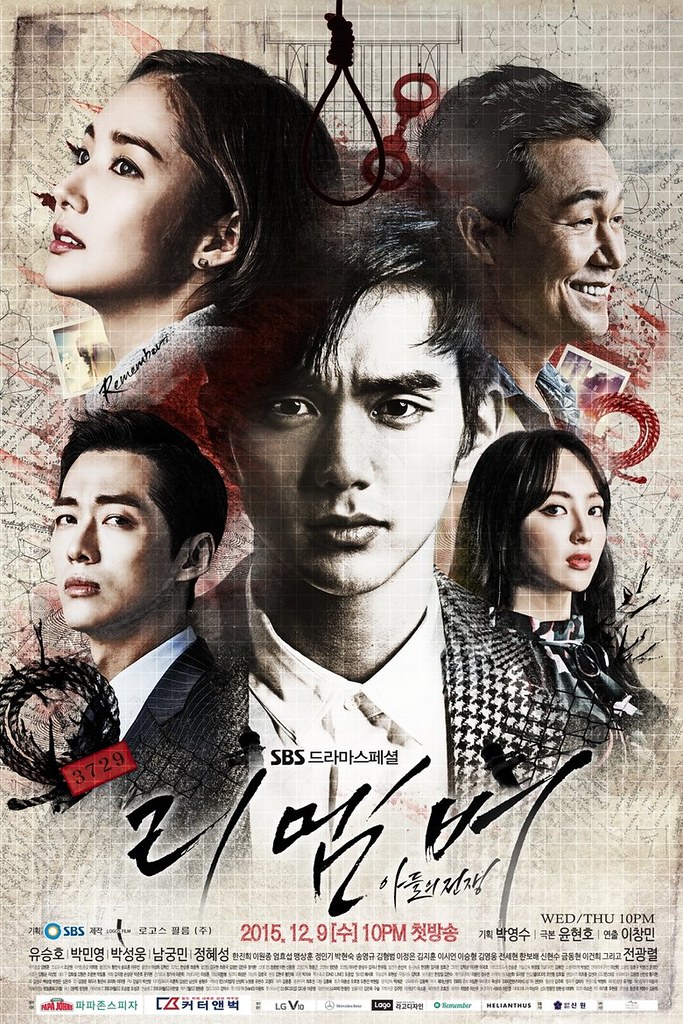 Seo Jin-Woo has a special condition called Hyperthymesia which allows him to remember almost every day in perfect detail. While his father, Seo Jae-Hyuk on the other hand, developed an Alzheimer’s disease, making him lose his memories. When Seo Jae-Hyuk was wrongfully convicted of murder, Jin-Woo vows to prove the innocence of his father. Four years later, Jin-Woo becomes a lawyer to put the real criminal behind bars but bribery, corruption, and betrayals would not give him an easy road to justice.

Remember: War of the Son is another Korean drama that my sister told me that I would get interested with. She is right. I pretty much like it nearly throughout the series. I think this is the third Korean drama about attorneys and prosecutors that I watched. The first one being I Can Hear Your Voice (2013) and the second one is Prosecutor Princess (2010). I found this kind of TV series pretty interesting, even though to be honest, I don’t particularly understand their laws.

Remember: War of the Son is purely about law and attorneys and prosecutors and criminals and homicide everything in between. If you’re hoping for a romance, I suggest you give up watching this Korean drama. My sister surely does when I said thus. To tell you the truth, I was expecting some romance. I’ve said it before that The K2 (2016) has not had the romance scenes as much as I want. However, the chemistry between Ji Chang-Wook and Im Yoon-Ah is so sweet and they are so good together, therefore I don’t mind by a number of romance scenes that weren’t as many as other romance dramas. On the other hand, Remember: War of the Son is definitely passed the beyond that minimum bar. There is no romance at all! Even if there is romance, it is only shown up nearly at the end of the series and there’s nothing so special about it. Quote disappointing I must say. But then again, Remember: War of the Son is not a romance drama, therefore, it is understandable. So in term of romance, this Korean drama is not the right pick. Don’t expect sweet romance story like the usual Korean dramas provide. If you expect something like That Winter, the Wind Blows (2013), I think you should forget the idea since it will never happen. There is barely any romance story in Remember: War of the Son. However, if you want to watch something thrilling and exciting involving laws and criminals, I think Remember: War of the Son is the right pick.

“In-Ah, based on what I’ve experienced in life so far, everything becomes clear when the time is right. People talk nonsense and make guesses but things are revealed naturally in time.” – In-Ah’s Father

As for the actors and actresses, I think Yoo Seung-Ho is a great actor. He can change from a naive high school boy into a mature-looking attorney. I swear that I’ve seen him before Remember: War of the Son, but I look up to him, I never watch any of his TV series nor his films before. Or perhaps I accidentally saw him when my sister was watching one of his drama. I really have no idea. Or maybe he looks like someone else. To tell you the truth, I often say something like this and finally make my sister grew tired of me. I often say that this or that actor or actress looks like another actor or actress, which my sister denied strongly. She said it was just imagination. I guess so? I don’t know. Anyway, I must praise Yoo Seung-Ho’s acting skills in this film. Even though there’s no fighting scene or anything dangerous, still, I think he is a good actor. I like the way he brought his character. I kind of envy with his character, though. He has a photographic memory, for heaven’s sake. Who doesn’t want that? I’m sure it’s very useful during exams. 😂😂 However, the photographic memory seems rather impossible, to begin with, but it’s interesting. The one from You’re All Surrounded (2014) is pretty different because in Remember: War of the Son, the photographic memory is more precise. Both of them are like Sherlock Holmes in Sherlock TV series, but they took a different angle kind of photographic memory. However, if both characters in Remember: War of the Son and You’re All Surrounded combined together, they certainly will make the character of Sherlock Holmes. In this drama, Seo Jin-Woo (Yo Seung-Ho’s character) can remember every small detail, rewind them in his memory. Quite remind me with Minami Megumi from Detective School Q too. It’s an anime and a manga about detectives or future detectives. It’s a good anime that involves, of course, criminals, suicide cases, and such. And in Detective School Q, Megumi has a photographic memory that allows her to remember every little detail that she sees even just for a glimpse. Just like Seo Jin-Woo in this Korean drama. Interesting, right? I don’t know if photographic memory does work that way but if it is, it is bloody awesome. But of course, there’s always a downfall to having such talent. Sometimes, remembering everything in details can be so frustrating and not pleasant at all.

Aside from Yo Seung-Ho, Park Sung-Woong’s acting skill also must not be underestimated. As well as the other actors and actresses. Their expressions and actings are really good and very natural. I think Namkoong Min is a great actor. After The Girl Who Sees Smells (2013) and a small role in Doctors (2016), you can really see that he can play the good and the bad guy just the same. He can look so hateful and in other stories, he can look very pitiful. It shows that Namkoong Min is a great actor who can not just play the antagonist, but also the protagonist. This time, he played a hateful antagonist. His expression is astonishing. You’ll hate his character right away. I kind of like it when Namkoong Min smiles even though in this Korean drama, he rarely smiles the genuine smile. But he often smiles in Doctors and The Girl Who Sees Smells.

As always, Korean dramas never do anything half way. The places, the costume, everything is so real. Although nothing special about the settings, I still think they’ve done a great job. Yes, they did not shoot in Japan or Hungary like in IRIS, or shoot in Greek like in Descendants of the Sun (2016), but I always think Korean dramas have always made everything in totality, never half way.

In truth, I do expect more side criminal cases but the main case is pretty long and unsolvable. At some point, I kind of bored because the problem keeps on coming even though the previous problems has yet to be solved. Like I said, the main character is pretty unlucky nearly all the time. Nonetheless, the overall story can still be enjoyed. The actors and actresses are also very good in portraying their characters. Unfortunately, like many others before this series, I don’t like the ending. This Korean drama also made the ending too quick. Thinking that there are so many conflicts from the beginning, surely we want the ending to be as clear as possible. Yet they decided to make it quick and even uncertain, just like The Innocent Man and Yong-Pal (2015). Some questions are left unanswered. I don’t know if that’s they wanted to give us but I certainly am not satisfied at all.

Therefore, considering every angle, I decided to give Remember: War of the Son 7.5 out of 10 stars.