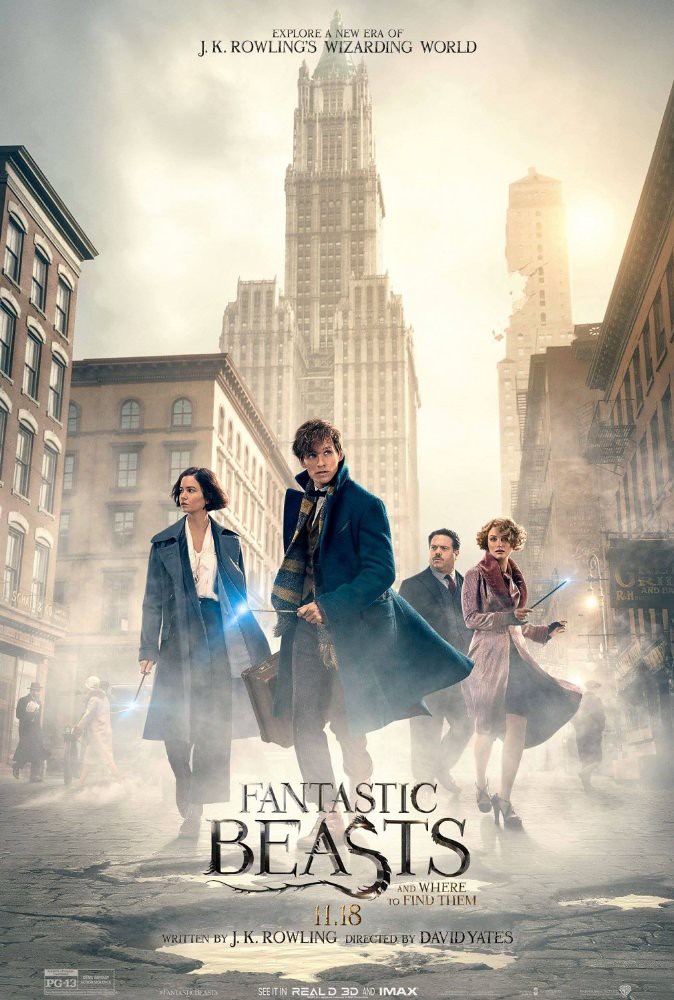 The year is 1926, and Newt Scamander (Eddie Redmayne) has just completed a global excursion to find and document an extraordinary array of magical creatures. Arriving in New York for a brief stopover, he might have come and gone without incident, were it not for a No-Maj (American for Muggle) named Jacob, a misplaced magical case, and the escape of some of Newt’s fantastic beasts, which could spell trouble for both the wizarding and No-Maj worlds.

I can’t believe Fantastic Beasts and Where to Find Them comes early in Indonesia! Yes, I have watched it despite the world’s—or basically, USA and UK—release date of this film is on 18 November 2016, which is tomorrow. So I am so excited when I got to watch it yesterday! Right on the day it was released in Indonesia. This is the second film this month after Doctor Strange (2016) featuring my favourite actors. This time, not just one, but two! Yes, it is Eddie Redmayne and Johnny Depp in the film, people! I am super excited. I was already so excited when they said Eddie Redmayne is going to be Newt Scamander, who is in fact, the main character of Fantastic Beasts and Where to Find Them. He is the ‘writer’ of the book which is supposed to release afterwards and become Harry Potter’s textbook. Only recently did I know Johnny Depp has joined the cast too! Super awesome and exciting! 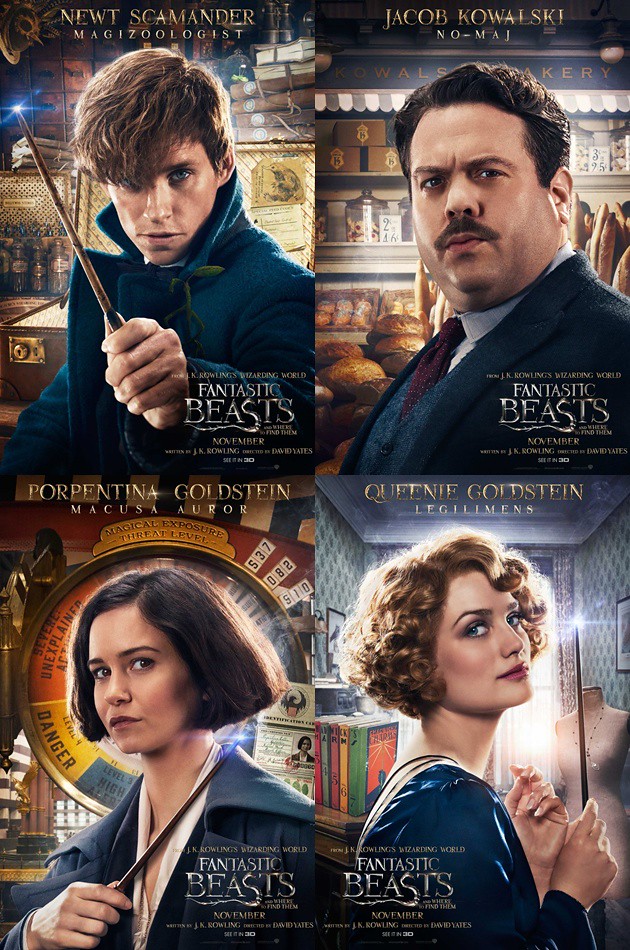 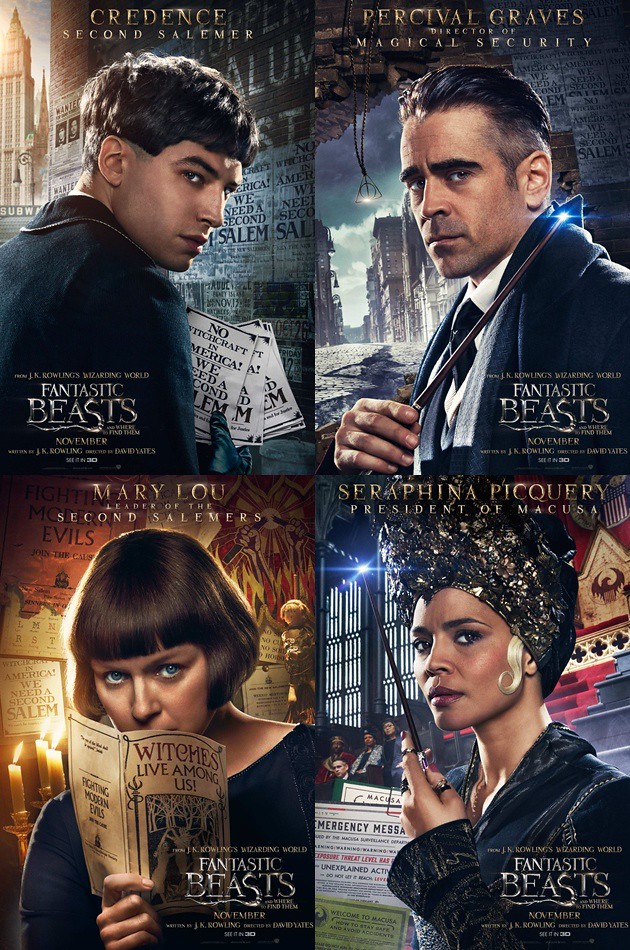 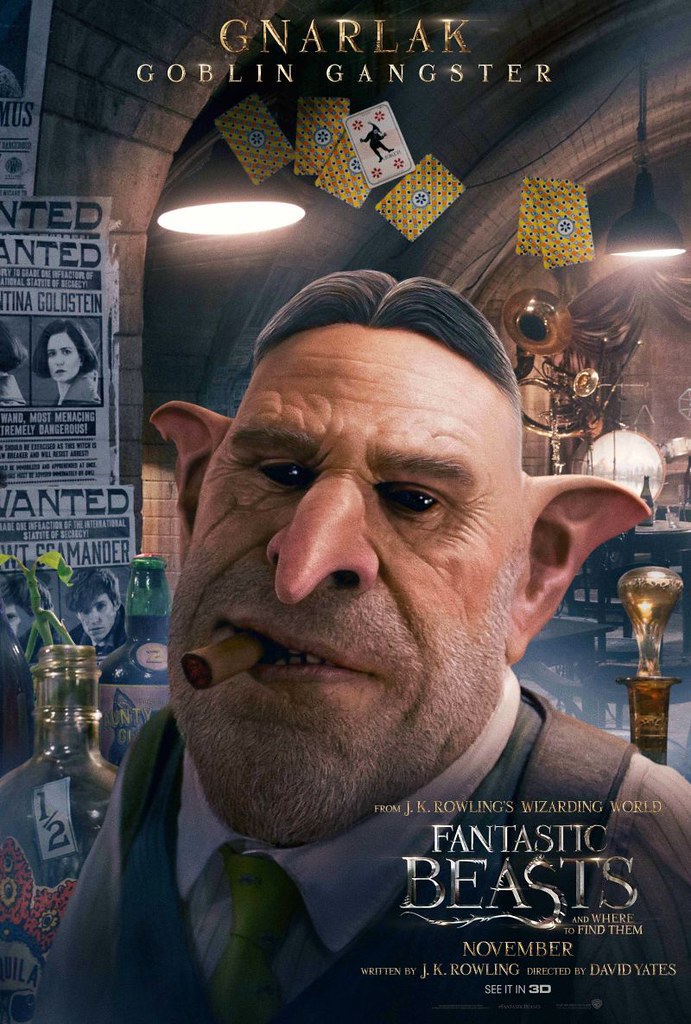 It is funny to think that I’ve watched the episode of Graham Norton Show where Eddie Redmayne was one of the guests that day. He said he always wants to be a part of major films like Harry Potter and The Lord of the Rings. He even tried an audition to be Bilbo Baggins in The Hobbit franchise, unfortunately, he never received any callback. He was also pretty upset when he couldn’t join the Harry Potter franchise. I guess that’s not all unfortunate after all since now he has joined a new franchise—that I believe will be massive as well—as the main character too, instead of being a side character. So, his ‘moaning’ in the Graham Norton Show is being heard! Well, I don’t know if it’s true, but Eddie Redmayne looked really excited during Graham Norton Show two weeks ago and thanking Graham because perhaps J. K. Rowling did hear him from the show.

Anyway, let’s get back on the film. From the beginning, I didn’t know what to expect because when I read Fantastic Beasts and Where to Find Them, the textbook one, there’s no story in it. Not at all. It is indeed a school textbook. So I really have no clue! I am so excited that the book of the film is going to be released tomorrow—and yes, I’ve pre-ordered it from months ago. So, if you watch Fantastic Beasts and Where to Find Them, you’ll see how it is so J. K. Rowling yet so different from Harry Potter. Seriously, J. K. Rowling can always amaze her fans. The film is really jaw-dropping! The magic is just massive! Even more massive than Harry Potter. Perhaps because the characters are all adults, so their magic is basically greater and cooler than Harry Potter who basically only a teenager who was still studying magic in school. Seeing those kinds of magic is really awesome. It is surreal and doesn’t exist in real world, but it doesn’t hurt to believe in magic sometimes, right? Like Harry Potter, the magic looks pretty real to me though perhaps some scenes look like they’ve been made by CGI effect, I think I can overlook those scenes since 98 percent of the magic looks so real to me. Some familiar spells are still there, of course. It’s nostalgic hearing those words—or spells—are being used again.

“You’re an interesting man, Mr. Scamander. Just like your suitcase, I think there’s more to you than meets the eye. Kicked out of Hogwarts for endangering human life with a beast, yet one of your teachers argued strongly against your expulsion. I wonder… what makes Albus Dumbledore so fond of you, Mr. Scamander?” – Percival Graves

Aside from Newt Scamander, the other character that invites us to laugh is Jacob Kowalski, played by Dan Fogler. He is a muggle, or in the film they called it as no-maj in America. Jacob Kowalski added some humour in Fantastic Beasts and Where to Find Them, although it is not a humour that can make your stomach hurts, it is still a humour that can make you laugh and enjoy the film. Dan Fogler really played his character in the film really well. He looks genuinely didn’t understand what bloody was happening around him. As for Katherine Waterston, she really played the role of Porpentina Goldstein really well. I mean, she looks so different from her role in Steve Jobs (2015). The chemistry between her and Eddie Redmayne is good. Although I don’t think much about it, then as the film went on, I think they made a good pair. 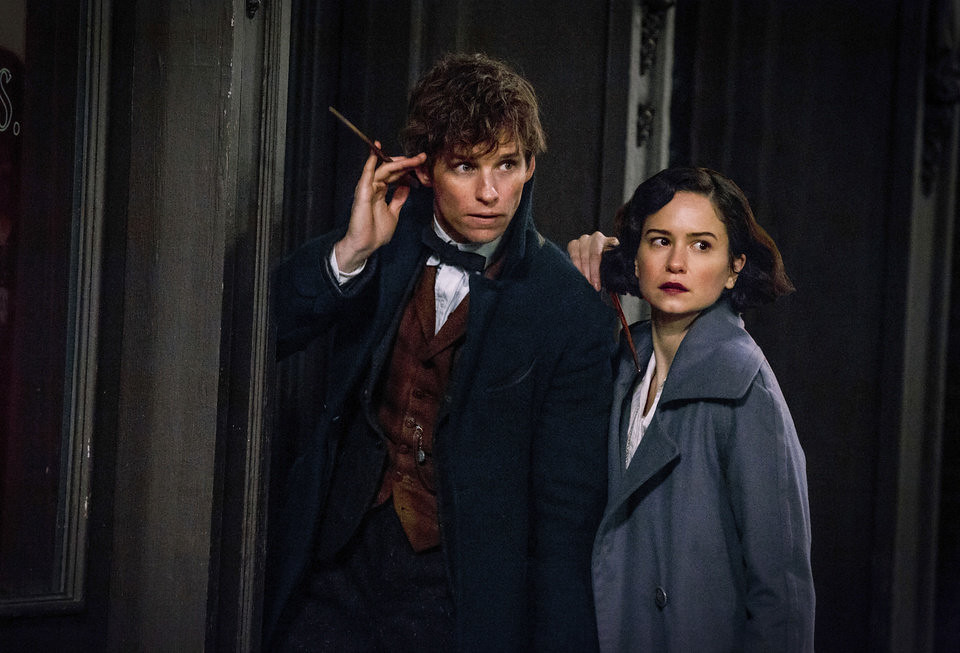 Although I love the setting in Harry Potter more because it took place in a school, particularly at Hogwarts, I still think the setting of Fantastic Beasts and Where to Find Them is not bad at all. It is indeed fascinating to see the 1920s of New York, especially the magic world surrounding it. I feel like even though it took place 70 years before Harry Potter, somehow the magic and the places look more modern and advanced. I guess, with the growing years, technology and design have become very advanced that they can make everything looks better. No big deal there. Fantastic Beasts and Where to Find Them can still manage to entertain us in so many ways. I am very sure you’re not going to regret watching this film. It is so Harry Potter yet so different at the same time. I really love it. I also love the clothes. It does feel like the 1920s clothes at some point.

As for the fantastic beasts, they are really fantastic! They look really real to me. It’s amazing how the CGI effect doesn’t look like one. I love the Niffler. It is super adorable! I am pretty sure it’s going to be the favourite of everyone. Seriously, it is super cute. It has a long snout similar to that of a platypus and a coat black fluffy fur. It also has a pouch on its belly which can hold so many things. What’s funnier is that the Niffler really attracted to shiny things. The Niffler surely invites everyone to laugh because of its action. Though other beasts also can be funny too, I think the Niffler really catches the attention of the audiences. Even though the Niffler is so bloody cute and adorable, the beast that I actually fell in love with is the Thunderbird. In Harry Potter, they have Phoenix and hippogriff, in Fantastic Beasts and Where to Find Them, they have Thunderbird, a very large bird that says still related to Phoenix. It can create storms as it flies and can sense danger. Pretty cool, isn’t it? However, every beast in this film is just awesome. I am really amazed by how J. K. Rowling can imagine these creatures and the animation team make her imaginations do come true in a great way. Super awesome! 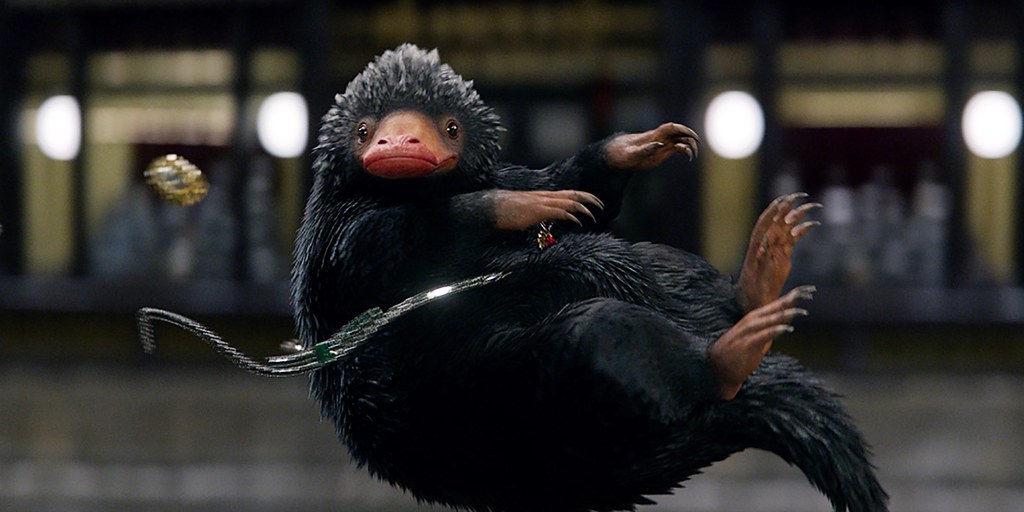 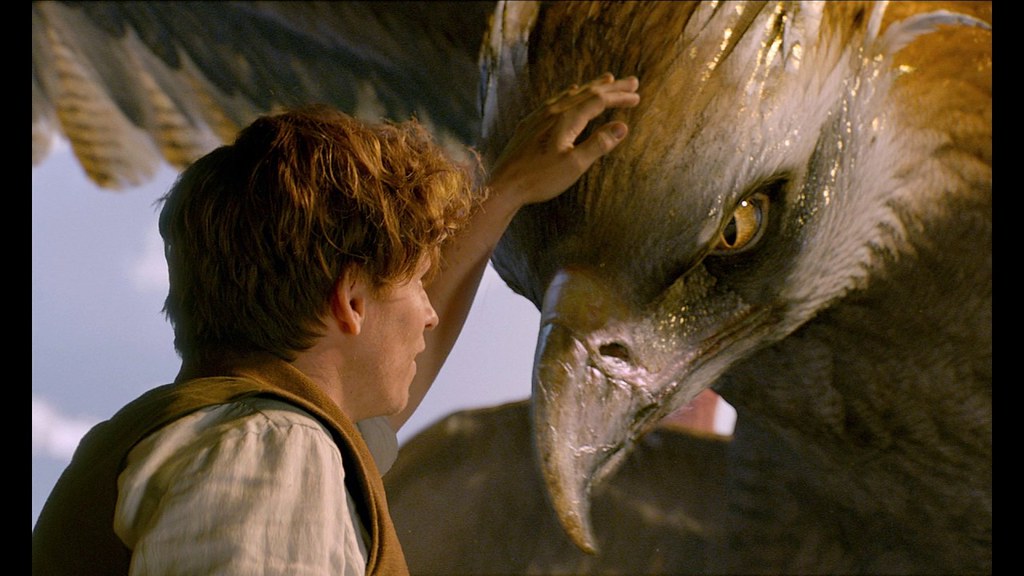 All in all, Fantastic Beasts and Where to Find Them is a great film. It is one of the best films of the year—or even the best film this year thus far. Eddie Redmayne is super awesome! He really suits the role very much. J. K. Rowling really has picked the right choice for the lead role. Eddie Redmayne is indeed an excellent choice after all. I am excited to see more of Johnny Depp in the next film as well. The magic is remarkable, magnificent, and awesome. It’s just great, truly. I am so excited to see all the magic once again. There are some points where I think the changing from one scene to another scene is too fast. However, I think I can overlook them since the overall story is very excellent indeed.

I give Fantastic Beasts and Where to Find Them 9.5 out 10 stars. I love love this film!