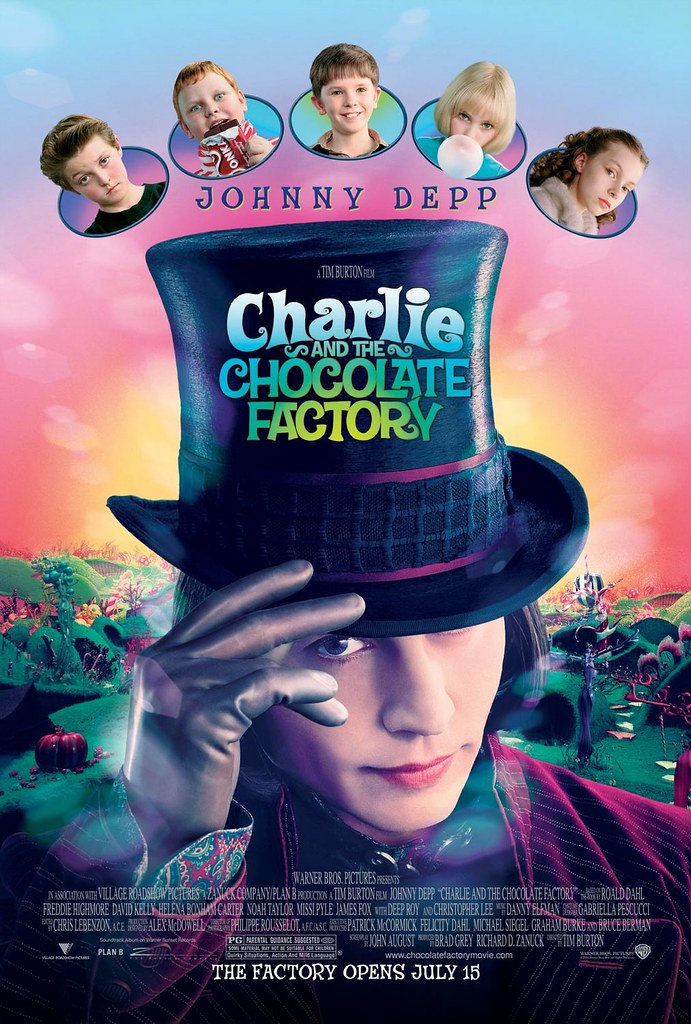 Based on the beloved Roald Dahl tale, this comedic and fantastical film follows young Charlie Bucket (Freddie Highmore) and his Grandpa Joe (David Kelly) as they join a small group of contest winners who get to tour the magical and mysterious factory of eccentric candy maker Willy Wonka (Johnny Depp). Aided by his diminutive Oompa Loompa workers (Deep Roy), Wonka has a hidden motivation for the tour, one that he will reveal only after the children in the group show their true colours.

I’ve watched Charlie and the Chocolate Factory way back and suddenly I’ve missed it. So I decided to watch it again. As expected from Tim Burton, his films are always full of fantasy and imagination. Charlie and the Chocolate Factory is also one of his accomplishment. The basic story idea is also very great. The combinations made this film a success, at least to me. With Johnny Depp played the character of the eccentric Willy Wonka, I just can’t ask for more. Depp is really great at playing unique and eccentric characters. He has made a great impression and iconic and memorable character as Willy Wonka. I must admit, Johnny Depp is really unique and not mainstream at all. It’s always great to see the character he chose every time.

I never read the book before or watch anything about Willy Wonka, but the idea of Willy Wonka’s chocolate factory really excites me. How so? Well, it’s because I love chocolate more than anything. And to see such amazing chocolate factory is really a pleasure. I know there’s no way a real chocolate factory would be like Willy Wonka’s, but what’s more important is not what’s real and what’s not. It is the imagination that counts. The first time I watch this film is 11 years ago—yep, it’s been ages ago—and I was 13 years old or something back then. So you can imagine how a 13-year-old girl would react when she saw this kind of film, especially when chocolate is the thing that she loves the most. It’s superb and fascinating! I would do anything if I can get inside that kind of factory—well, perhaps not anything. I can’t believe it’s been ages ago since this film is released.

“Everything in this room is eatable, even I’m eatable! But that is called “cannibalism”, my dear children, and is in fact frowned upon in most societies.” – Willy Wonka

In a matter of the story, Charlie and the Chocolate Factory is pretty simple. When I watched it at first, I think it’s pretty extraordinary. But now, I want more. I think it’s because the story is so simple and now that I understand more, I want a more complicated story. However, I do understand that this film is mainly for children, so I think the story line fits. Charlie and the Chocolate Factory really spoiled you in terms of imaginations. And those imaginations are not limited for children only. Even the adults, especially the patisseries, wanted to make their own Willy Wonka’s chocolate factory, where you can eat everything, where everything is made of chocolate. Isn’t it wonderful if you have a place like that? At least for those who like sweets and chocolates, that place would be like heaven on earth.

No need to speak of setting because the factory is already amazing. The costume is rather usual, nothing really special, except perhaps Willy Wonka’s. The visualisation is extraordinary but you can still see that it’s made of CGI effects. However, 2005 is not 2016, so there must be some flaws in a matter of technology so I think I can skip that part. At least the chocolate waterfall looks pretty real to me and so does the garden.

I give Charlie and the Chocolate Factory 7.5 out of 10 stars. Not because I love chocolate–I do love chocolate, by the way, but that’s not the reason—but because the story and the imagination are really extraordinary.

2 thoughts on “Charlie and the Chocolate Factory (2005) | Film Review”