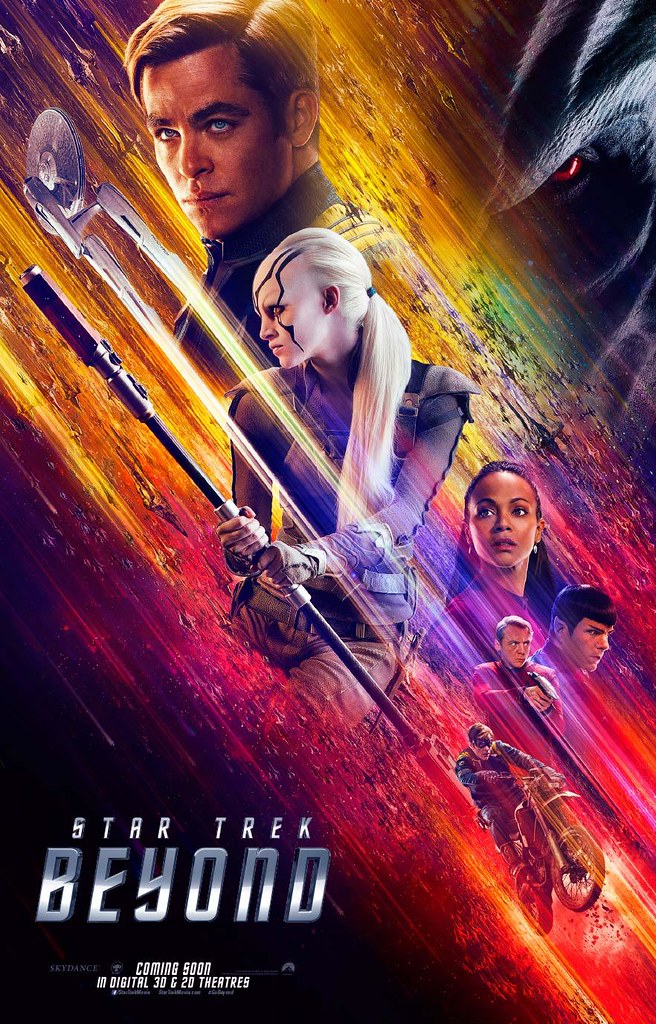 A surprise attack in outer space forces the Enterprise to crash-land on a mysterious world. The assault came from Krall (Idris Elba), a lizard-like dictator who derives his energy by sucking the life out of his victims. Krall needs an ancient and valuable artefact that’s aboard the badly damaged starship. Left stranded in a rugged wilderness, Kirk (Chris Pine), Spock (Zachary Quinto) and the rest of the crew must now battle a deadly alien race while trying to find a way off their hostile planet.

Star Trek is really one of the longest trilogy films that I’ve watched. Waiting for the next film really takes 3-4 years. From Star Trek (2009) to Star Trek Into Darkness (2013) to the current Star Trek Beyond. I was kind of excited when they finally told the release date of Star Trek Beyond. Though unfortunately, before the film is released, Anton Yelchin who played Chekov has passed away. Before him, last year, Leonard Nimoy who played the Spock Prime—or Ambassador Spock—also has passed away. This film has put some tributes to him and also for Anton. It’s so sad to think of it. I really like the character of Chekov. He made the film more fun and funnier somehow and to think he’s gone is just sad.  Not to mention Anton Yelchin portrayed his character really well with the accent and such. And of course, Leonard Nimoy was an icon himself.

Before I start discussing this film, let’s start with their cool posters. The character posters are so beautiful and attractive. They are very colourful! The fact that they used the colour of their ranks and position is very smart and makes the poster more interesting. 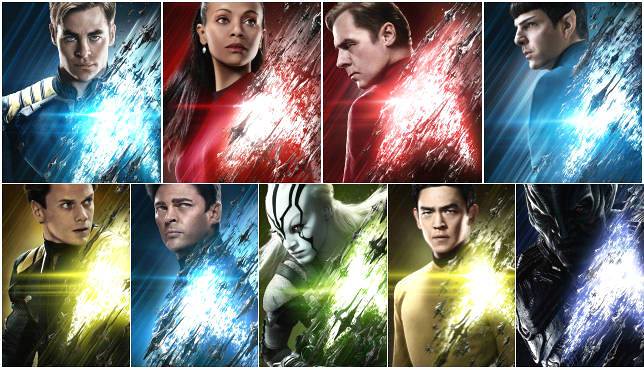 I think Star Trek Beyond is the best Star Trek film of all three. It’s more emotional and the characters are more interactive to each other than before. In the Enterprise’s bridge, they usually only interact with Captain Kirk, but now, it’s more. I like the relationship that grows between Spock and Bones. They are so funny together. Bones are pretty to the point when he speaks, sometimes with lots of metaphors, while Spock is more composed and he speaks with riddles and so on. In short, Bones is the guy who can bend rules, while Spock always sticks to the rules. It is really funny when the two of them interact. I am very glad to see them together more in Star Trek Beyond. I also like Captain Kirk together with Chekov and Scotty. The three of them made good combinations as well. Scotty is always as funny as ever and Chekov still looks quirky like before. As for Captain Kirk, well, what can I say? He’s a great captain with a good combination of courage, knowledge, and fun. Chris Pine really suits the role very much.

Aside from them, I also like Zulu and Lieutenant Uhura. Zulu looks pretty cool himself when operating the ship. I still remember in Star Trek Into Darkness, Zulu looks really impressive as acting-captain when replacing Captain Kirk for awhile. As for Uhura, she has her own charm. I think you can’t deny the fact that Zoe Saldana is great when playing unique characters. After playing as Neytiri in Avatar (2009) and Gamora in Guardians of the Galaxy (2014), I think it’s no doubt that she is a great actress. Even though this time she didn’t any weird role but her capability of linguistics where she understands many aliens’ languages is impressive and unique enough. Actually, I really like Captain Kirk’s team. They really are a good team. They are like family. Their unique and different personalities are combined together can actually make a great team after all.

Star Trek Beyond adds more laugh and that makes it even better than the previous films. Even the storyline is better. I really like it. It’s more complicated in a matter of the story. Although the second film, Star Trek Into Darkness, is pretty complicated and interesting especially with Benedict Cumberbatch in it, I think Star Trek Beyond is pretty much better in overall case.

The acting of the actors and actresses in Star Trek Beyond are superb. The actions are thrilling and exciting. The comedies are in the right amount. I don’t find it boring at all. How do I know that? Because I survive until the end of the film without yawning, whereas the first film made me fall asleep in the beginning, while the second made me fall asleep in the middle of the film. So yeah, this third film is practically better. I think it’s because the actions are more than the talking. I don’t really like an action film with too much talking. Come on, it’s an action film, not a drama film. Of course, the action should be more than the talking right? Too much talking will make me feel sleepy. Captain Kirk’s team got more portion in Star Trek Beyond than before. In the previous two films, you won’t see as much Chekov or Sulu or Scotty as in this film. That’s why I like this film more. Because I like the other members also take major parts.

Let’s talk about the other characters as well. Sofia Boutella played the character of Jallah. She’s good. Her fighting skills and knowledge are great. I think she’s a good combination with Scotty. They are both very smart in terms of engineering. As for the villain, Idris Elba played as Krall, the makeup artist really did a good job with him. I mean, I didn’t even recognise him at all. Truly. And then there’s also Krall’s right-hand man, Manas, who is played by Joe Taslim, an actor from Indonesia. He’s such a great actor. I’m so proud that an Indonesian actor can take part in a Hollywood film, especially a big film like Star Trek. His role here can’t be underestimated or even overlooked. He did play a role in Fast & Furious 6 (2013), though it’s a small part. It’s great that he played a bigger role now. A role that you won’t even miss out. However, since the makeup artists are so great, you won’t even recognise him as Joe Taslim.

“Better to die saving lives, than to live with taking them. That’s what I was born into.” – Captain James T. Kirk

The part in the film that mostly has been talked about is, I think, Zulu’s private life. I think it’s a clever decision. In the film, they don’t put it too much attention, because they don’t want to make that Zulu’s private life to exposed or to highlight it just because he is gay. I think they want us to think that these crews are not only saving strangers’ lives or their bosses’ lives but their families’ lives too and they happen to choose a gay couple to visualise their intentions—which I don’t think is a problem. I don’t understand if some people think that telling Zulu is a gay is kind of pointless because I don’t think that’s the point. If it’s the point, then they should have put more attention to it, right? But they didn’t, so why we must take the negative? I think it’s kind of beautiful when you look at Zulu and his family. They didn’t make it too much. They just made Zulu and his family, a loving and happy family, which in my personal opinion, looks beautiful and not a problem at all.

In summary, I really like Star Trek Beyond. It’s funny and full of actions. All of Captain Kirk’s crews showed up in more portion than the previous films and that’s more I like it. Not that I don’t like Chris Pine, but I think with all the team are gathering more and interactive more, it gives the story more lives and spirits and emotions. Good job for the Simon Pegg and Doug Jung who have written such story.

If you asked me am I a Star Wars or Star Trek fan, I would say neither. I mean, I like both franchises though I don’t dare to say I’m a fan. Yes, I collect Star Wars Lego, but it’s more because I like Lego, rather than I like Star Wars. But if I have to choose Star Trek Beyond and Star Wars: Episode VII – The Force Awakens (2015), I will definitely choose Star Trek. Sorry, Star Wars fans! But in the end, both stories are so different and it’s difficult to actually compare them. They did take space as their setting, but the overall story is so different. Therefore I think it’s quite unfair to compare them. But well, who am I to judge anyway? I still think both films have their own uniqueness and qualities.