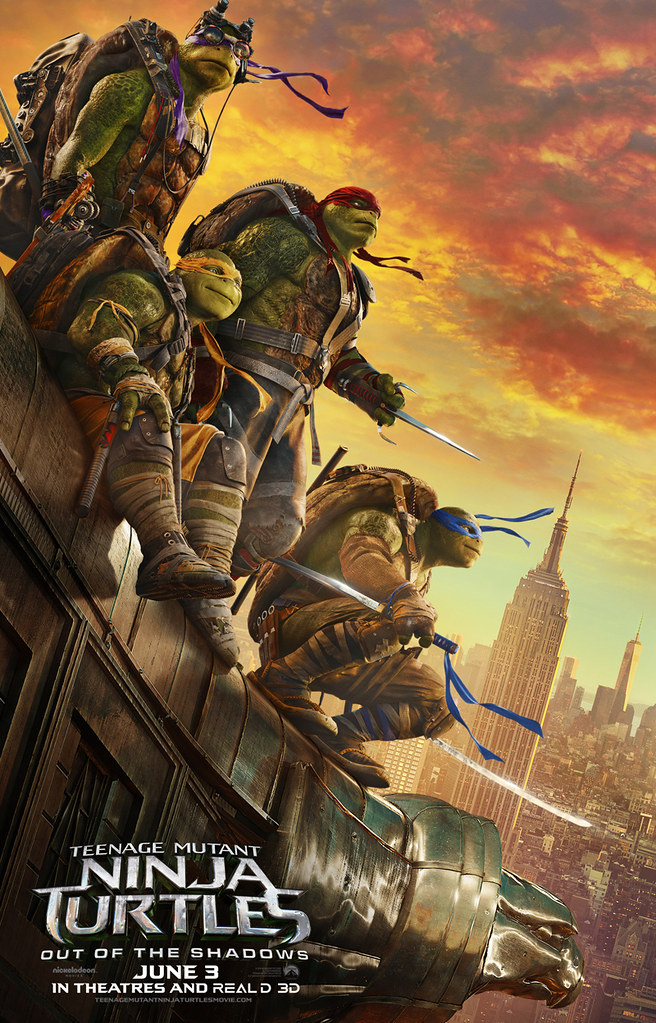 The turtles face a new challenge when Shredder escapes from custody and joins forces with Baxter Stockman, a mad scientist who plans to use a serum to take over the world. Along for the ride are Bebop and Rocksteady, two dimwitted henchmen who provide plenty of muscle. Luckily, the turtles have their own allies in April O’Neil, Vernon Fenwick and Casey Jones, a hockey-masked vigilante. As the pizza-loving heroes prepare for battle, the notorious Krang also emerges to pose an even greater threat.

The last time I saw the first film, Teenage Mutant Ninja Turtles (2014), I love it a lot. The film is funny. That’s why I expect quite much this time. And I must say, I am not disappointed at all. Teenage Mutant Ninja Turtles: Out of the Shadows is still funny as ever. Perhaps even funnier. Since I almost forgot the story of the prequel, I kind of confused when I see the character of Shredder. I don’t remember him in the first film. And then I just found out that they are indeed played by different actors. Now, that explains a lot why I can’t remember that character. I remember there was a villain named Shredder but I don’t remember Brian Tee playing it. I guess my memory is right. I don’t know the reason why they changed the actor but I think Brian Tee did a pretty great job of playing the role of Shredder.

As for the story itself, I won’t really compare it with the first film. Because to be honest, I don’t really remember it all. I remember the funny stuff but other than that, I only have just a glimpse. So I will review Teenage Mutant Ninja Turtles: Out of the Shadows only without much comparisons to the previous film. Since they didn’t tell about the origins of the turtles anymore, we got straight to the point of the problem. Although in the beginning, I don’t really get it why April O’Neil did a stake out. I don’t know if it’s me who didn’t pay much attention because my sister asked me about something, or they didn’t really tell it clearly in the film. But seriously, Megan Fox as April O’Neil is super sexy. Well, she’s indeed super hot and sexy. I think being a mother has changed her. She looks absolutely stunning.

“You shouldn’t want them all to think the same, it’s their different points of view that make the team strong. A good leader understands this. A good brother accepts it.” – Splinter

The four turtles brothers are as funny as ever, and now they are facing new problems between them. Michaelangelo (orange mask) is still the funniest of all, but Raphael (red mask) did have his moments. As for Leonardo (blue mask) and Donatello (purple mask), they both also have their moments too. In conclusion, the four of them is funny. However, not only the turtles are responsible for the comedy because Will Arnett as Vernon also has some funny scenes too. The action for this film is not as thrilling as Batman v Superman: Dawn of Justice (2016) or even X-Men: Apocalypse (2016), but at least I am very entertained. Seriously, it’s been awhile since I laugh so much when I watched a film. Captain America: Civil War (2016) is funny at some point, but it was nothing compared to this film.

Other side characters such as Bebop and Rocksteady, added some value to the story as well. They are dumb but funny. Annoyingly refreshing. However, the real villain, Krang, is somehow ridiculous. Not in a good way, but in a bad way. I think there are some points where the scenes are confusing and unnecessary. I won’t tell you what, but you’ll get it if you watched the film. But I don’t know if it’s just me or you’ll think the same too.

Overall, I really like Teenage Mutant Ninja Turtles: Out of the Shadows. It is not a perfect film but it is indeed entertaining and there are lots of humour indeed. The flaws can be overlooked since the film is very funny. The actions and stunts are not bad either, so yep, this film is enjoyable to watch.

I give Teenage Mutant Ninja Turtles: Out of the Shadows 8.5 out of 10 stars.