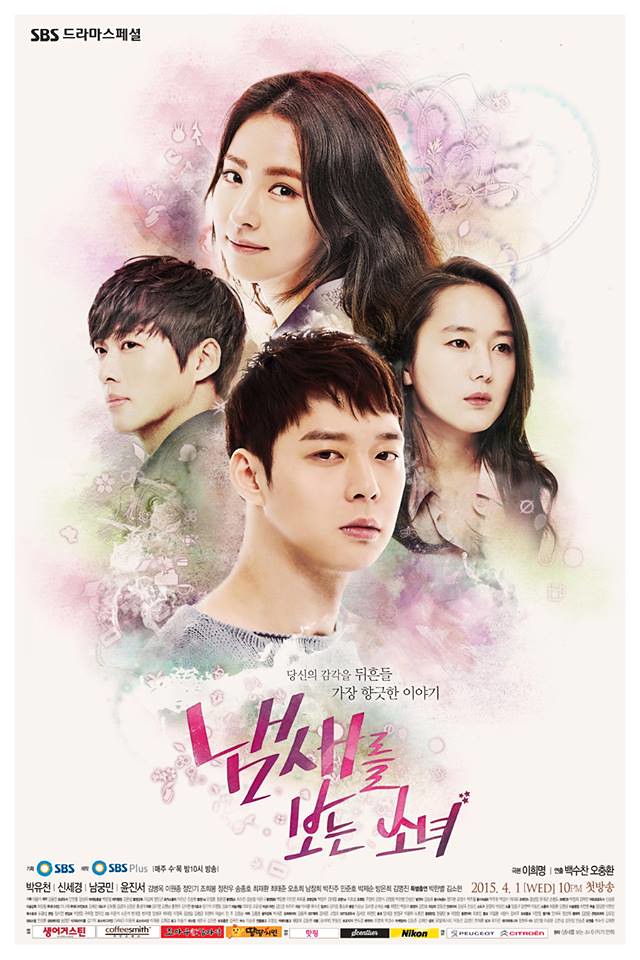 Choi Eun-Seol (Shin Se-Kyung) arrives home to find her parents murdered. When the murderer is distracted, she escapes but is hit by a car. Eun-Seol’s parents are later found with a barcode carved into their skin, the work of the “Barcode” serial killer. The lead detective on the case, Oh Jae-Pyo (Jung In-Gi) realises that the now-comatose daughter Eun-Seol is the sole surviving witness.

On that same night, Choi Mu-Gak (Park Yoo-Chun) is at the hospital visiting his younger sister, also named Choi Eun-Seol (Kim So-Hyun), who’s being treated for mild injuries after a bus accident. But when he returns to her bed, he finds her dead with her throat slit.

Six months later, Eun-Seol comes out of her coma. But she has no memories at all of her life before waking up at the hospital, and her left eye has turned green with no scientific explanation. She has also gained the unique ability to “see” smells as visible colours and shapes, and can even trace where people have been because their lingering scents are like a trail. To protect her, Jae-Pyo adopts her and invents a new life for her, telling her that he’s her real father and that her name is Oh Cho-Rim. Another six months pass and Cho-rim is a cheerful girl who’s adjusted to her ability. She dreams of a becoming a comedian and works as a gopher for a small, struggling theatre company called Frog Troupe.

On the other hand, Mu-Gak had been so traumatised by his sister’s death that after two months of no sleep and constant pain, he’d fainted and was clinically dead for ten days. When he woke up, he’d lost the sense of smell and taste and is unable to feel pain. And unlike his previous warm personality, Mu-Gak is now stoic, emotionless, and speaks in a monotone. He leaves his job at the aquarium to become a police officer, vowing to reopen the case and catch the killer. But to do so, he must first get promoted to detective and has to prove himself to the head of the homicide unit Detective Kang Hyuk (Lee Won-Jong) in ten days or else never ask for a promotion again. Cho-Rim also needs a skit partner for her upcoming audition in ten days, and when she offers to help him with his cases in exchange, they decide to team up. After a model (Park Han-Byul) turns up dead, seemingly another victim of the Barcode serial killer, Mu-gak joins the investigation headed by Lieutenant Yeom Mi (Yoon Jin-Seo), and he hones in on two possible suspects: the model’s boyfriend, Chef Kwon Jae-Hee (Namkoong Min) and her doctor (Song Jong-Ho).

At first, I don’t really like The Girl Who Sees Smells. Until the end, I still don’t really like it. Perhaps it’s because I don’t know and don’t really find the main actor and actress interesting. Even though one of the actors interest me, I am still not fond of this Korean drama. However, the story itself is quite interesting and exciting. Some scenes may seem not good and a little bit awkward, but the basic story is interesting. It makes me wonder and keep watching it. Although I don’t really pay too much attention—at least not until in the middle of the series, but then I find The Girl Who Sees Smells quite thrilling in the matter of the story. At least they did provide a good story. The first few episodes are indeed boring, like really boring that I really became sleepy when I watched it. However then as I went through mid-series, the story became more and more interesting. At least I am curious about what will happen next.

“All detectives always feel something heavy in their heart even after catching the criminals but they just put it aside and continue with the next case.” – Mu-Gak’s Senior

What’s most interesting of The Girl Who Sees Smells is Cho-Rim’s ability to see smell. When my sister first tells me about this drama, I found it confusing. I mean, how the hell you can see smells? Smell it of course, but see? That’s kind of new. I think that’s the best part of this series after all. And yes, I always know about Korean dramas from my sister, except Descendants of the Sun (2016) which was really booming and seems to be everywhere. I literally see it everywhere. Instagram, Path, Line, everywhere.

Anyway, let’s get back to this Korean drama. Since I like a fantasy story, I think that is why I basically like the idea of The Girl Who Sees Smells. The murder cases are just a plus point which makes me more interested in this TV series. Somehow, lately, I’ve been watching Korean dramas with a murder case. I don’t know why. Is it just Korean dramas’ pattern or it’s just me. I think it’s just me, though. Not all Korean dramas include a murder case, of course. I like Korean dramas with a twist or at least, it was funny enough to be watched. The Girl Who Sees Smells is not funny despite being put in a comedy genre, but it definitely has the twist that I was hoping for. Yes, a murder case. Before you think of anything, I am not a psychopath. I just like an intriguing story. 😂 😂

Park Yoo-Chun and Shin Se-Kyung actually played their characters really well. However, I am not really interested in them. Nonetheless, they give an adequate chemistry together as Choi Mu-Gak and Oh Cho-Rim. Not great, but definitely not bad either. Do I feel excited when seeing them together? Not really. I think it’s because there aren’t many sweet scenes happening between them and therefore made me not pretty excited waiting for them. There are some sweet moments, but I think it is not enough. Park Se-Kyung is good in portraying her character but I can’t really sympathise with her feeling. She looks sad but as an audience, I can’t really feel her sadness. Don’t get me wrong. She played her character really well. However, it’s just she can really make me sympathise with her.

I do feel interested with Namkoong Min. His character, Chef Kwon Jae-Hee in the series is rather interesting. I think Namkoong Min is a great actor. His expressions are very good, even better than Park Yoo-Chun.

Anyway, the overall story of The Girl Who Sees Smells is pretty good actually. Despite the fact, I am not interested in the main actor and actress. The first few episodes are also pretty much boring. At any rate, it turns out to be quite thrilling after mid-series.

To that end, I decided to give The Girl Who Sees Smells 7 out of 10 stars.