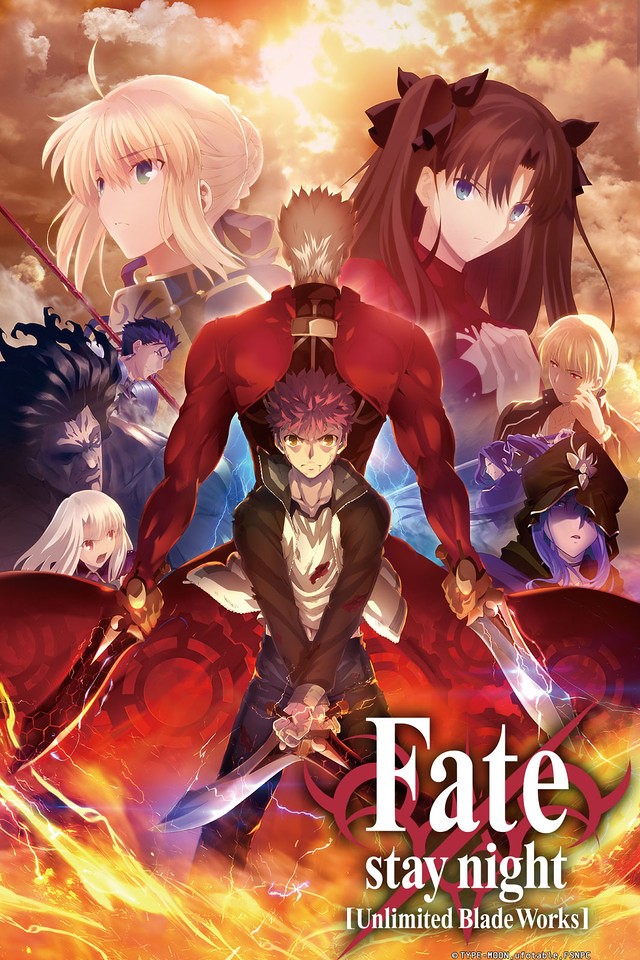 Fuyuki City is the setting for a secret and violent war among competing magi. For the past two centuries, seven sorcerers have gathered and engaged in a battle royale known as the Holy Grail War, each gambling his or her own life to obtain the Holy Grail, a legendary chalice capable of granting wishes. The past four Holy Grail Wars have typically occurred every sixty years or so. However, the fifth war has started prematurely, with the most recent concluding less than a decade ago.

The seven sorcerers, known as Masters, are aided by seven beings known as Servants, reincarnations of legendary heroes from all time. These resurrected souls possess superhuman characteristics and wield powerful artefacts or abilities called Noble Phantasms, symbols of their heroism during life. Only one Servant can be summoned in each war from one of seven classes: Saber, Archer, Lancer, Berserker, Rider, Assassin, and Caster, each representing their distinctive role in the battle. The Servants are summoned by the power of the Grail itself and aid their Masters in doing battle, protecting them from harm and killing other Servants or Masters. In return for their aid, the Servants also seek their own wish from the Holy Grail, should their Master become victorious.

Emiya Shirō is a serious yet helpful, hardworking, and honest teenager and a student at Fuyuki High, whose parents died in fire years ago, around the time of the conclusion of the Fourth Holy Grail War. He was then adopted by Emiya Kiritsugu. When he was a child, his adoptive father told him how he had failed at his life ambition to become a “Hero of Justice”. Shirō affirms to his adoptive father that he intends to devote his life to achieving that distant ideal, much to Kiritsugu’s chagrin. To do this, Shirō pleads with a begrudging Kiritsugu to teach him sorcery; but being born without the capabilities of a magus, Shirō proves to be talentless in almost all the fundamental sorcerous disciplines. Kiritsugu dies in Shirō’s youth. From then on, he grows up as an orphan in the occasional company of Fujimura Taiga, his English teacher at Fuyuki High, and Matō Sakura, his underclassman.

After cleaning his school’s kyūdō dojo late one night, Shirō stumbles upon two Servants, Archer and Lancer, battling in the school courtyard. Upon accidentally revealing himself, Shirō runs away. To avoid compromising the war’s secrecy, Lancer hunts down and pierces Shirō’s heart with his Noble Phantasm, a long, red spear. Shirō is then discovered in a near-death state by Tōsaka Rin. For the sake of her sister Sakura Matō who has feelings for him, she uses an heirloom filled with concentrated magic to restore his damaged heart and leaves before he awakens. Shaken and dazed, Shirō picks up the heirloom and returns home only to be assaulted a second time by Lancer. Shirō weakly defends himself against Lancer using posters he strengthens with magic but is soon overwhelmed by the powerful Servant’s attack. Before Lancer can inflict another fatal blow, a magical mark on Shirō’s hand begins to light up and a magical circle inside the shed begins to glow. A young woman clad in armour with an invisible sword appears in a flash of light and blocks Lancer’s attack. After driving Lancer away from Shirō, she introduces herself as “Servant Saber”, and formally announces her intention to fight under Shirō for the Holy Grail.

Meanwhile, Rin has realised that Lancer will return to finish what he started and rushes to the aid of Shirō, only to discover that Shirō is safe and has gained his own Servant.

I accidentally see Fate/Stay Night: Unlimited Blade Works on Youtube when I saw a video about one of the coolest anime characters. I get interested and tried to watch it. I must say, I am not disappointed at all. The story is exciting and intriguing. Archer is indeed very cool and unpredictable, of course. I like him. Gilgamesh’s power is pretty powerful and awesome. He is one of the servants from Archer class. I think all of the servants are interesting, especially Archer, Saber, Assassin, and Lancer. Tōsaka Rin as a master is also pretty cool and powerful. I also like Illyasviel von Einzbern—or usually called Illya—because she is cute and powerful and beautiful. 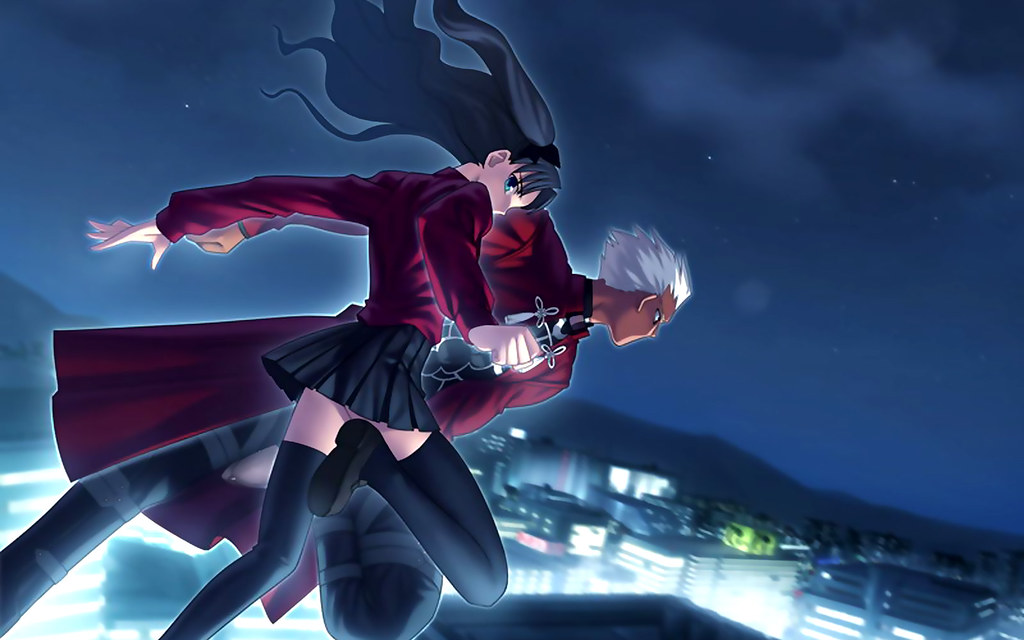 Anyway, let’s talk about the story. Fate/Stay Night: Unlimited Blade Works is indeed interesting. The fight and the storyline are all good to me though I think not as exciting as when I watched Hunter x Hunter (2011). I am not saying it’s bad because I think this anime is actually good. But I think it could be better. The ending is rather unpredictable, which more I like it since a predictable ending is not good at all. When Archer’s true identity was finally revealed, I am pretty shocked. Who would ever guess that? Perhaps at some point, but truly, in the beginning, you won’t even think about that kind of ending. At least I don’t. It is better to watch Fate/Zero (2011-2012) first rather than Fate/Stay Night: Unlimited Blade Works because Fate/Zero told you about the previous Holy Grail War. But then again, it doesn’t matter if you watched this one first actually. At least I did watch this one first and I am not in the least disappointed. As for the drawing itself, they are good. Excellent is truer. Archer and Gilgamesh look very awesome and cool. I think I like Archer’s persona more, though. I guess he is one of the coolest anime characters after all.

“Fighting for others, but not yourself, is nothing but hypocrisy.” – Archer

As for Shirō, despite being the main character, I don’t think I like him much. Sometimes I like him, other times I don’t. The funniest thing about the true identity of the servants is the true identity of Saber. I kind of guess but I thought it was impossible. But then again, nothing is impossible in the world of anime or stories in general. As for other servants’ true identity, not everyone was mentioned. Just Archer’s and Berserker’s. Gilgamesh is already his true identity and he is really indeed a strong servant from Archer class. I am rather curious of Sakura Matou’s fate. She is the girl that likes Shirō. At least that’s how I saw her. After the incident in the school, I didn’t know her fate. I know she’s safe but then she was always there with Shirō but all of sudden she never showed up again. I heard they are making a sequel film and I saw Sakura on the poster. So I guess her story will be revealed in the sequel. Can’t wait to watch it. I have a little bit confusion with Fate/Stay Night (2006) because I read the synopsis, it’s pretty much the same with Fate/Stay Night: Unlimited Blade Works. I guess this is a remake or something because my friend has mentioned to me that they kept developing this anime.

Even though the fighting scenes are good, I don’t really like the personalities of the characters. True, I think Rin is very cool and so do the servants, especially Archer or Gilgamesh or Saber. What I don’t like is their personality. So even though they have bloody amazing skills and look, the personalities just don’t cut it. Nonetheless, the overall idea of this anime is pretty cool and amazing. The drawings are also very impressive and therefore you can manage to enjoy Fate/Stay Night: Unlimited Blade Works a little bit more. The outfits look great, as well as the weapons.

Basically, Fate/Stay Night: Unlimited Blade Works is a great anime. It is exciting, enjoyable, and worth to watch. Especially if you like a story that has battles and war. This anime definitely offers a good battle. If you’re looking a funny anime, I don’t think this is the right one for you because they don’t offer any laugh here. Only serious things. It’s a good serious but can be boring sometimes.

Still, I give Fate/Stay Night: Unlimited Blade Works 8 out of 10 stars.