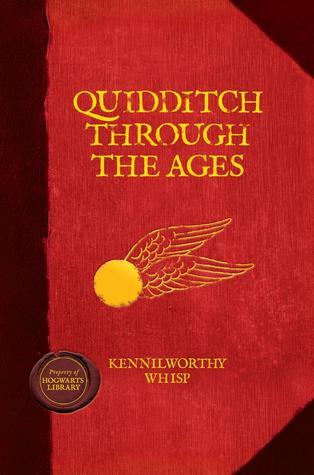 If you have ever asked yourself where the Golden Snitch came from, how the Bludgers came into existence or why the Wigtown Wanderers have pictures of meat cleavers on their robes, you need Quidditch Through the Ages. This invaluable volume is consulted by young Quidditch fans on an almost daily basis.

Proceeds from the sale of this book go to Comic Relief, who will use your money to continue improving and changing lives – work that is even more important and astonishing that the three and a half second capture of the Golden Snitch by Roderick Plumpton in 1921.

Quidditch Through the Ages is like a textbook about a magic sport in Harry Potter world and of course, the sport is called Quidditch. Like Fantastic Beasts and Where to Find Them, J. K. Rowling has succeeded in making a real textbook about the Wizarding world. When I read Quidditch Through the Ages, I felt like I am reading a history book of a sport, a real sport. Despite like reading a history book, it is actually fun, really. You just can’t stop feeling mesmerised of how Rowling managed to think things like those things.

I am sure you all have watched Harry Potter—if you haven’t, then what’s the wait? It’s like one of the best films ever—or read Harry Potter books, then you’ll know some few things about Quidditch. If you haven’t done both, let me explain to you. So basically, Quidditch is a sport in Wizarding world. It’s like basketball in our world, but the differences are they use broomsticks and there are three balls during the game. One ball is like the ball in basketball games and this ball is called Quaffle. The chasers are in charge of catching the ball and throw it into the opponent’s hoop and strike a goal. Then there’s a Bludger, which is basically a ball to knock out all your opponents. The two beaters in each team will bring a wooden bat—like baseball bat—to hit the Bludger to the opponents or anyone, including the referee. Quite interesting one, isn’t it? And the third ball is the Golden Snitch which worth 150 points. If the seeker catches the Golden Snitch, the game is over and most of the times, your team will win.

“Although people rarely died playing Quidditch, referees had been known to vanish and turn up months later in the Sahara Desert.” – Kennilworthy Whisp

Like Fantastic Beasts and Where to Find Them, in which J. K. Rowling uses the pseudonym name of Newt Scamander, J. K. Rowling also uses a pseudonym name of Kennilworthy Whisp for Quidditch Through the Ages. It is said that Whisp is a famous author and a Quidditch expert as well. I think that’s a smart thing at every level. So Quidditch Through the Ages is a book that explains about Quidditch, how the sport started and how can it ends like now. I really enjoy the book, despite hate reading a textbook when I’m in school, I do enjoy this ‘textbook’. I didn’t need a long time to finish the book since it isn’t so thick and it is a light-reading book. If you are a Potterhead, I don’t think you should skip this book. This is a must-buy, must-have, and must-read book. I really like this book. It is interesting, it is fun, it is enjoyable. Salute to J. K. Rowling!

I give Quidditch Through the Ages 4.5 out of 5 stars.

1 thought on “Quidditch Through the Ages by J. K. Rowling | Book Review”